There are certainly a lot of places where the seeds for Bridgeport’s first-ever Class AAA state baseball championship was planted. At least part of those seeds stretch way back to 1993.
If the year sounds familiar to BHS baseball fans it should. That was the year the Indians earned their first-ever Class AA state baseball title.
There were plenty of talented players on that team that made school history long before any of the members that just made history were even close to being born. That said, there is still a connection. And it is an important one. 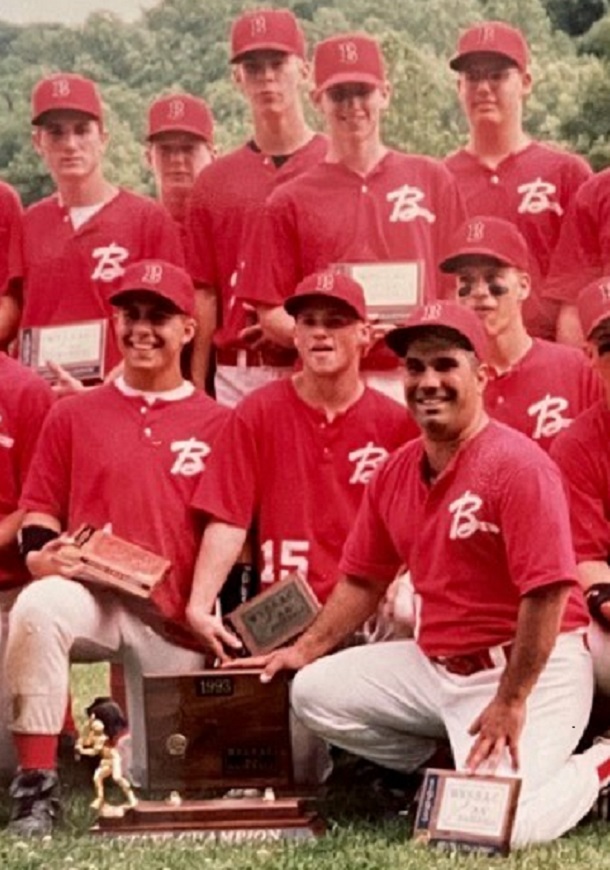 Two members of the ’93 team’s roster were Robbie Buffington and Aaron Mann. Two members of the 2021 team’s roster were Conner Buffington and Austin Mann. The names just are not coincidentally the same – they are father and son.
There is one other thing familiar. Robert Shields coached all of them. And although it is not the first time this has happened during the Tribe’s incredible span of seven-straight state championships, he said he is fairly certain it is the first time he has had two members of a team whose fathers played on a past team.
“Just like their fathers, those two were important to what they did and it’s amazing to me to see them play and compete because their personalities are the same,” said Shields. “Those two juniors are a lot like their fathers, and that’s a good thing.
“The thing with Austin and Conner is they work hard, do what you ask them to do, and get the job done when it’s their turn,” Shields continued. “They’re consummate team players and that’s a result of a good upbringing.”
Ever the coach, Shields likes throwing out a challenge to his young guys. He talked about when the elder Mann and Buffington played for him. He recalled both being extremely strong players.
“Aaron was no-nonsense and just went at it every day with a business approach that he does with his business today,” said Shields of Mann who played at West Virginia Wesleyan. “There was no gray area with him; just black and white because he was a hard worker and 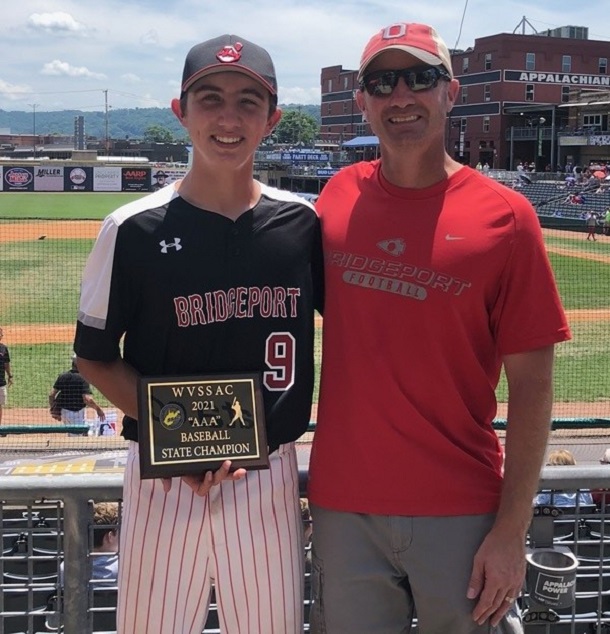 competitor. He didn’t like to lose.”
The Mann’s have some serious similarities. Both pitched and played third base.
“Aaron was probably a little bit more accurate than Austin is right now, but other than that, not much of a difference. They both keep the ball down now and dad might have the edge there, but I’ll give the nod to Austin since we’re ‘AAA’ now,” said Shields.
Austin did his damage on the mound this year with a 6-0 record that included two saves, a 0.72 ERA with 30 hits allowed, 11 runs (four earned) with 39 strikeouts and 11 walks. At the plate he batted .266 (4-for-15) with 16 runs scored, five RBIs, 14 walks and five stolen bases.
“Going after the title this year knowing my father had already won one made it fun and didn’t really add any pressure. Him being part of the first ‘AA’ team to win it and me being part of the first ‘AAA’ team to win it has special meaning and a blast to accomplish,” said Austin. “I would like to be able to get the upper hand next year with another ‘AAA’ title.”
While the demeanors are the same between the Buffington’s, some of the other things are not as similar. Robbie was a second baseman, while Conner is an outfielder. Shields was also quick to point out something Conner said, “I’ve heard it repeatedly from him” about Robbie.
“Robbie was extremely fast. He stole 60-some bases his senior year which is still by far the school record,” said Shields. “Conner can sure hit, but he doesn’t run like his dad. Then again, very few people ran like his father.”
Shields said he remembers Robbie showing up with Billy Joe and Joey Pecarro, Joe McNamee, and Aaron Williams to make sure the field was ready for the games or hitting in the cages. That prep work, Shields said, is there in the son. 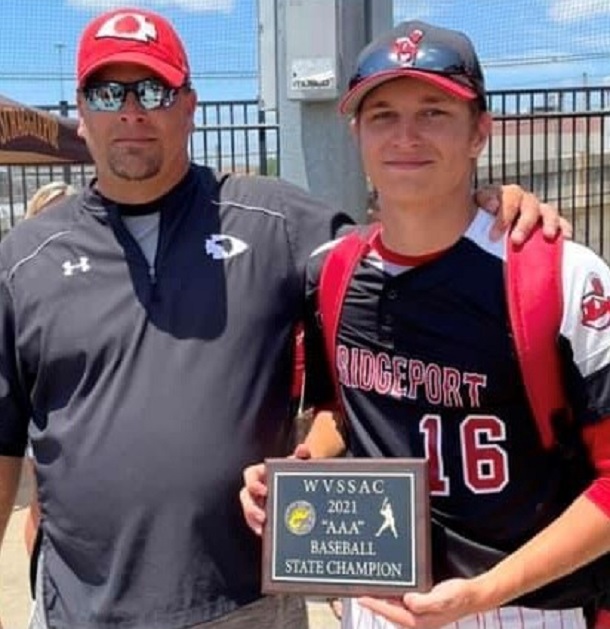 “I see Conner down there a lot with a buddy of his in the batting cage. You see the work ethic,” said Shields. “That, and the success that comes with it, is no accident.”
While he probably will not match dad’s speed, Shields said he does think he can match something else and surpass it.
“(Conner) could definitely have a senior year, even better, like his father because of that work ethic. Like it always is, it will be up to Conner to work to get there, and I have faith that can happen,” said Shields. “In fairness to both of those two, their fathers – Aaron’s accuracy and Robbie’s speed – would be hard pressed for anyone to match.”
The pressure of matching dad’s state title was not overbearing on Conner. However, he said it also was not a non-existent entity.
“There was a little bit of pressure to match my father and to keep the streak going, but it was more fun trying to match him instead of worrying about it,” said Conner. “He’s very proud of what he accomplished, and he should be with that first state title and it’s one of the reasons I look up to him.
“I don’t think I’ll beat that speed, but I think it would be a great father-son story for the son to get one more title than his father,” Conner continued. “I’d love to have one up on him and I’m pretty sure he’d be okay with that.”
Shields would be too. He is hoping to see more production from Buffington who hit .250 (8-for-32), and scored 15 runs, with eight RBIs, a double, and three stolen bases.
“I sure would like nothing better than to see those boys have one more title than their fathers. I’m sure their fathers would like that too,” said Shields.
Editor's Note: Top photo shows several members of the 1993 state title team with Robbie Buffington shown directly behind Coach Robert Shields with eye black on, and Aaron Mann standing first on the left. Second photo shows Austin and Aaron Mann, while the bottom photo shows Robbie and Conner Buffington after winning the 2021 Class AAA state title.