From the Bench: Thanks to Dedicated Education Pro, BHS Alum Winkie Sole Winner of National Award

By Jeff Toquinto on November 22, 2020 from Sports Blog

Carson Winkie has already shown that he is not like many in a number of ways – well beyond just being enrolled at Harvard and a member of the football team. There is one thing he is pretty much like the rest of us on.
When it comes to answering a phone call from an unknown number, chances are good Winkie is not answering. The one exception is if it 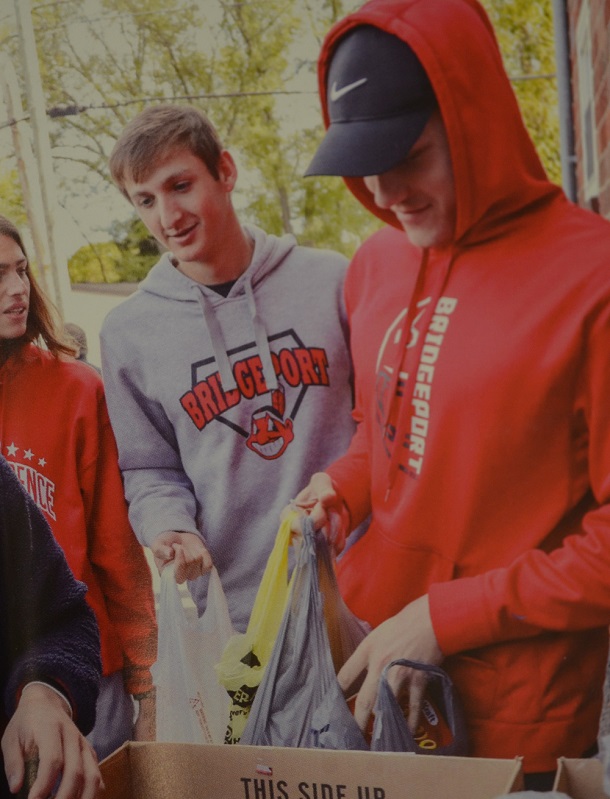 happens to be a Washington, D.C.-based area code.
Most recently, that trend of thought proved to be a good thing to the tune of thousands of dollars thanks to a Bridgeport High School counselor.
“I guess when I see a D.C. number, I think it might be important,” said Winkie, a 2020 Bridgeport High School graduate now a freshman at Harvard. “Turns out that was the case with this phone call because it led to something really crazy in a good way.”
Earlier this year, the phone call let him know he was a finalist for a national scholarship. It was the Turner Maurice Gauntt, Jr. Exemplary Citizen Award. Not really a problem to be a finalist, but one that was confusing to Winkie.
“It was crazy because I had no idea about it,” said Winkie. “I did not apply for it and wasn’t aware of it, but this turned out really good.”
Indeed, it did. Winkie would get another call soon with a non-descript number with a Washington, D.C. tag and when he answered, he got a bigger surprise. He was the winner – in fact, the only winner in the nation – for the scholarship.
“To get this was amazing, and it happened because someone cared to help out,” said Winkie.

The person that cared is someone who stepped up and assisted Winkie during his time at BHS. It is the same person who he said – as 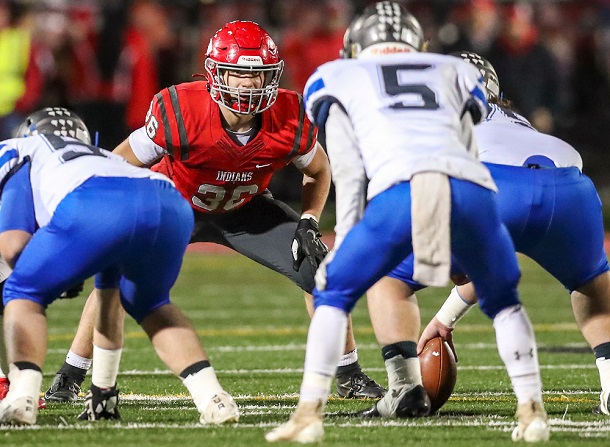 well as her boss Principal Matt DeMotto – has helped out student after student. The person in question is BHS junior-senior student counselor Jenna Edwards.
“When I found out I was in the running I found out it was Mrs. Edwards that applied on my behalf. I called her and couldn’t thank her enough,” said Winkie. “I watched her work with me and got to see her work with others. She helps everyone, and she is best at identifying people who don’t know they need help and getting them help they need.”
In this case, Edwards learned about the scholarship and it was Winkie that came to mind. She said he checked all the boxes at a high level.
“The scholarship was based on leadership in school, community service, character and kindness all things that are exactly what Carson is to his core,” said Edwards. “When I saw it, I immediately applied for it on his behalf by writing a letter of recommendation.
“It also had a component for athletic excellence because we know Carson is a great athlete,” she continued. “I don’t think I’ve seen many kids that were so every facet they were involved it. Even though this was a national scholarship with just one winner, I felt good about his chances because he puts his whole heart into everything and apparently it showed. He beat out thousands to get that scholarship.” 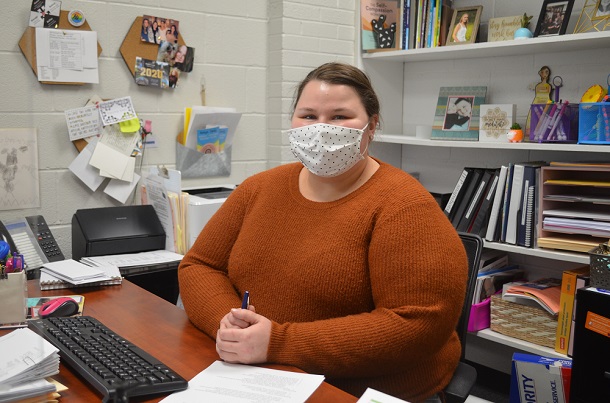 The feeing was justified. Yet, none of it happens if a professional in the school system does not go the extra mile they often do – and in most cases no one or very few know about it. DeMotto is one of those knowing exactly what Edwards does for the students.
“This scholarship speaks well of two people.  Carson for having earned it, and our counselor Jenna Edwards to apply for him,” said DeMotto. “Jenna is indicative of many of our staff members. I’m fortunate many of them do things of this nature without being told or asked.
“This is a perfect example of doing something only she knew about for a deserving student,” DeMotto continued. “In the end, one of graduating seniors benefitted. Again, it speaks highly of both of them.”
Winkie received a whole lot of scholarships, but attending Harvard is by no means a cheap endeavor. Learning there is by no means an easy chore, and it is one made more difficult by undertaking football.
“We were finalizing payments when the money was deposited with the school. It came at the right time, and just a great surprise,” said 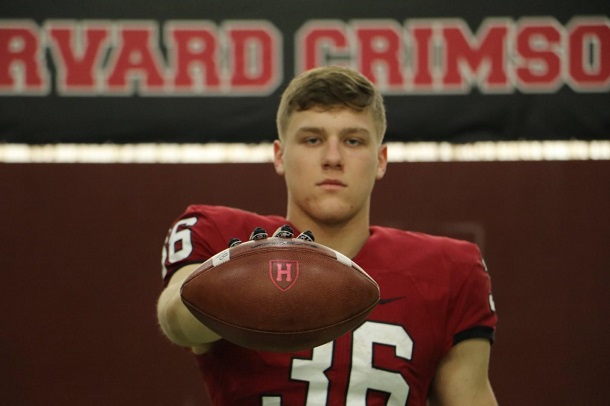 Winkie. “It took a little extra worry away at a time when things were uncertain.”
Things are actually still uncertain. Harvard has been 100 percent remote learning with freshman having the option to learn remotely on campus. Winkie took the option to study remotely and has been doing so from Morgantown, and he is not a fan.
“I’m not doing bad, but I’m not a fan at all of this,” said Winkie. “It is so much harder to build a connection with those involved in the learning process. The only benefit is it saved money by not having to live on campus.”
All things being equal, and COVID-19 has assured that is not the case, Winkie would rather be on campus. He also would rather be nearing the end of his first season of football. Instead, all Ivy League schools opted to not compete in any fall sports.
Now, Winkie has to make another decision. At Harvard, you have eight semesters to get your sports seasons in. Even with the NCAA granting a waiver for an extra year of eligibility, Winkie said things are the same at Harvard. Now, he has to decide whether to sit out the upcoming semester in order to get in four years of football. 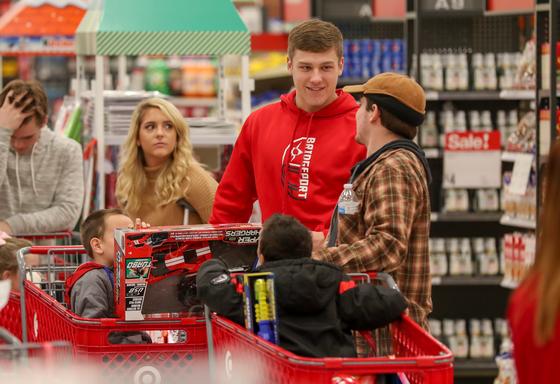 “I’m still undecided. It’s a difficult situation made harder by the announcement (the Ivy League) is not going to do any spring or winter sports on campus,” Winkie said. “I never imagined having to make a situation to stay enrolled or sit out, but it’s a decision I’m going to have to make soon.”
One thing has continued and that are individual workouts. He is in weekly contact with the coaching staff and constant contact with the strength and conditioning coaches.
“Even that is different,” said Winkie. “I personally enjoy being face to face and dealing with people because it just makes things easier. A lot that you thought was going to happen didn’t because this was unexpected. I guess the one unexpected thing that I did like was from Mrs. Edwards. I can’t thank her enough.”
The scholarship is for $4,540. Gauntt was a member of his high school’s National Honor Society, a football and basketball standout, as well as student body president. Gauntt attended West Point and served in the United States Air Force where he was one of the first Americans to fly twice the speed of sound. Gauntt passed in 2014.
The scholarship is presented by Constituting America, which is a non-profit created by his daughter and actress Janine Turner. The scholarship letter had to be just six paragraphs and explain how the nominee embodied the characteristics of loyalty, honesty, wisdom, service and sacrifice in the four cornerstone areas of the award: Stellar Academic Record, Athletic Excellence, Community Service, Student Body Leadership. Edwards said that made it easy.
“The resume speaks for itself. He’s just an amazing kid,” said Edwards. “He has huge dreams and I hope this helps him realize those dreams in a small way. I was so honored to do that for him and would do that for any student. It is so nice to see someone so deserving earn this scholarship.”
Editor's Note: Top photo shows Carson Winkie (in red) collecting food in the community with classmates for The Shepherd's Corner, while he's shown lined up during his senior year of BHS football in the next photo. Third photo shows Counselor Jenna Edwards, while Winkie is in his Harvard uniform in the next photo. Bottom photo shows Winkie at the annual "Shop for Tots" event. 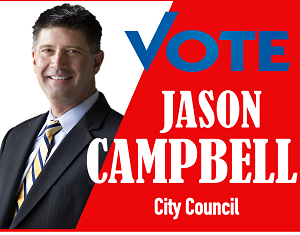