From the Bench: The Greatest Play (and Victory) That Never Was in Bridgeport High School Football History

It’s been more than a decade since it happened, yet Bridgeport High School alum Jeremy Gum can’t shake the memory of what could have been. Despite all of the yards rushing, all the passes intercepted and caught, all of the tackles and highlights during what turned out to be 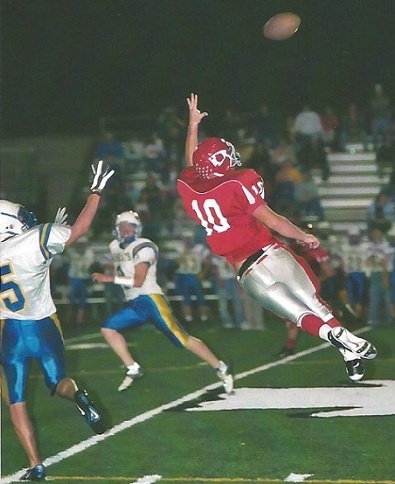 a Class AAA all-state career with the BHS Indians football team, Gum has one particular moment he can’t just can’t seem to shake.
Perhaps it’s not what didn’t happen that bothers Gum the most. What likely bothers Gum is what could have happened on a rather gloomy and less than pleasant October afternoon at Wayne Jamison Field.
What the history books will tell you is that during Gum’s junior year, BHS lost to Robert C. Byrd in a prep football game by a 27-23 score. What those close to the program will tell you is that it was another in a long line of extremely great games between the two schools. What Gum will tell you is what could have been.
“It was an afternoon game on a Saturday because of some issues involving damage to property when the two teams had played in basketball a year or so earlier,” said Gum. “It was raining and the field was just a mess. It was the very last season before the artificial surface went down.”
For Gum, it would be very easy to explain what happened that afternoon as a result of the weather. That’s not the case. And he’ll tell you such.
Before getting to what happened that lies on Gum’s mind more than a decade later, it’s best to set up what was taking place.
Three times in that outing, Bridgeport rallied from deficits. The last time came late in the game with Gum’s teammate Alex McElfresh blocked a Robert C. Byrd punt and Adam Schwenk pounced on the pigskin at the Eagles’ 18-yard line. Five plays later, and after 2:18 was 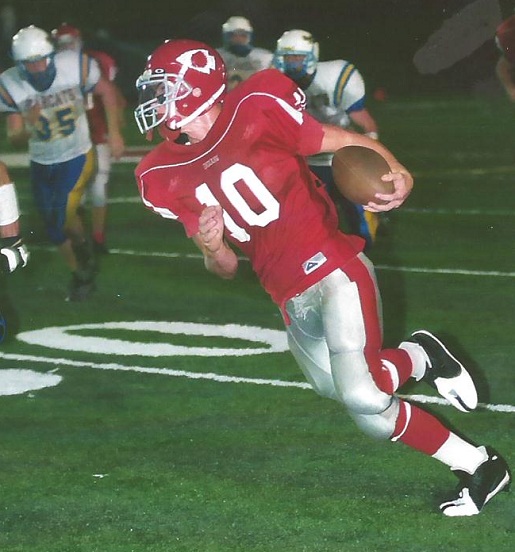 ate off of the fourth quarter clock, Bridgeport took a 21-20 lead – the Tribe’s final advantage. In fact, BHS would go up 23-20 when quarterback Adam Klenk connected with Patrick Echard for a two-point conversion.
With six minutes left to play, RCB would produce what would turn out to be the game-winning drive. A big kickoff return – part of special teams play issues that killed the Indians all day long – set up the scoring drive that included a devastating fourth-down conversion.
The fourth-down conversion was a 4th-and-seven play where RCB’s J.J. Mayer hit tight end Jonathan Griffin that proved to be a spectacular catch by Griffin (both players would end up being prominent players in the now defunct West Virginia Conference). If the catch wasn’t bad enough, the Eagles would score with a minute to play and eventually take a 27-23 lead.
There was dejection on the side of the Indians’ side of the field. Not only did the situation seem dire, but the Indians had watched a late first-half 49-yard touchdown bomb from Klenk to Jamin McCue get wiped off the scoreboard due to a hold. While Gum makes no excuses for what was about to come, he also said he has no problem about the holding call that would take the six points late in the first half off of the scoreboard and lead the score at 14-7 as opposed to being potentially tied at the break.
“They said there was a hold on Gino (Molinaro) on the play, but when we watched the film Gino completely pancaked the guy he was blocking,” said Gum. “It wasn’t close, but in the end, had I did what I hoped to do it wouldn’t have mattered.”
Despite the late score by RCB and despite the non-score by the Tribe in the first half, there was hope – but it was sinking. Once the 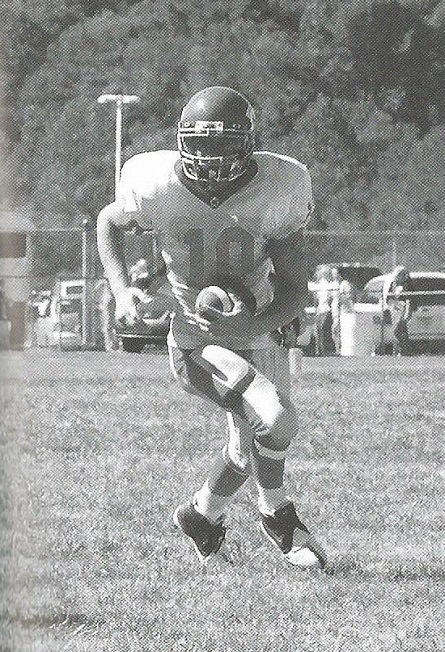 Indians were only able to get the kickoff to the 22-yard line, things looked bleak. Lacking timeouts and with the BHS offense built for a marathon as opposed to a sprint, it would take a miracle, particularly after a first down play went nowhere.
“I remember we ran a play that was normal for our offense hoping to break something loose, but it didn’t happen,” said Gum. “It was at that point that I knew it would take something special to happen for us to win.”
On second down, it nearly happened. Flanked out in the slot position, Gum and several others were instructed by then Coach Bruce Carey to run go patterns down the left sideline.
“We knew it was Hail Mary time,” said Gum.
The prayer would prove to be there. Gum couldn’t answer it.
Klenk launched a high spiral that floated toward midfield. Gum said it was a bit underthrown and he decided to back off of the play.
“I’ve talked to J.J. about it and he told me they were told to simply bat the ball down. J.J. was back there with Brandon McCollum and Matt Godfrey. They had some great players defending on the play,” said Gum. “They all went up to break it up with only Patrick (Echard) going up for us. I decided to play for the tip knowing the odds were just as good that it would happen as Patrick being able to come down with it among their defense.”
Incredibly, everything fell into place. Not only did the ball get tipped as the RCB defense broke it up, but it got tipped to Gum who had went from slowing down to hitting full stride. The ball, incredibly, came right to him.
“Truly, it couldn’t have happened any better. I couldn’t have drawn it up like that if I wanted to because I was in full stride, running full speed and it hit me around my hip. I didn’t even have to reach for it,” said Gum.
What turned out to be the potential spoiler was Mayer. Arguably one of the smartest players in years in the area had peeled off slightly to the group converging on Echard. He managed to catch Gum in his view.
“I actually saw J.J. backing off and getting ready to angle me; to cut me off,” said Gum. “Even if he gets me, I’ve got us down where 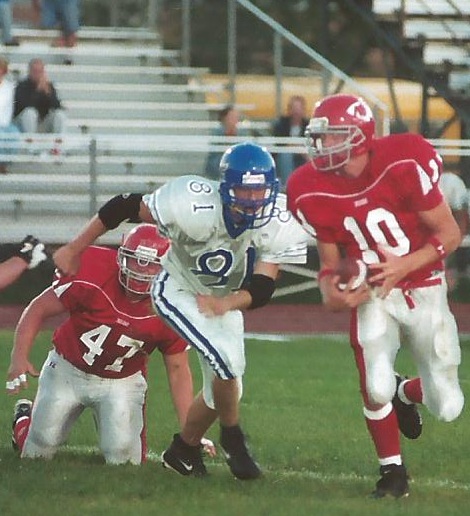 something can happen, but when I glanced at J.J. and then decided to just run and tuck it there was a problem. I didn’t have the ball.”
Instead, the ball was resting near midfield. Gum kept running. In fact, he went for about 15 yards before he fell down and beat the soon to be extinct natural grass at Jamison Field.
After that, nothing came close to finding the end zone. The Indians wouldn’t score and the game would belong to Robert C. Byrd.
For Gum, redemption would come in his senior year when another Saturday afternoon game – this time at RCB’s stadium – saw the Indians rally late and get a late fourth down conversion on their way to a 20-15. And Gum was more than just a casual spectator with 188 yards rushing and three touchdowns.
Despite ending his career with a win and huge numbers against the Indians’ biggest rivals, Gum still would like to have that one moment back. If for no other reason he said so many guys have given him a hard time about it.
“That’s probably the play that I think about the most, even more than the good plays that I was able to get during my playing days,” Gum said. “It was right there and I didn’t get. Because of that, for the next few years particularly, if I was playing softball and I’d drop the ball or if someone tossed me a television remote and I’d drop it, they’d ask me if I was back at the Byrd game. The worst was my teammate Adam Krohe. Although it rarely comes up anymore, Adam still reminds me about it.
“The thing is that would have been a finish that everyone would have remembered,” Gum continued. “Life goes on, but for some reason, I just can’t shake it.”
There’s a reason for it. It may be the greatest play that never was that could have produced the greatest that never happened. At the same time, BHS never would have been in position to be there that season and get the win the next year if not for Gum.
It’s the way the ball bounces. Unfortunately, this one bounced out of Gum’s hands.
Editor's Note: Third photo of Gum vs. Robert C. Byrd his senior year by Alice Rowe. All photos courtesy of BHS Journalism Department.