From the Bench: The Top 2019-20 Class AA Program? A Neck-and-Neck Battle with Indians, Polar Bears

By Jeff Toquinto on September 20, 2020 from Sports Blog

On Sept. 11, officials from the WVSSAC were on hand to present the Bridgeport High School administration the MVB Bank Champions Cup for having the top girls Class AA program. The girls had won the title all three years of the cup’s existence.
Winfield was second in the girls. Fairmont Senior came in third.
The Bridgeport boys, for the first time in the short history of the MVB Cup, did not win the cup. Instead, the Indians finished second to 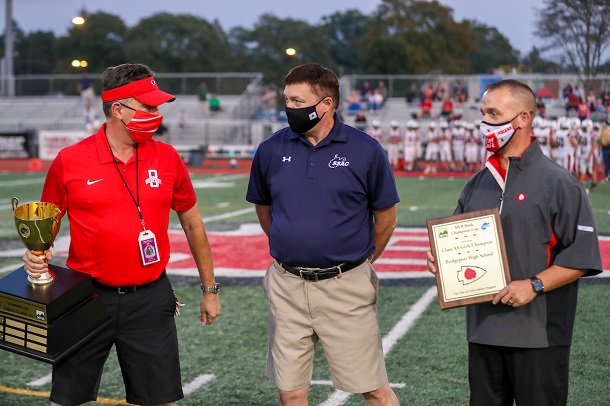 Fairmont Senior. Winfield would be third in the boys as the three school traded spots.
Perhaps before going further, it should be noted that the all-sports award sponsored by the WVSSAC is given to the top program in all three classifications in sports in West Virginia. The rankings are based on a point system that will reward the top eight finishers in each state championship.
According to the WVSSAC Web site, points are earned by finishing first (100), second (97), third (95), fourth (93), fifth (91), sixth (89), seventh (87) and eighth (85). It also has an academic component thrown in.
The Web site states this. Additional points are earned for the graduation rate of each school: 100%-97% (100 points), 96.99%-94% (97), 93.99%-91% (95), 90.99%-88% (93), 87.99%-85% (91), 84.99%-82% (89), 81.99%-79% (87) and 78.99%-76% (85).
For those wondering how a champion was determined in a year where COVID-19 actually cut short sports seasons – some at actual state tournaments – while eliminating the entire spring set of sports, they simply tabulated their wins on the ones that were completed.
The BHS girls were tops with consistency. They won only one state title – in cheerleading, but gathered points in volleyball, soccer, cross country, swimming, and basketball.
Bridgeport High School Assistant Principal and Athletic Director Mark Jones was pleased with the honor for the girls.
“It’s always good when the student athletes get recognized for their achievements on the athletic field, and this has an academic 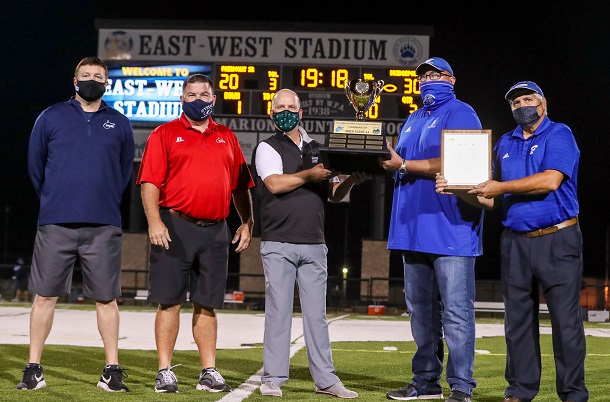 component that also recognizes their work in the classroom,” said Jones. “This is a good representation of our students and our community.”
Jones, a former coach with a competitive edge, would have like to have seen a third straight boys cup. However, he was not disappointed.
“It shows the consistency with the programs, but what the community does to help instill in our student-athletes a desire to succeed,” said Jones. “The boys still made a positive showing in a season cut short by COVID-19 where there were some spring sports they looked to be strong in. At the same time, Fairmont Senior may have had some strong teams going into spring too.”
The MVB Cup does not determine an overall champion based on total points between the girls and boys. If they did, Bridgeport would have finished first with 1,079 points. Fairmont Senior’s combined total was 975, while Winfield finished with 870.
So, does that make Bridgeport the top program in the state for 2019-20? What I threw out is an actual number, but I am certain there are those who might find fault with me using numbers – myself included. That said, I did find something I missed for the first time since we started Connect-Bridgeport.
What I missed back in June was the Gazette-Mail Excellence in Sports Award (GMEISA). It is basically the same as the MVB Cup with a slightly different point system and is based solely on where teams finish the year in various state tournaments.
The reason I missed it is two-fold. I figured, incorrectly, the GMEISA, would not take place due to COVID-19. I figured wrong. And those who usually let me know about it each year, did not. Not an assignment of blame, but assuming those folks figured the same as I did.
The GMEISA, which goes to the top overall program without a designation for boys and girls, came out in June. For those struggling with 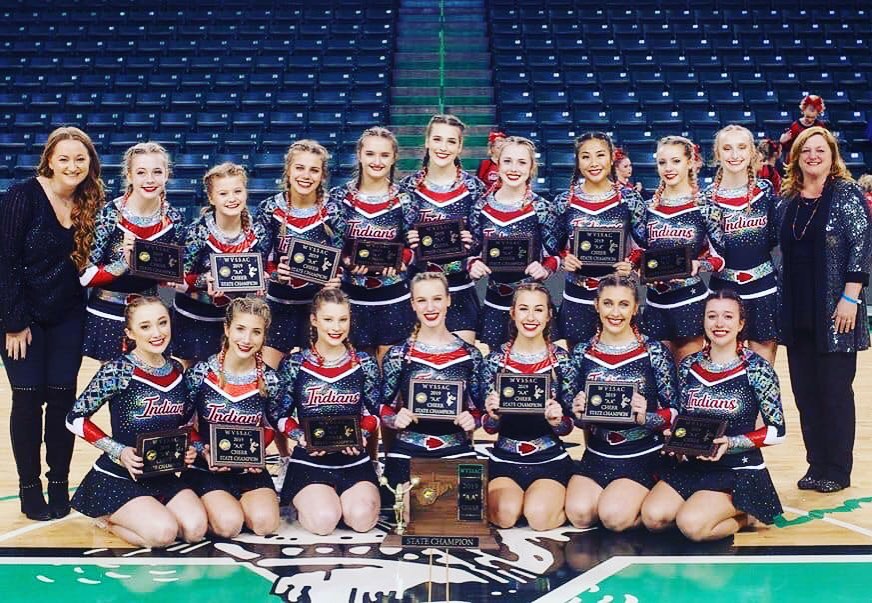 math, that was three months ago.
They use a point system as well. There system has points awarded to the top eight finishers in statewide competitions in the 19 sports sanctioned by the WVSSAC. A stat title is worth eight GMEISA points, with seven points for the runner-up, six for third, five for fourth, and then down to one point for an eighth-place finish. In bracketed tournament, like football, points are split when teams on opposite sides of the bracket are eliminated in the same round – thus how you see Bridgeport’s total below.
If you want to use them as the judge and jury with their near quarter century of honors, their verdict is in. And they rank the top Class AA program in the state for the last school year as Bridgeport High School.
Incredibly, it was the eight straight time Bridgeport won the Class AA GMEISA honor. The only school to win more consecutive awards was Charleston Catholic in Class A. Bridgeport has won the honor 12 times in 24 years the GMEISA has been in existence.
So how did Bridgeport do it? Along with the already mentioned girls top eight placings, the boys saw a state title in football, a runner-up finish in cross county and swimming, and it placed in the state tournament in wrestling.
In the GMEISA, Bridgeport’s combined points between boys and girls was 53.5. That total edged Fairmont Senior, who had a dominant fall campaign (state titles in boys’ soccer, golf, and a sweep of cross country) with 51 points.
Unlike the MVB Cup, the GMEISA considered the boys and girls state basketball tournaments before a conclusion was reached for the girls and before the boys could even get started. In the article, which is linked at the end and goes into a lot of detail on this year’s scoring, they say feel free to put an asterisk on this year’s championships but added that Bridgeport had “earned the right to be called GMEISA champs.”
So how did the staff at the Gazette-Mail give points to the girls’ tournament that ended March 12 with first-round play still taking place?
For basketball with the girls in the state tournament, the ‘AA’ quarterfinal losers – Bridgeport and Fairmont Senior – were all awarded 2.5 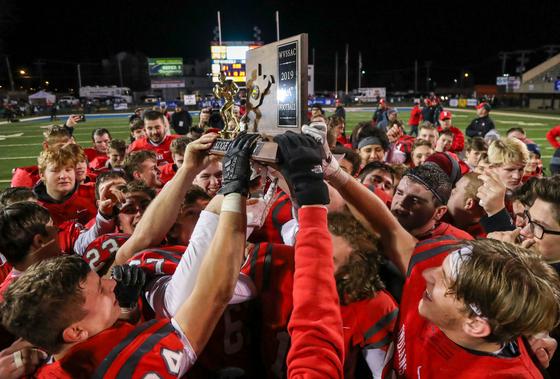 points. The teams advancing out of the quarterfinals were all given 5.5 points. If you are interested in how Class A and AAA were scored, read the article below.
As for the boys, points were awarded for the Class AAA and Class A teams that made it to the state tournament by winning their regional championship games. For those that remember, the day COVID-19 put a halt to everything, the Class AA regional championship games were set to be played – including Bridgeport on the road at Lewis County.
None of those games took place. Because of that, Class AA boys basketball did not have any points awarded. It is there where the scoring ended.
Who knows what would have happened had the games marched on? At this point, it is only speculation and certainly not my call. The folks running the GMEISA makes what they say is “our call” and give the nod to the Indians in Class AA.
If you want to use that, use it. At the same time, it is probably wise to stop and think at just how dominant Bridgeport and Fairmont Senior have been in sports for the last several years. It speaks well of the schools, the communities, and athletics here in North Central West Virginia.
I sure hope there will be more than enough sports this year that the possibility of an asterisk existing is eliminated. And for those who think Bridgeport’s move to Class AAA means no chance to compete, consider this from the Gazette-Mail’s story on the GMEISA, particularly for those who have told me and others “Bridgeport isn’t even competitive when they’ve been in Class AAA.”
In 10 of the 24 years of GMEISA (1996-97, 2004-05, and 2011-12) the article says the finished in the top 10 almost every year in Class AAA. In their most recent year of AAA competition on 2011-12, the Indians finished third.
Not too shabby.
Hats off to the Bridgeport High athletic program for another solid year. And kudos to Fairmont Senior and Winfield as well. If you want to debate who is top this year go ahead. If you want to debate where the best programs are in the state, there is a little less to debate.
Editor's Note: Top photo shows the BHS Principal Matt DeMotto, left, and Assistant Principal and Athletic Director Mark Jones, right, receiving the MVB Cup for girls sports for 2019-20 prior to the BHS football game with Liberty. Second photo shows Fairmont Senior officials receiving the boys MVB Cup for boys sports last year from WVSSAC  officials. The next two photos are of the Indians' 2019-20 state champions, the cheerleading squad and football team, respectively. Photos by Ben Queen Photography.