By Jeff Toquinto on September 01, 2019 from Sports Blog

To the novice football fan, it may not be noticed. After all, players today at just about every level have something as part of their gear that isn’t mandatory.
As for arm protection, typically players wear sleeves. Often, particularly at the higher levels, they’re decorative and sport team colors or unique designs.
Many times, those extra pieces of gear are for show. And plenty of times it’s simply a player screaming out for attention and to draw a little bit of limelight on themselves. 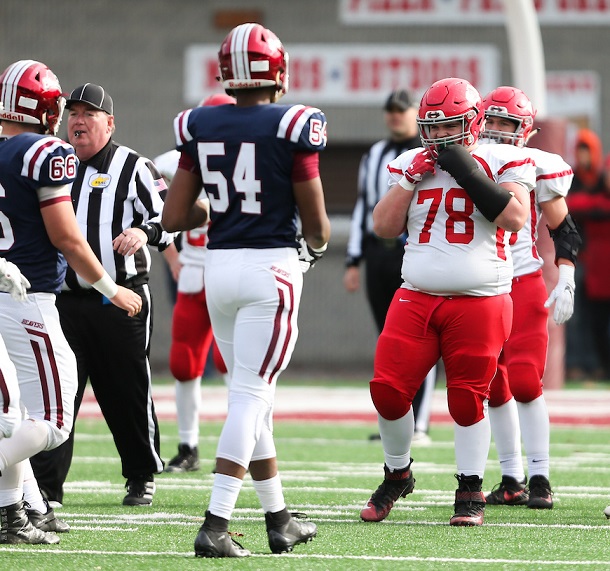 Then, there’s Bridgeport High School senior Michael Watkins. A large part of his left arm was wrapped up every game during his junior year with a cover as well.  This one, which stretches from his elbow over his hand, is not for show. It’s not for attention. It’s not something begging for the limelight.
Upon first glance, if you had to describe it, the word would be outdated.
“I honestly didn’t pay much attention to it. I guess it’s a forearm pad or an arm pad that they just don’t’ wear anymore. You’re talking back in my era you might see them and that was a while ago,” said Bridgeport Coach John Cole. “Michael never mentioned it and one day I saw it and asked him about the pad. I wanted to know where he got it and why he was wearing it. That’s when he told me.”
There’s a story here with Michael Watkins. It’s a story filled with tragedy. It’s one filled with perseverance and family love. And it’s one that will continue to be written well after this blog makes its appearance.
The arm pad belonged to Watkins’ father, Michael Garrett Watkins. Like his son that plays today – officially Michael Garrett Watkins II – the father played football for the Indians. He last played in 1994 and graduated in 1995 from BHS. 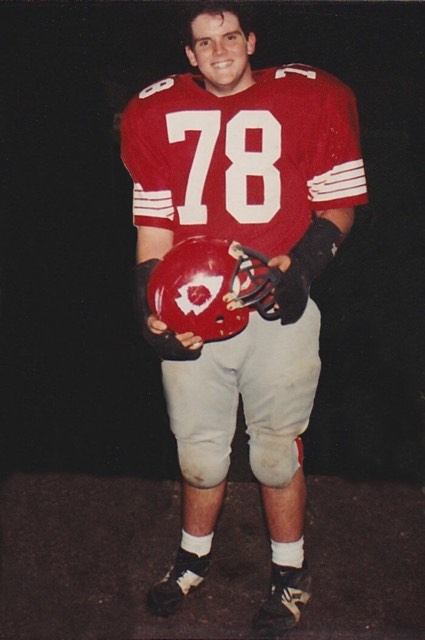 He and his wife Tammy Jo were the proud parents not only of Michael II, but of older sister Kelsey. While mom talks about the bond the father had with the family, she also is very much aware of the bond that father and son had – including a special bond formed over football.
“They did stuff together for football,” said Tammy Jo. “He would show him things and Michael developed a love for the game and he sought, like a lot of kids, his father’s approval after he finally started playing in sixth grade at Bridgeport Middle School and was the only sixth grader to play.”
Michael Watkins got to watch his son play that initial year. He got to watch him play in year two when young Michael was in seventh grade. Certainly, the hope for all was that he’d be watching his son on Friday nights in the future when young Michael would play on the same field dad had played on a few decades earlier.
Everything, sadly, would change on Nov. 17, 2014.
“We were doing our daily walk,” Tammy Jo said. “It was cold and raining a little bit, but we were trying to get into better shape. We got close to home when he told me he felt like he was going to pass out and asked me to not let him fall. I grabbed him and I fell with him.”
Young Michael, all of 12 years of age, saw them fall, Tammy Jo said. The next few minutes would see changes that no one in the Watkins family could forecast. As Tammy Jo realized something was horribly wrong, she began to perform CPR. She had her daughter who was also near call 911 and call a family member who was a doctor.
The worst wasn’t just possibly happening with the entire family there, it had happened. Michael Garrett Watkins, just 37 years of age, had passed away.
“They found out he had an enlarged heart. He could have passed away at anytime and were surprised he had lived to be 37,” said Tammy Jo.
As happens too often, a young family’s life was turned upside down. Young Michael, however, still found some solace in football. He played for BMS in eighth grade and then was on the freshman team at the high school in ninth grade before everything that he dealt with that day and everything he emotionally had dealt with since, came to a head. 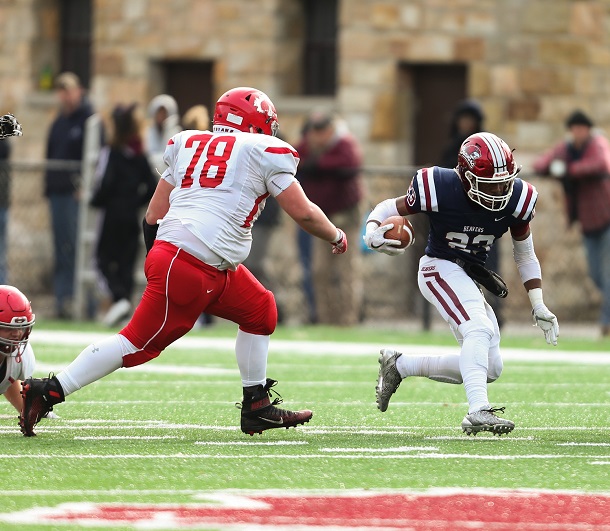 “I decided to sit out my sophomore season and what I was going through, everything I was thinking about, was the main reason. It was stressing me out at school that year too,” said Michael. “For whatever reason, it was my sophomore year when everything just hit me hard.”
While Michael admits it’s still hard to this day, he realized something about the game he and his father had worked on years before. It not only was an escape, but it was a reminder of his father. Not just a reminder, but a pleasant one.
“I missed it,” said Watkins. “I really regretted not playing.”
That would change last year. When fall practice began, Michael Watkins was on the field. Outside of the youngster and his family, no one was happier than Cole.
“You better believe I was happy he came out. I was pretty sure the reason he didn’t come out as a sophomore was because of his father,” said Cole. “When he came out, he lifted and worked out pretty hard. The only thing was missing that year slowed him down from reaching his full potential, but you could see him getting better and better and understanding the nuances of playing both ways. 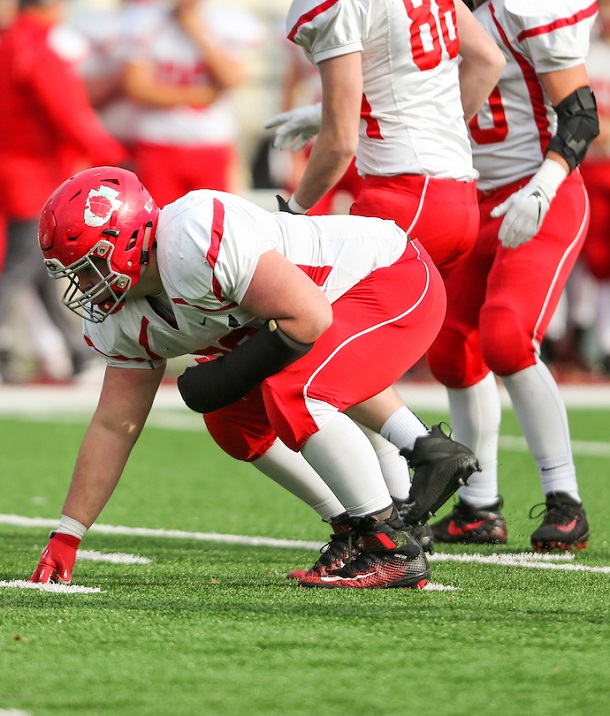 “I was interesting to see his growth as a player on film and from the sideline,” Cole continued. “You could see this big strong body out there that just had to grow up into a football player. That’s exactly what happened.”
Cole said there were times Watkins found out the hard way on how to get better. Those experiences decreased as the year went on.
“You saw that less and less on film,” said Cole.
What you would consistently see was the pad. Every game, every play, every moment on the field Michael Watkins wore his father’s pad with the number 78 on it. How he got it, however, is a story within a story.
“Mike gave that to his brother Greg Watkins, and I believe he wore it in the early 2000s when they won the state title,” said Tammy Jo. “When Mike and I dated, Greg was Mike’s shadow to the point we were the three Musketeers. Greg wanted to be like Mike, and he gave him that sleeve, or pad and it was important to Greg.”
Flash forward more than a decade, and most would believe the old black pad from the mid-1990s would be in a landfill. It wasn’t. Greg Watkins had kept it, Tammy Jo said. As it turned out, keeping that piece of his brother was going to prove beneficial to another person

who looked up to Michael Garrett Watkins.
“Greg knew Michael was having a hard time with football,” said Tammy Jo. “One day, Greg went to Michael and told him ‘this was your dad’s. He gave it me and I’m giving it to you because it should be yours.’ Immediately, there was a light that shined in Michael’s eyes. You could see it meant something to him.”
Indeed, it did.
“That was important to me. To have it is comforting. The funny thing is that for all the years it’s been around and all the use, it’s in good shape,” said Michael. “There are some scratches and a few pulls on it, but it’s nothing a piece of duct tape can’t fix.”
Amazingly, the pad that many believe is covering up a serious injury (Parkersburg South players asked him that during the team’s final scrimmage this preseason and it’s happened plenty of times before) helped in some ways to fix young Michael. It helped a bit to keep playing and it’s the reminder he needs when he’s on the field.
“It really provides motivation for me and it’s a key reason I want to go as hard as I can for as long as I can,” he said. “I’ll get tired and look down and see that pad and I just try to sweep the thought of being tired aside and just play. It makes me realize I don’t want to let my dad down because I truly believe he’s watching me. On top of that, I don’t want to let my family, my teammates of my coaches down.”
Cole doesn’t think that’s going to happen. He’s pleased with Watkins’ effort this year and knows he’ll have to be pivotal once again on the offensive and defensive lines for the Indians to get to where they want to be. And the coach knows Watkins going all out wasn’t necessarily a given with his situation.
“When you lose a father at that age you sometime lose that direction. Michael found his way back and he’s making the most of it. I’m sure a lot of it has to do with that pad on his arm and a lot of it has to do with a dedication to everyone out there, including himself. He’s a testament to perseverance,” said Cole. “I imagine, though, it’s still tough for him. How could it not be?” 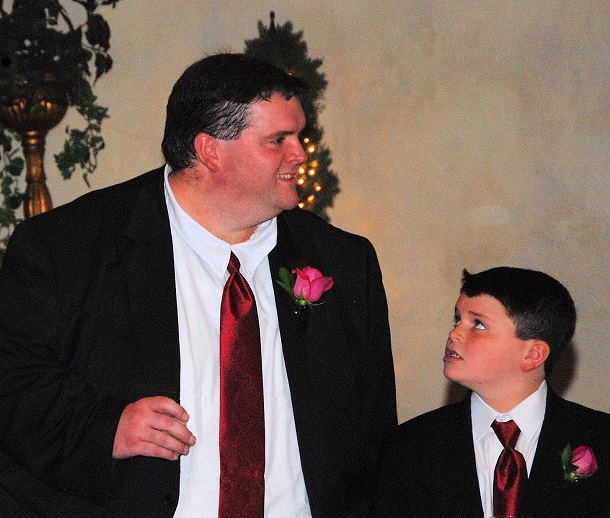 Football, again, has been the saving grace. It’s done things perhaps things like therapy couldn’t.
“I totally understand the closure isn’t there yet. I understand he’s still dealing with anger. Football has helped with all of that because he can vent his anger and he can stay connected to his father,” Tammy Jo said. “It’s all important, especially that pad.”
Watkins would like to see the pad make an appearance at Wheeling Island Stadium. He’d like to take it back to where his uncle once had it and come closer to the closure he seeks after having to see something no 12-year-old should ever have to see.
“That was the worst moment of my life, but it also opened my eyes up to the world,” said Watkins. “I’m trying to be the best football player I can be and the best person I can be because you never know at any given time what can happen.”
Editor's Note: Top photo shows Michael Watkins II with his father's armpad that his dad is shown wearing in the second photo. In the third photo, young Michael moves in for a tackle against Bluefield and he's shown lining up on defense in the third photo. In the fourth picture, Michael Watkins is shown with his daughter Kelsey and young Michael at a family event, while young Michael is shown looking up to his dad literally and figuratively. Family photos and photo of Michael Watkins from the 1990s at BHS courtesy of Tammy Jo Watkins. Other photos are by www.benqueenphotography.com.