The end of the 2019 college football season will officially end tomorrow – Jan. 13, 2020 – in New Orleans. The end of Bridgeport High School alum Elijah Drummond’s football career came back on Nov. 29 in Fort Worth, Texas.
Monday, Clemson will battle LSU in the national championship contest. Back in November, WVU was closing off a non-bowl season with a 20-17 road victory against Texas Christian University.
A little more than a week before that, the red-shirt junior played his final game in Morgantown in what turned into a setback to nationally ranked Oklahoma State. The final of 20-13 probably wasn’t how Drummond wanted to end his career on his home turf even if the win in 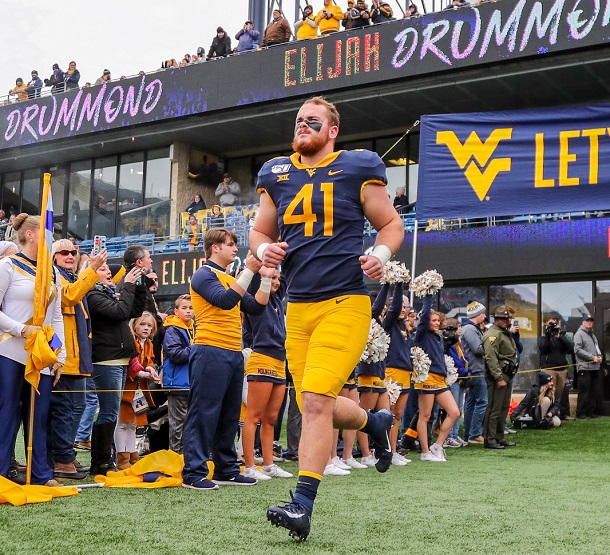 the final game likely was.
Of course, those astute fans probably noted that Drummond is a red-shirt junior and still has eligibility left like his BHS 2016 alum teammates and roommates Dylan Tonkery and Dante Bonamico. And that will lead to the question of why is he hanging it up?
Injury? Illness? Fallout or not happy with new Coach Neal Brown and staff?
The answer to all of those is a resounding no. Drummond is happy. He’s also set to graduate in May with a degree in Exercise Physiology and plans on applying to PA school this spring – most likely at WVU (although he has a few other applications out elsewhere just in case).
On top of that, he’s set to be engaged to his middle school sweetheart with plans for a 2021 wedding. The plate, as one can see, is full for Drummond. The future is taking priority over football.
“The deciding factor, knowing I’m not playing in the NFL, is that my career plan is medicine,” said Drummond, a preferred walk-on who managed to earn two semesters on scholarship. “I’m going to be getting married to (fellow 2016 BHS graduate) Hanna Stolzenfels who 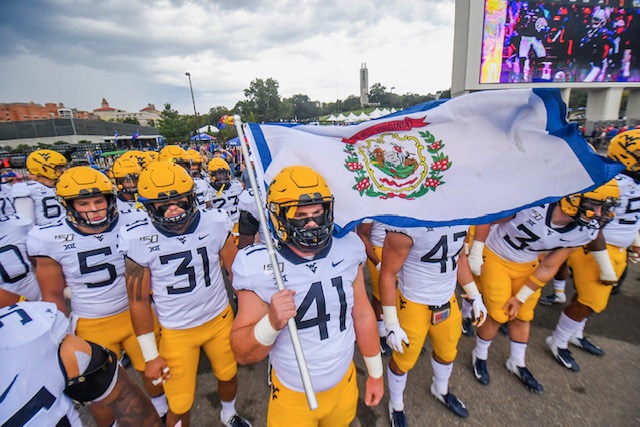 just graduated with a nursing degree.
“We both talked, and I knew it was time,” he continued.  “It helped a lot that she was supporting my decision, particularly knowing how much she loved to come to games and watch me play.”
Drummond played a lot this year, primarily on special teams where he saw action in all 12 contests. The player who earned the nickname “Do Right” for doing everything right in practice, was the right end on kickoff returns, while seeing occasional duty on punt return units as well.
Now, however, it’s officially over.
“It was an awesome experience, particularly growing up so close to the school and going to games even before I could walk,” said Drummond. “To put that jersey on and wear it out on the field is something you can’t describe.”
What Drummond could describe is the transition from a three-time state champion at Bridgeport High School to playing Division I football in the Big 12 Conference. He said the jump, despite having what many believed to be a football-ready body, was difficult. 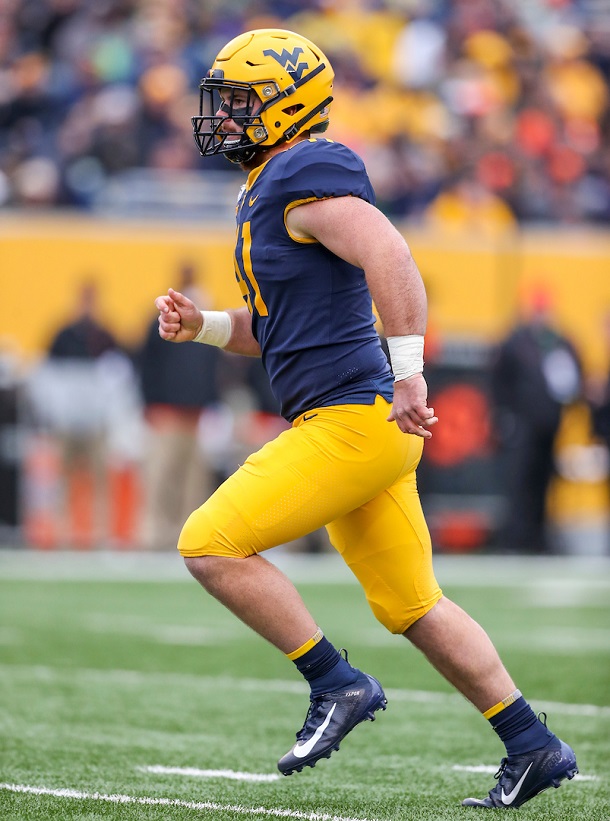 “The mental jump is huge from high school to college. You’re studying hours of film and you’re having to mentally adjust to a strength staff that does a tremendous job,” said Drummond. “I was big, but I wasn’t strong when I got here, and they completely changed my body and its composition.”
Indeed, they did. Drummond arrived in Morgantown at 215 pounds and eventually made it up to 250 before settling in at 235.
“When I had all that added weight, I was actually leaner,” said Drummond. “I might have a hard time keeping as lean.”
He’ll also have a hard time walking away. Once Drummond made up his mind, he told his position coach that with what will likely be a demanding schedule requiring clinical experience and a bevy of classes to get ready for PA school, the demands of football weren’t feasible. As expected, word got to Brown.
“He just told me good luck. The night before that final home game he asked if I was sure about my decision. You could see he was serious,” said Drummond. “When I told him I was sure, he let me know if I needed anything to talk to him.”
Drummond said he loved his year under Brown. He said no one was sure what to expect because of such turnover from the previous year 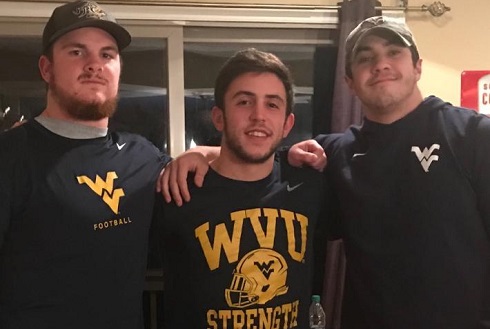 under former Coach Dana Holgorsen.
“It was a huge change because every coach, with the exception of strength staff, was gone so there was an adjustment period,” said Drummond. “He and Coach Holgorsen were complete opposites in everything they did. The staff today is a players’ staff. Coach Brown will walk past you and ask about your family and ask about how you’re doing and it’s not just small talk.  He’s trying to get to know about you and the players recognize that.”
For Drummond, he recognized that coming out for senior day was going to be difficult. He said he knew it before the day even arrived and he knew it even more when they called his name.
“That was a tough day; even the man trip. I knew I would be okay, but then I knew when I got out to see my mom (Cynthia) that it would be rough. As I expected, she was pretty tore up so I just told her it was okay,” said Drummond. “Dad (Kevin) is not too emotional so he was alright, but it was a great experience to be on the field with both of them.” 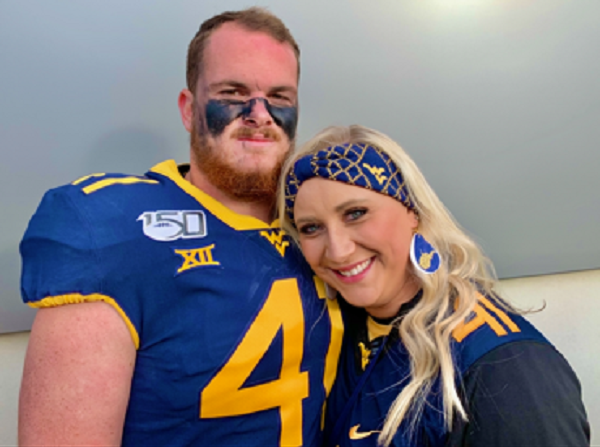 Now, things change a little bit. He’ll still be at the games, but as a spectator. And he’ll still be pulling for the Mountaineers and his roommates – just from the stands and not the sidelines.
“I’ll definitely be there to support the friends that I’ve made including Dante, Dylan and (younger brother and fellow Mountaineer) Noah,” said Drummond. “I’m still going to be living with them.”
That’s where things will remain the same. The four will continue to stay in a “pretty fun and chaotic” apartment setting where Mario Kart is played, and competitive levels rise.
“I’ve broken a few remotes and Noah has too. The funny thing is everyone knows how intense Dante is, but he won’t slam a remote. I guess I got a little bit of my mom’s temper,” Drummond said with a laugh.
The Bridgeport group may be his long-time friends, but they’re not his only ones. In fact, Drummond said the friendships are the best part of everything.
“I can’t tell you how many friendships, many unexpected, I’ve built along the way that I don’t see ending. (Fairmont Senior alum) Jake Abbott, who I hated in high school, is one of my best friends on the team,” said Drummond. “There are too many friends to count because of this experience.”
It’s an experience he, again, said can’t be put into words. However, he was quick on words about one thing
“I would definitely do it again,” said Drummond. “It was all worth it.”
Editor's Note: Top three photos are by Ben Queen of www.benqueenphotography.com, while the fourth photo showing Eli Drummond, far left, with Dante Bonamico, center, and Dylan Tonkery is courtesy of Drummond. Bottom photo is of Drummond and Hanna Stolzenfels, also provided by Drummond..