The Young Progressive Women's Association presented their annual Spring Mother Daughter Tea on Saturday, June 26 at noon at the Uptown Event Center.
The YWPA is a part of the PWA with its director Betty Felts. The young ladies sponsor many community projects throughout the year such as Christmas stockings for the veterans, and the outdoor food pantry for the homeless. 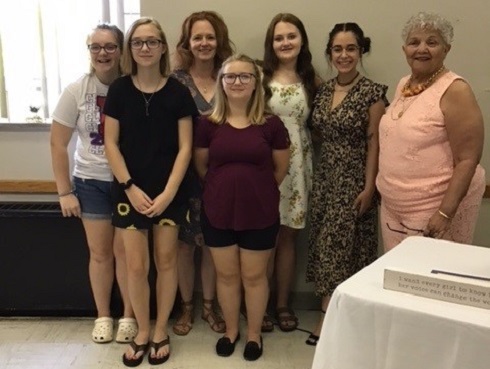 Preparations for the tea were made by the members and their director. Centerpieces were tiers made by the girls when they were Scout members. The decorations included beautiful China teacups used for the tea. Members of the PWA also attended the tea.
A special ceremony was held for Tamira Singleton who is a senior graduating from Robert C. Byrd. At this point the girls move from the YWPA to the PWA.
As PWA President, I presented Tamira with a lifetime membership to the PWA. During her college years she will serve as a liaison for the YWPA. She was a founding member of the YPWA, a member of the National Honor Society, President of SADD, Secretary of Student Council, a member of the Thespians, Band and Show Choir. She was also prom queen and will be attending Fairmont State University this fall.
Sophia Brager is also a senior but was unable to attend the ceremony.
The group will be planning a Mad Hatters Tea in the near future. For information about the YWPA contact the Progressive Women’s Association.
Editor's Note: Shown in the photo are, front row from left, YWPA members Alexis Marsh and Danielle Marsh. Back row, from left, Alyssa McElwee, Betty Felts, Gabby Nixon, Honoree Tamira Singleton, and PWA President Rosalyn Queen.