By Rosalyn Queen Alonso on September 05, 2019 from The Grapevine

Labor Day has come and gone and with that comes the beginning of September.
This also means the West Virginia Italian Heritage Festival has recorded its 41st Festival in the books.  There are many wonderful things that happen at the Festival but this year an extra special meaning for me was the appearance of my granddaughter, Miranda Lang, Regina Marie 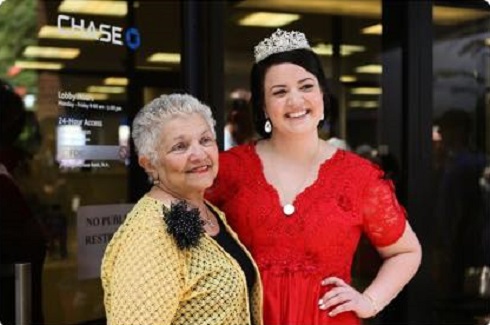 40th.  Her natural beauty shone as she came forward in the traditional green gown of the retiring Regina.  Her gown was designed and made especially for her by a West Virginia gown maker.  The gown was designed with the traditional pockets that Miranda has made famous in her designs.  Her closing remarks were made highlighting her pride in her heritage and the impact this honor has made on her.  Miranda lives in Washington, DC, where she is employed by her alma mater, American University.
September means that fall is just around the corner and the leaves will soon be turning as we adjust to the cool evenings.  Tailgating and football will be the highlight of everyone’s weekend.  Last minute vacations will be planned and, believe it or not, our thoughts and planning will be geared towards Thanksgiving and Christmas.  I want to suggest to you to plan a cruise, but right now with the hurricane season upon us we might want to wait a little later.
It seems that produce is pretty plentiful this season and I hope that you will take advantage of it by preserving as much as you can.  The most popular item in our area is canning peppers and tomatoes.  I am not very happy with peppers preserved in the freezer but I do like tomatoes in the freezer.  A gallon bag of tomatoes is great for adding to soups this winter.  Don’t forget that we will need peppers when we get our first batch of mushrooms to preserve.  Whether you can them or put them in the crock you will still need peppers.
Green tomatoes in the crock will spice up any dish of pasta.  Just take them out, rinse them well and add them to a skillet of hot olive oil that garlic has been added to. Usually there are enough at the end of the season to use with the mushrooms.  Don’t forget that green tomatoes are great put in the crock with peppers.  They will compliment any dish of minestra this winter.
I have not tried any way to preserve zucchini but I have grated them and put one cup in a baggie to use for zucchini bread in the winter.  I know that many of you are very adamant about preserving food for the winter.  This is especially those of us that are a little older but it seems the younger generation does not participate in this custom.  I do not have the answer if it saves money or not but I do feel that there is nothing  better than a jar of canned peppers with hot bread in the winter.
You know what retirement meant to me this past week?  A three hour lunch with Patty Martino and a three hour breakfast with Rosemary Seamon Yurko.  This is the result on having long established, meaningful and special friendships.  Remember, we reap what we sow.  Sowing friendships are more important than sowing peppers and tomatoes -- because it's always better to enjoy peppers and tomatoes with old friends.
Keep in touch, watch out for the kids returning to school, and until next week “Now You Have Heard It Through The Grapevine.”
Editor's Note: Rosalyn Queen, left, is shown with her granddaughter Miranda Lang at last year's Italian Heritage Festival as Miranda served as Queen Regina Marie 40. Photo courtesy of Michael Queen.