Writer, actress, and storyteller Candice Guardino is quickly making a name for herself in the entertainment industry with her creative brand of 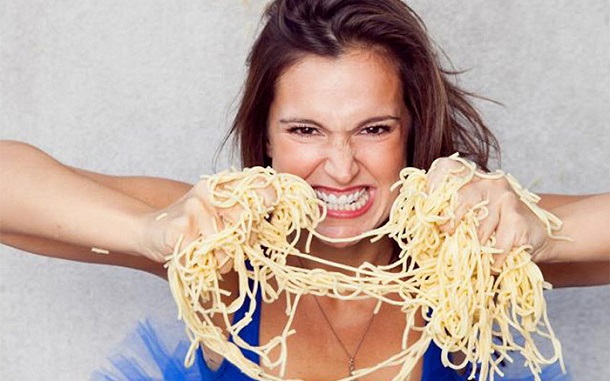 comedy and family humor that’s captivating audiences through impersonating multi-dimensional characters she has created like the ones found in Italian Bred.

“If a hilarious one-woman off-Broadway show about growing up Italian was going to play any city in West Virginia, it absolutely has to be Clarksburg,” said Jason A Young, the Robinson Grand’s consulting program manager. “In fact, we reached out to the West Virginia Italian Heritage Festival to get them on board with the show as a run-up to this summer’s festival.”

Guardino just wrapped sold out shows in New York, New Jersey, Los Angeles, and Chicago for her one-woman theatrical comedy Italian Bred, where it received rave reviews! Written by and starring Guardino, Italian Bred is based on true-life events and told through the eyes of a little girl growing up on Staten Island. Having written down everything her outspoken grandmother ever uttered, Candice slips in and out of multiple characters while sharing the stage with virtual cameos of Emmy winner Leslie Jordan (Will and Grace), Mario Cantone (Sex & the City), Steve Schirripa (The Sopranos), and Vic Dibitetto (Mall Cop 2).

According to StageBuddy.com, “Guardino single-handedly proves you can make a one woman show funnier and smarter than almost anything on TV. The endlessly talented performer plays every member of her family, as well as various supporting characters, who help populate her memories growing up.”

Guardino was born in Brooklyn, NY, and raised in an Italian family that always spoke at full volume. She grew up singing, dancing, and performing weekly recitals for her family in their living room. Guardino dedicates each performance of Italian Bred to her late grandma: Fran Guardin.

“We really can’t wait for Candice Guardino to visit Clarksburg and realize what an oasis of Italian culture we have in our great city,” said Young. “Who knows, she may decide to bring her family to the Italian Festival one day.”

The Robinson Grand Performing Arts Center is one of West Virginia's premier performance venues. A recent $15 million renovation has transformed our beautiful historic local theater into one the state's most spectacular small theater destinations in which to experience an event. Preserving the distinct historical charm of the 1913 theater, the Robinson Grand boasts the most modern updates and conveniences of any local performance venue. The comfortable 1,000-seat size of the theater makes every seat feel intimately connected with the onstage performance.