The numbers look bad and, in comparison to months in past years, they are. In comparison to the most recent month, the numbers are promise that a rebound is on the way.
During Wednesday’s meeting of the Benedum Airport Authority, Director Rick Rock told members of the governing body of the North Central West Virginia Airport that April may have been the worst month of flight service he can recall.
“We had 41 enplanements in April,” said Rock, as the Allegiant flight to Orlando was not operating and almost no one was using the daily 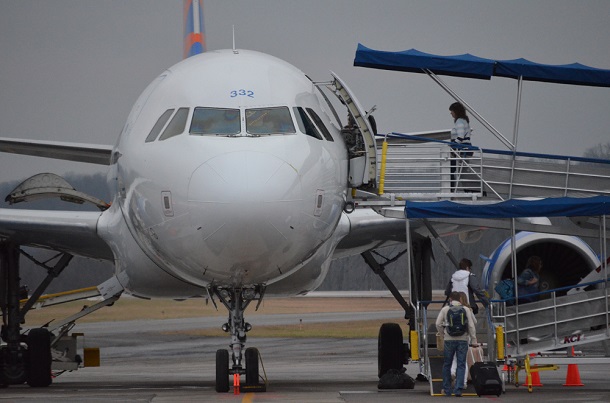 United Express flights due to COVID-19. “That was the lowest number I can recall.”
The numbers through May 20 are not like any from recent years, but it is already dwarfing April’s numbers. Rock said that as of Wednesday the airport had 191 passengers.
Part of the reason for the jump stems from the resumption of the Allegiant Orlando flight. The first of those was on May 14 with a second one on Sunday, May 17. The first flight had 22 passengers, while the Sunday flight had 29 passengers.
“We’re optimistic that we can salvage the rest of the year,” said Rock.
If the Orlando flights gain numbers, things will pick up again in June. As reported earlier on Connect-Bridgeport, flights to Myrtle Beach were expected to resume with the first flight June 5. However, Rock said that they were starting on that date. Individuals can book flights on the flyckb.com Web site.
Rock said his staff set up the terminal for those flights, as well as the United flights, for proper social distancing. Rock did say Allegiant was limiting their seating.
According to Deputy Airport Director Shawn Long, there is no middle seating allowed. Restrictions, he said, also allow for only the seating of family members in the same row.
“You will not be seating next to a random person,” said Long.
In a May 17 article on Connect-Bridgeport regarding the flights, Rock said passengers will be provided a gift bag upon entering the aircraft. The bags will contain a mask, gloves, and sanitizer wipes. Rock is also encouraging people entering the terminal to wear masks.