As anchor stores and other retail establishments have closed up shop in recent years, the owners of shopping plazas nationwide have looked to change their models in order to survive.
An official with the Cafaro Company, the owners of the Meadowbrook Mall, has continually said to expect new offerings that vary from the past to be in the mall’s future. Apparently, that statement wasn’t lip service. 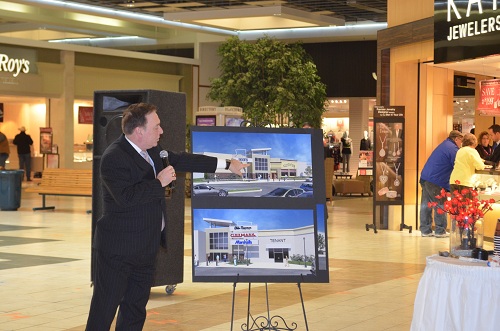 Earlier this week Joe Bell, the director of corporate communications for the Meadowbrook Mall, announced the mall’s next business will fit that niche. Bell said later this year “Planet X” will be on its way to the Bridgeport retail hub.
“It’s a laser tag and virtual reality business,” said Bell. “This is going to be a fantastic addition for those who enjoy those type of things on the gaming front in a local setting and it’s going to be a nice addition for anyone not into it that are looking to try something new.”
Planet X will occupy roughly 5,700 square feet at the mall. It will be situated next to Showtime Music and across from FYE.
“It’s definitely coming. The lease has been signed,” said Bell. “It should be open by late summer.”
Bell said he believes this will be the only type of business of its nature offering recreational opportunities such as laser tag in the immediate area. Valley Worlds of Fun, in Fairmont, did offer laser tag, but it closed early in 2018 after nearly 50 years of business.
“This falls in line with concept of adding more entertain options to our facilities,” said Bell. “There are a lot of different concepts out there that are attractive to many different individuals. We know, for sure, the virtual reality gaming, such as laser tag, is very popular and we see it working out extremely well at the Meadowbrook Mall.”
Editor's Note: Shown above is Cafaro Company's Joe Bell prior to a recent multi-million renovation project at the Meadowbrook Mall.