By D. Keith Bartlett on October 25, 2014 from Weekend Angler

It’s been a hot, beautiful summer across much of the south. Temperatures ran above average with rainfall well below; ideal weather for 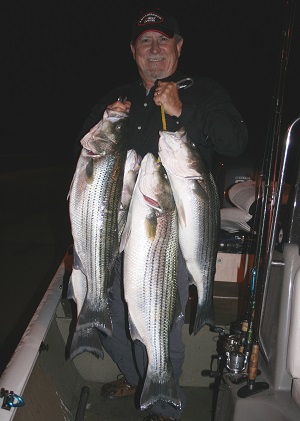 most outdoor activities. Limited rain early in the season baked my lawn, reduced mowing time and provided more free time for fishing but that’s where the good news ended. 2014 was one of the toughest years for summer fishing I can remember. Lack of rain held dam generation rates down and free-flowing rivers became crystal clear and shallow, encouraging dense aquatic weed growth. Both provided good conditions for anglers who wade and fish for trout, smallmouth bass and others, but created impassable conditions in most places for those with jet-drive outboards. Several trips to check various sections of my favorite smallmouth river produced disappointing results. When we caught respectable numbers of fish the average size was below normal, partly because we were limited on where we could fish. The river sections that normally produce our largest smallmouth bass of the season were inaccessible this year by jet-drive because of reduced flow and heavy weed growth. Even my favorite section of big carp water was so filled with weeds it was unfishable. This was the summer I wished I owned a Kayak. Night-fishing on reservoirs for smallmouth bass was equally challenging. Local highland reservoirs eventually reached full pool but hot weather drove surface water temperatures to well above normal. We adjusted and fished deeper to catch many bass but our catch rate of big fish, those pushing or above four pounds, was less than normal. So when September brought the first cool night air, falling surface water temperatures and increased generation to drop reservoirs to winter pool, I was eager to find improved fishing and some larger fish.
Soon after water generation increased, tail-water fishing began to improve. The flow of cooler water drew fish into shallow, fast water and on our first trip to check my favorite local tail-water we caught a nine-pound hybrid and several trout. On our second trip, on our first drift in the fast water, a big brown trout smashed my minnow lure so hard it almost jerked the rod from my hand. I looked back in time to see the angry fish clear the water by two-feet and the battle was on. It was one of the hardest fighting browns I can remember with multiple water-clearing cartwheels and line-stripping runs. When we finally netted the twenty-five-inch-plus beauty I was trembling like a shy teenager on a first date. Fishing improved so quickly, I talked my wife Tammie into making a short trip after work one evening to try catching some fast-water trout. True to her reputation, she soon caught a beautiful male rainbow, as if it were no big deal. If you’ve not read my book, there’s a story in the last chapter that recounts how Tammie learned to fish and eventually earned the nickname, “Big Fish Woman”, emphasis on “Fish”, not “Big” as she always explains. Our success in that tail-water soon had me wondering when the exciting fall topwater fishing on area lakes would begin so I decided to visit a favorite reservoir and begin the search under the next major moon phase. My goal was to find some surface-schooling striped bass or hybrids.
A week later, on a mild, partly cloudy afternoon two days after a new moon, a friend and I launched his boat in the headwaters of a local reservoir. Surface water temperature at the ramp was in the low-seventies; not as low as we had hoped but close enough I thought we might find some surface feeding black bass or hybrids. We ran down the narrow lake arm until we found a broad, open section with a large cove, a place that should attract some shad and schooling predators. As we idled across open water, the depth finder showed clouds of baitfish close to the surface and an impressive concentration of larger fish below them. There was no question this area was going to provide some good fishing when the feeding blitz began. However, the temperature had increased since we’d left the ramp. In my experience, the best surface feeding action in fall begins as the water temperature falls through seventy-degrees into the mid- and upper-sixties. We sat and watched for breaking fish for more than thirty minutes and covered one point with casts where we saw some smaller fish feeding. But soon we decided to move on. Further down lake the temperature increased further and though we found many schools of baitfish dimpling the surface, they were very small and the larger fish we expected to see below them were absent. It was time to change strategies. 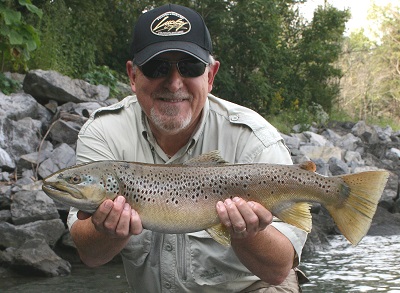