A Little Know-Howe: WVWC's Former Hoops Walk-On and Trombone Player, Looking to Make it in NBA

For sports fans July can be a difficult month.
We’re still nearly two months away from football games. Basketball season (and winter) feel like a lifetime away. Yes baseball can be fun if your team is in it, but we're still a couple of months from the pennant race being a thing.

Maybe it’s because we’re in a slow period for live sports. Maybe it’s because I love hoops. Or maybe I’m just crazy. But for the last two summers I’ve been dialed in to the NBA Summer League. By dialed in I mean watching multiple games each night it’s on.
In my defense, my interest was piqued last year when former WVU star, Jevon Carter was drafted by Memphis. It had been a long time since we had seen a Mountaineer in an NBA uniform and I wanted to get a look. Add in Daxter Miles and Devin Williams on the Sacramento Kings summer league team last year and I was hooked.
This year … more of the same. Carter is back for his second stint in the summer league. He played one game for Memphis in the Salt Lake division before getting traded to the Phoenix Suns earlier this week. Add in John Beilein as the new Cleveland Cavaliers coach (and therefore coaching the summer league team) and

I’ve now got two teams to follow. But, what really has my attention this summer is the Utah Jazz.
The other night while watching the Grizzlies-Jazz game, the camera and announcers focused in on a player with Utah.
Tanner McGrew.
The name sure sounded familiar. Could that be the same Tanner McGrew that starred at West Virginia Wesleyan a few years ago? It turns out it was.
McGrew, the 6-8 former walk-on at Wesleyan, is a member of this year’s Jazz summer league team. McGrew’s story is nothing short of a movie script.
The Buckhannon-Upshur product was not recruited out of high school. Instead he went to West Virginia Wesleyan because of their jazz band program.
In a December 2018 article from The Athletic, Wesleyan band director, Dr. James Moore, described McGrew as a “freaky” good trombone player. After arriving at Wesleyan, McGrew auditioned for and received a trombone scholarship. McGrew spent his first year in Buckhannon attending class, polishing his music skills and playing pickup basketball.

It was in the gym that he was noticed by then head basketball coach, Patrick Beilein. Beilein saw a 6-8 kid that could drain jumpers, had some handle and felt there could be a place for him on the team. Beilein offered McGrew the chance to join the Bobcats as a walk-on.
Good call. McGrew ended up being a two-time All-MEC first team selection and led the nation in rebounding as a junior. He then went on to a pro career in Australia, Denmark and France and then the G-League.
McGrew spent a season with the Memphis Hustle (Grizzlies affiliate). A trade to the Salt Lake City Stars (Jazz affiliate) followed and here we are watching McGrew play for the Jazz in the 2019 summer league.
An unrecruited, “freaky” good trombone playing, Division II walk-on is playing in the NBA summer league. Let that sink in for a minute.
We talked to Tanner this week on the Citynet Statewide Sportsline about his remarkable path to the NBA by clicking HERE.
McGrew is the story of the summer league. But, the West Virginia connections don’t end with him.
It was also announced this week that another former MEC star, Thomas Winbush from Fairmont State, would be part of the Atlanta Hawks summer league roster. Sagaba Konate has signed on to play for the world champion Toronto Raptors in the Las Vegas portion of the league begins this weekend.
For a complete summer league schedule, click here:  https://www.nba.com/summerleague/2019/schedule
The league only runs through July 15, so if you’d like to catch Carter, McGrew, Winbush, Konate or John Beilein get dialed in soon. The NBA summer league doesn’t get us all the way to football season, but it sure is fun for a couple of weeks here in July.
Editor's Note: Photos of Tanner McGrew at WVWC above and photo of McGrew guarding former WVU standout Jevon Carter courtesy of McGrew's Facebook page. 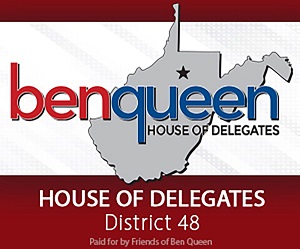