EDITOR'S NOTE: It was a statewide story and it had plenty of roots right here in Harrison County and in Bridgeport. The statewide teachers strike ended up drawing the attention of all of West Virginia as well as the rest of the country.
Temperatures were falling, as was the rain, but the energy generated by teachers and personnel of the public school system was high.
Educators at Bridgeport schools joined forces with those from West Virginia’s other 54 counties in hosting a teacher walk-out. There was no school across the state today. 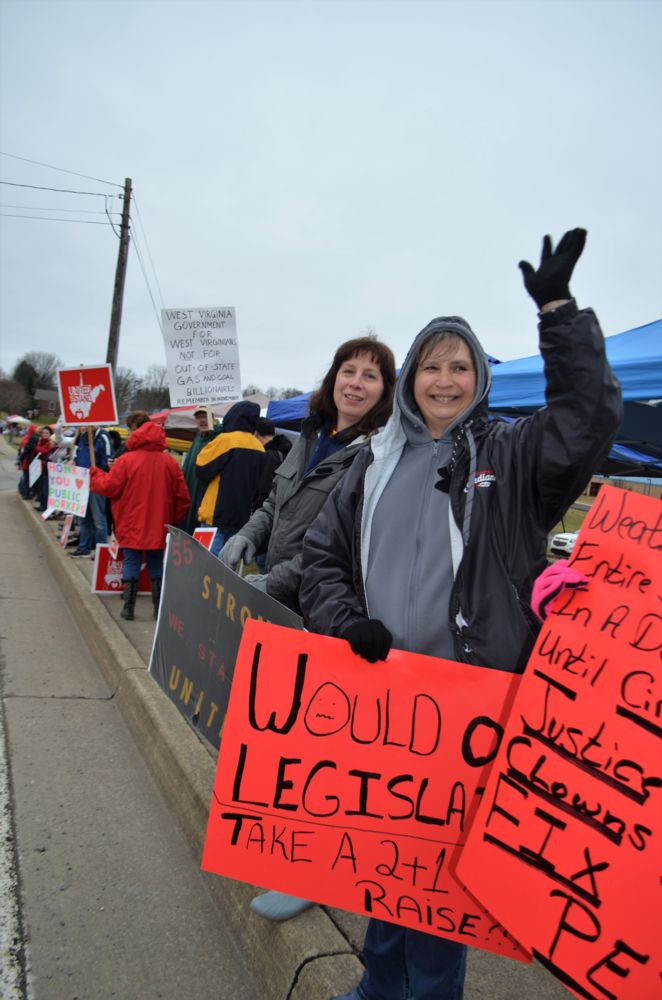 The walkways in front of Bridgeport Middle, Bridgeport High, Johnson Elementary and Simpson Elementary schools were lined with teachers and support staff waving signs as several motorists passing by, showing their support of today’s walk-out, which is scheduled to continue through Friday. 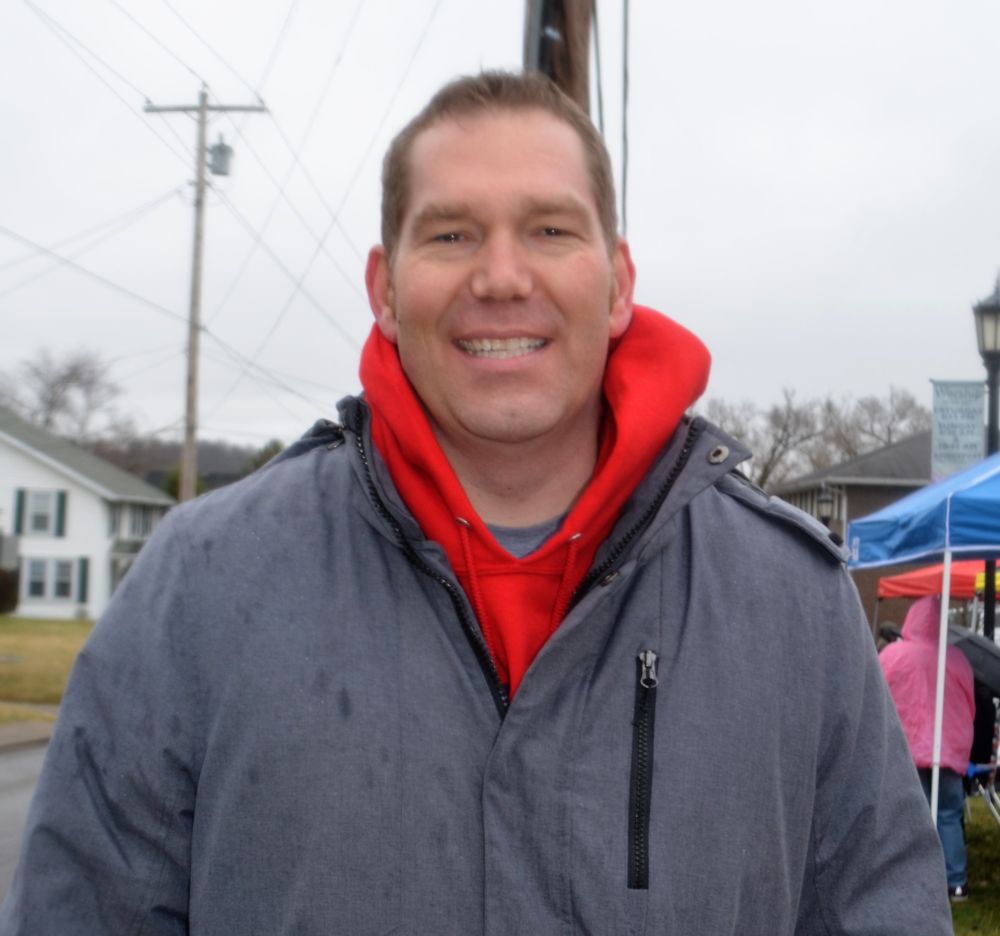 “This has been a process really that’s been going on for four weeks now,” said Matt McCullough of Simpson Elementary. “It started with a grassroots movement in terms of people trying to seek out information first, then holding different rallies throughout the county.”
The movement, McCullough said, has grown stronger and stronger.
“We’ve tried to be proactive to give the legislature ample time to make the changes that we’re hoping for which is why the rallies – the one at Wal-Mart a couple weeks ago, as well as the walk-in (at Harrison County schools) two weeks ago – took place. Really, all of that was done in hopes of avoiding where we are today.”
English teacher Brian Elliott has taken a leadership role at BHS.
“This work stoppage is because the legislation seems to be dragging their feet fixing things,” he said, going on to address the three main points of concern. The first, he said, is PEIA.
“Premiums are too high. We know they put a freeze on it, but that’s a temporary solution that they might or might not do anything with later,” Elliott said. “We want a permanent fix – to make sure premiums are secure, not only for our teachers, but also all state workers.” 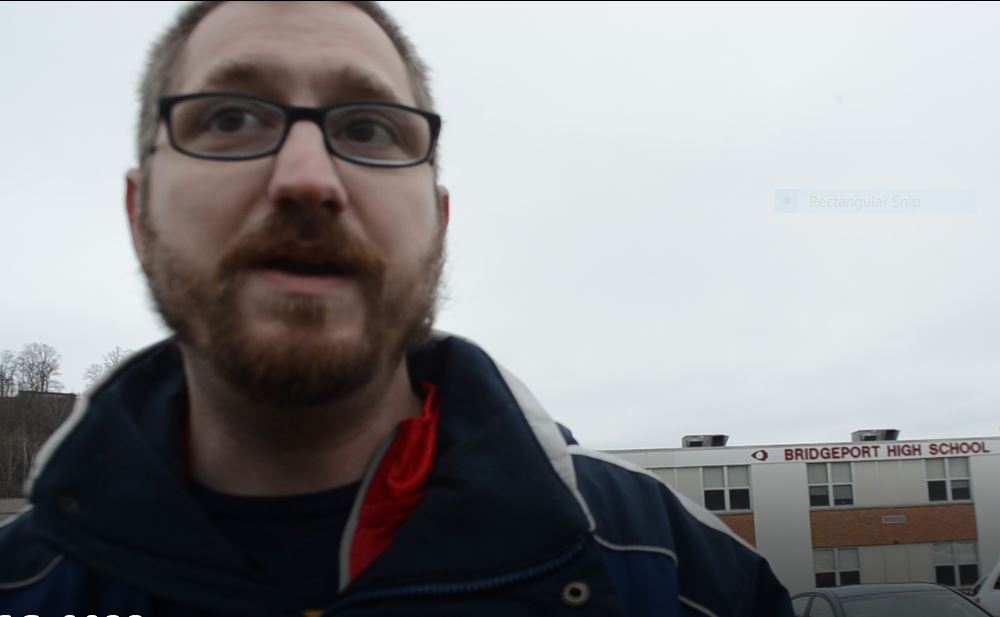 The second point is about salary.
“This is also about a raise – making West Virginia more competitive with states surrounding us. What teachers make in states around us is drastically higher than what we make in this state. The example I can give is I have a friend who graduated from WVU the same time I did; the same 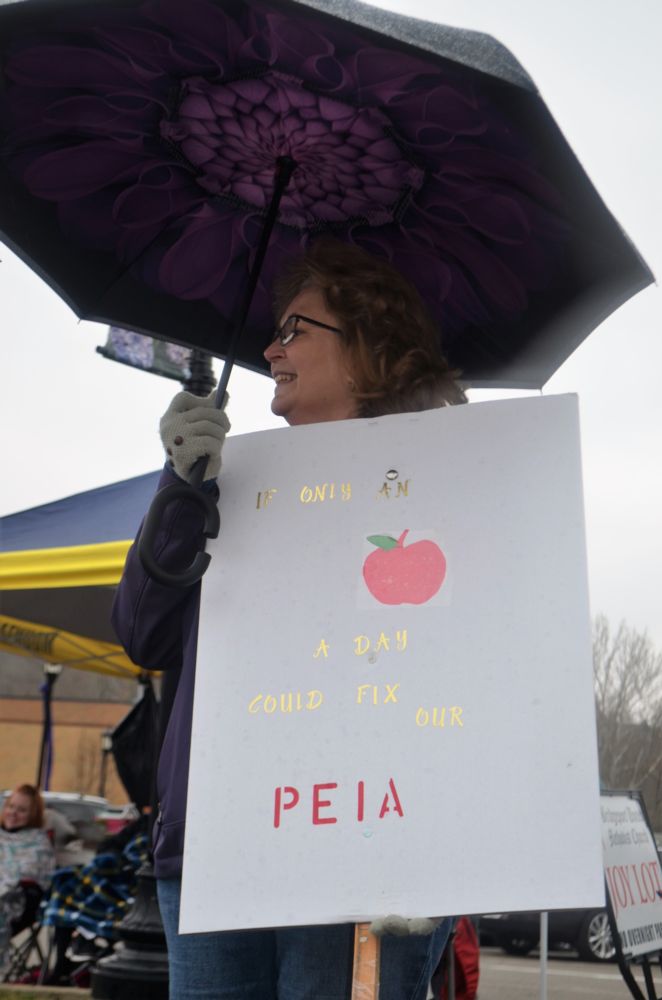 program. We have the same degree, the same amount of years and he’s making $54,000 a year in Cleveland and I’m making $36,000. We have the exact same qualifications and he’s making almost $20,000 more,” Elliott said. “The reason we’re concerned about that in order to attract good educators to this state, there has to be adequate compensation for the work put in and the amount of money we’ve paid for our degrees. Otherwise, we're losing good educators. They're
fleeing the state to make more money elsewhere and you can’t really blame them for that. But it’s going to hurt our education system long-term because talented teachers are leaving. That’s what we’re most concerned about in terms of the raise.”
Seniority is another major concern.
“They’re attacking seniority and that’s another long-term concern, in terms of RIFs and transfers; being let go or transferred to another school,” Elliott said. “Older, more experienced teachers obviously cost more. If you RIF them, 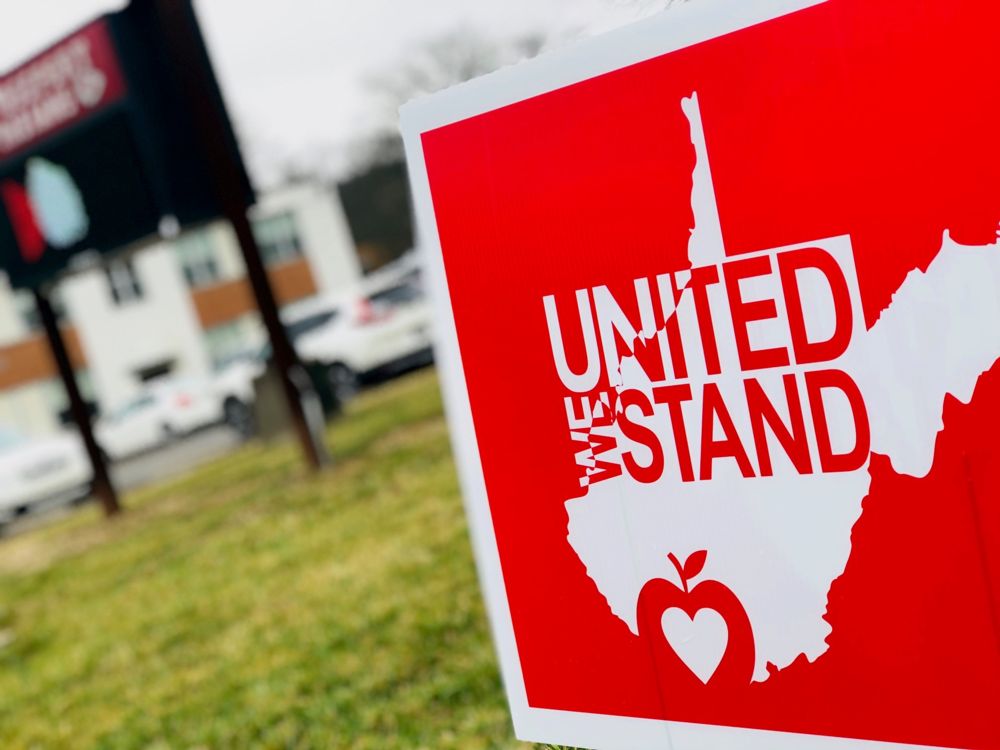 they go off the payroll. If you transfer them and they don’t want to move, they might retire and then they’re off the payroll as well. That takes experienced
educators out of the classroom, as well – which is also hurting the quality of education.”
Ashley Edgell, a BMS educator, said today’s work stoppage is about unity.
“Basically, all 55 counties of West Virginia have gotten together to unite and stand up for our service personnel of West Virginia, state employees of West Virginia and teachers of West Virginia. We’ve been disrespected by our legislature with insulting raises, they’ve made our PEIA insurance unmanageable to the point that people can’t afford to pay premiums, they’re trying to get rid of seniority and invading our privacy with GO 365.”
Edgell hopes the two-day work stoppage helps to 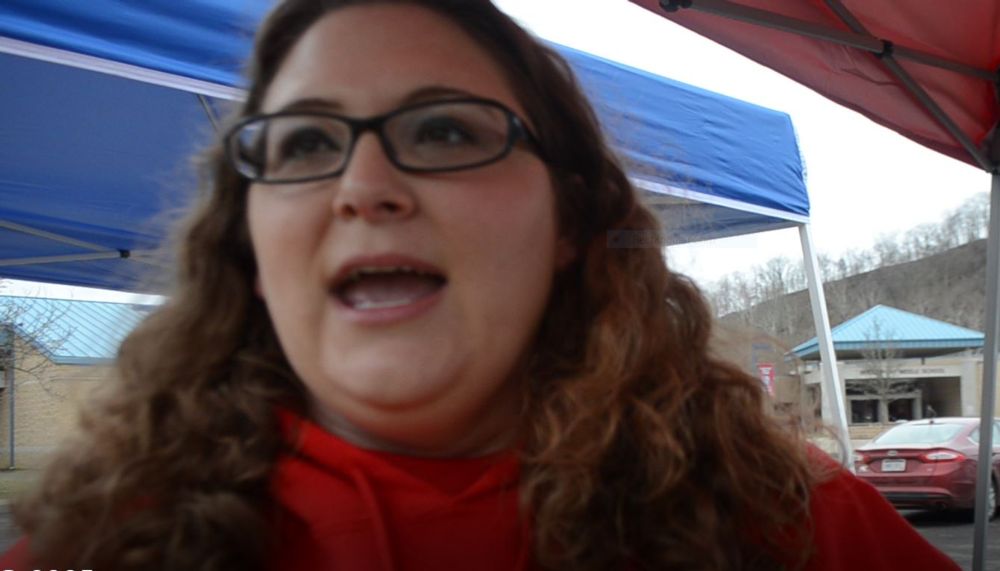 make the West Virginia education system better.
“We aren’t getting much support from the legislature, but the support we are getting from the community makes us proud,” she said.
Individuals and businesses have dropped off food items, brought portable heating and donated hand warmers, said Johnson Elementary Principal Vicky Huffman. She’s pleased with the public support and the efforts of her educators. 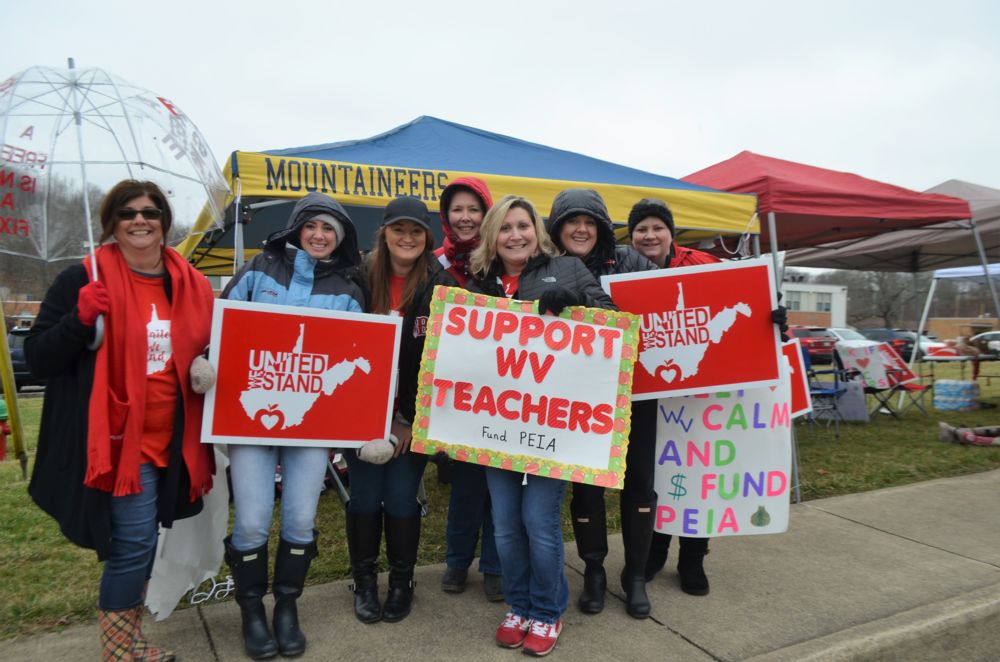 Elliott hopes the enthusiasm displayed today will continue into Friday.
“Then we’ll be waiting for direction from the union on what we’ll be doing,” he said. “If the legislature introduces bills that will fix this problem, it can all be avoided. The ball is in their court. They know what we’re looking for. Union leaders are negotiating with them and it’s up to them to pass the legislation to get this done.”
There is a strong presence at the state capitol today, McCullough said.
“They are voicing our concerns and we’re really hopeful they can work out an agreement and we can just move forward,” he said.
Editor's Note: Pictured are teachers and other personnel representing Bridgeport schools. Look for more photos to be posted to Connect-Bridgeport. 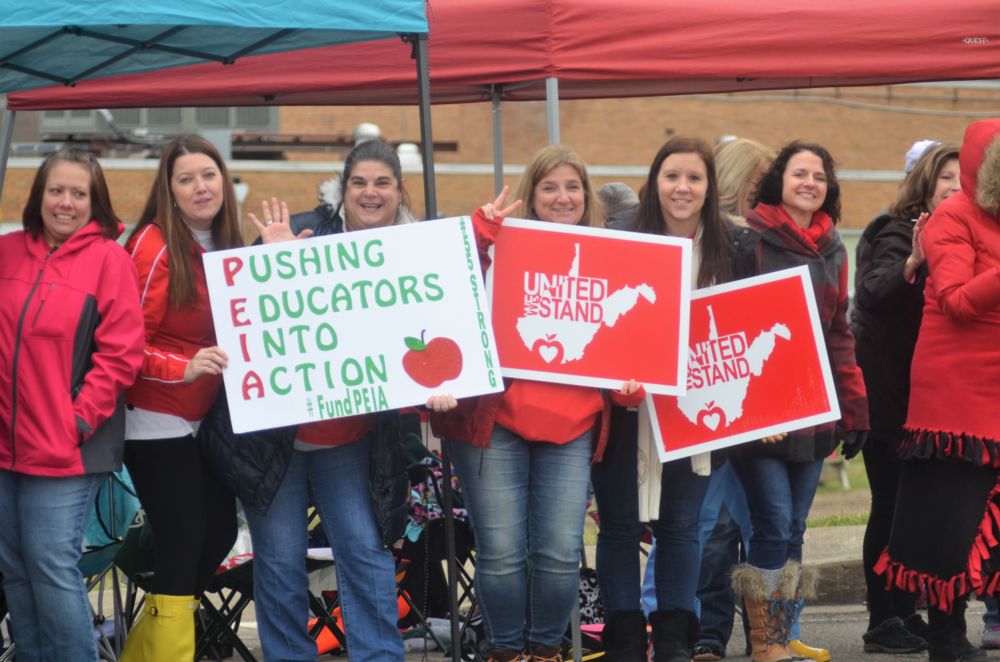