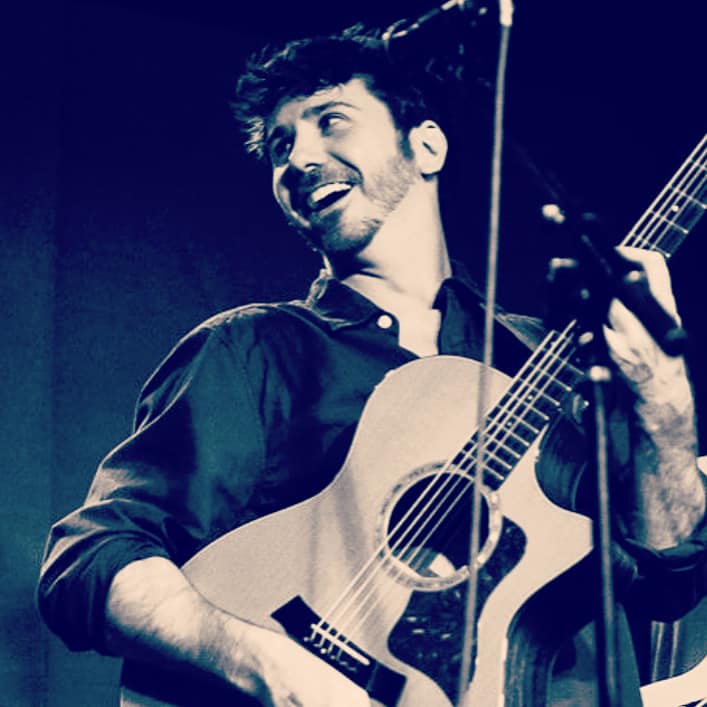 Whether it’s the music of Jimi Hendrix or Johnny Cash, a little can go a long way when it comes to lifting the soul.
Greg Harrison has known that for the last 20 years as he’s delivered his rock/country music to fans all over North Central West Virginia.
Harrison and his band had been playing at the Social Tap, Main Street Station and Brickside Bar and Grille – as well as venues throughout Morgantown and Grafton – when the COVID-19 pandemic struck in March of 2020.
As did the normal daily activities of most folks, Harrison’s came to a screeching halt as venues shut down and folks were quarantined.  Just two weeks in, he decided that the music did not need to stop.
“I knew I wasn’t going to get to play for a while, so why not just try singing live on Facebook,” he said. “I was bored, and I wanted to play music. I missed it.”
Sometime in April - inspired by the live-streamed shows of Scott Simon, formerly of Bridgeport and now based in LA - Harrison began delivering Thursday evening home-based concerts via the Greg Harrison Band Facebook page.
It was a little odd – playing and singing to his phone – but the method proved to be effective. More and more people started tuning in. Those people were of all ages 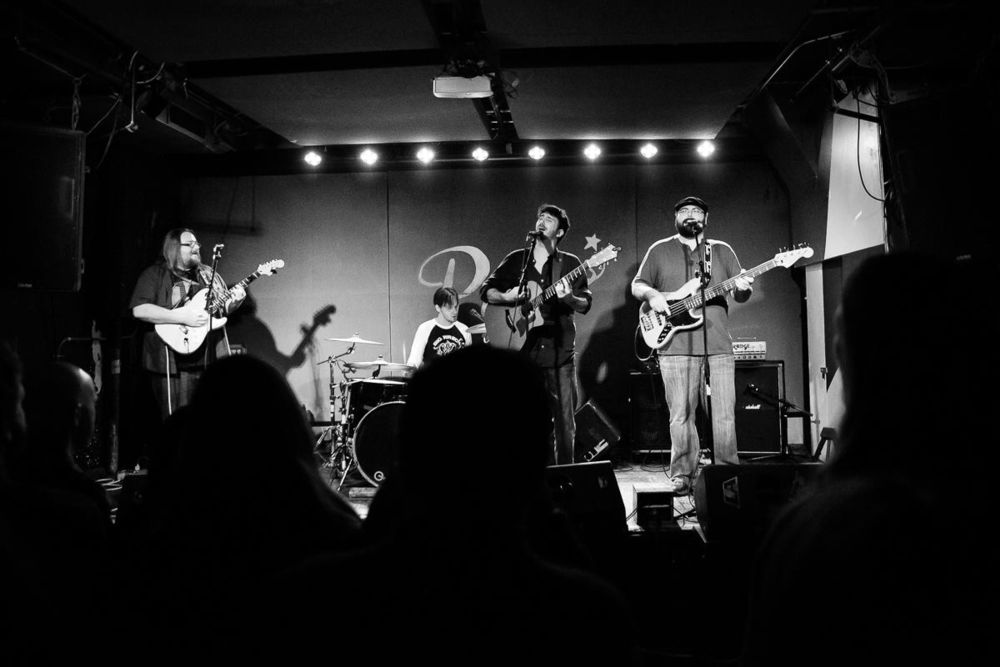 and locations.
“Betty Clark is in her 90s and she gets to listen. That means a lot to me,” Harrison said. “And I got to talking with one guy and found out he was listening from Ireland.”
Locals, including longtime fans, friends and neighbors, made it a point to tune in.
“I told my wife Christy I was taking her on a dinner date and to listen to live music. She laughed and said there’s nowhere to go and we surely weren’t listening to live music,” he said. “So, I ordered from The Social Tap, had dinner at home and tuned into Greg’s music on Facebook Live.”
Live from his home at 8 p.m. each Thursday, the shows were going great. Then came an opportunity to continue the shows in front of a live audience – from his stomping grounds of Maple Lake.
And it just happened to coincide with a holiday tradition. 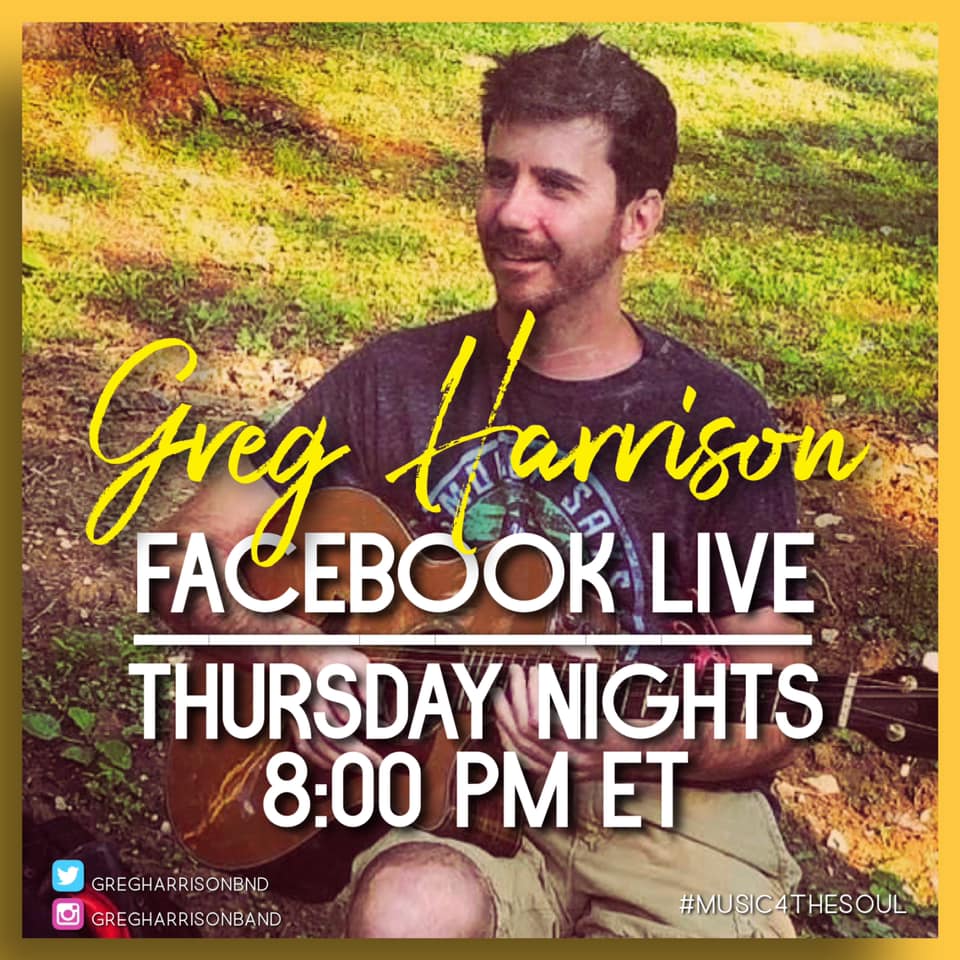 “We always celebrate the 4th of July and the night before, (DJ and Maple Lake resident) Ed Morrison was doing a show. The 2nd happened to be a Thursday, so I thought why not go ahead and do it from my backyard,” Harrison said.
Socially distanced around a firepit, Maple Lakers enjoyed Harrison’s music. He repeats the outdoor shows on occasion, but regardless, fans look forward to Thursday nights.
“Greg being from the lake, a lot of us are on together listening, requesting songs and just having fun,” Cleghorn said. “There’s a live chat going on during his singing. Greg chimes in some, but he has people all over the country listening, including some Bridgeport people who have moved away to North Carolina, Florida, Colorado and South Carolina.”
It’s a way to pass the time and lighten the mood during a stressful time for so many people, Cleghorn said.
Harrison said music is an artform and an important method of communication.
“I just love doing it. Music makes me feel good on a bad day. And if you sing to 85,000 people, they have 85,000 different reasons for singing it back to you,” he said. “Everybody has a different reason to listen to a song; one they might love or have never heard before. They like to sing along and have a good time; maybe a song has meant something to their past or it makes them remember a family member.”
Sometimes, music inspires a new love within the listener.
“One of my good friends had never heard of Tyler Childers and now he is obsessed with his music,” Harrison said. “He had only listened to heavy metal/rock and roll and now he has opened up to other music.”
Often requested is Darius Rucker’s “Wagon Wheel,” which just makes people want to move and dance wherever they are.
But listeners also ask for – and Harrison delivers – everything from Chris Stapleton and Stevie Ray Vaughn to The Black Crowes and The Allman Brothers Band, among other artists.
Harrison also treats his listeners to some of his original music; tunes penned over the past few months, some inspired by the pandemic.
Music is good for the soul, energy and love, Harrison said.
And as Cleghorn added, singing is how Harrison has learned his living. Since COVID-19 hit, he and many other local musicians have been affected. Tips can be sent to Harrison via PayPal, Cleghorn said.
Harrison said he hopes his band is back in full swing soon. His fellow musicians are John Bonnett, lead guitarist/vocals; Sam Nesbitt, bass/vocals and Zack Lilley, drums/vocals.