It's Happening: A Tale of Two Easter Weekend Events 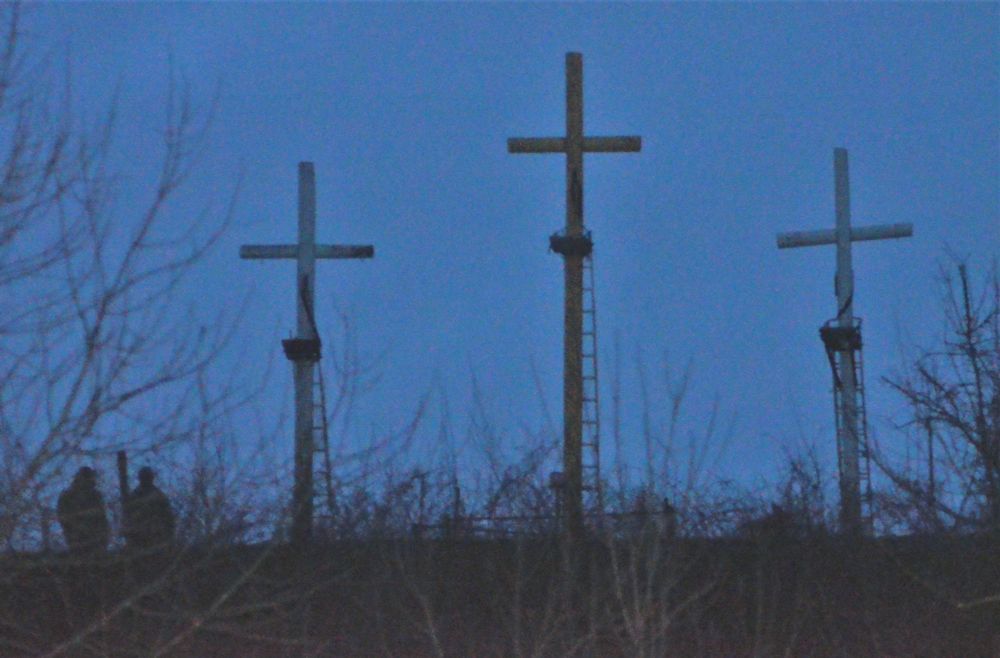 For the past several years, I’ve been writing about two events; both – I have found, like so many other things in life – I’ve taken for granted.
Since the very early years of my and Jeff’s marriage, he and his church friends and families have taken part in the Good Friday live crucifixion portrayal on the Reynolds farm on Route 50 West. Yes, every year – at sunset on that day – three bodies appear on the wooden crosses etched against the skyline. For hours, folks can safely pull their vehicles out of traffic, stop and reflect on the ultimate sacrifice that preceded that blessed resurrection morning, which we celebrate annually as Easter.
I don’t know why I was surprised to learn that the guys are going ahead with their portrayal this year. It’s a symbol of faith and hope and it’s needed this year as much or perhaps more than ever.
So, at dusk on Good Friday, April 10, the live portrayal will take place, as always. Everyone is asked to pull off the roadway – down into the Reynolds farm, just across Route 50  from the Davisson Run intersection, as will be marked – and stay inside their vehicles. Those taking part in the portrayal will be practicing social distancing as has been directed. If you get a chance to ride by, I hope you will be blessed. It is a site to see. 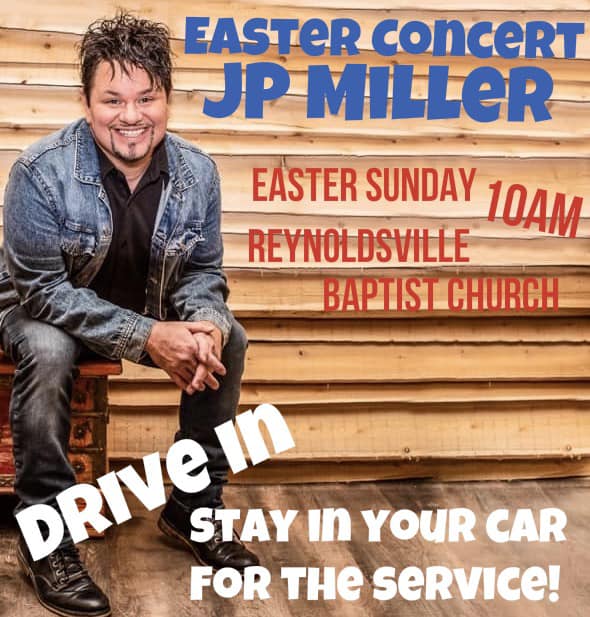 Also taking place this Easter weekend is a 10 a.m. drive-in service at Reynoldsville Baptist Church featuring Clarksburg native, Tennessee-based recording artist and my friend, JP Miller.
JP has hosted many live concerts here in his stomping grounds, many times featuring other talent, both from his hometown of Sevierville, Tenn. and our local area.
Ministering through music is JP’s passion and livelihood. Though he has been grounded from public concerts for the past month or so, he has hosted live-streamed concerts and offered videos to uplift, inspire and even take a few minutes to laugh a little.
Since he packed up and moved south to seek out avenues for his ministry, JP has recorded several albums of traditional gospel hymns and original pieces inspired by his upbringing in West Virginia hills and Reynoldsville Baptist Church. Some of his favorites include “Great is Thy Faithfulness, “I’ll Fly Away,” Victory in Jesus,” “He Leadeth Me” and “At the Cross.”
I’ve known JP his whole life. He was in my Sunday School class when he was little, in our youth group when he was a teen and he babysat our kids. He grew up to be one of my very best friends and I know the sincerity of his ministry. In addition to his musical word, he delivers sermonettes which always seem to fit the moment.
Last year, JP celebrated 20 years in the music ministry which was launched when Lou Wills Hildreth invited him to host the worldwide “Inside Gospel” TV show.  Active in the Southern Gospel Music Association, he has shared stages with many gospel greats. He has traveled the U.S. and overseas and continues to host the weekly radio/TV show, the Smoky Mountain Gospel Jubilee. I know he’s never happier or more fulfilled than when he is singing and ministering to his West Virginia friends.
Swing by Reynoldsville Baptist Church parking lot Sunday if you can. Again, you will be blessed.
Afterwards, you are invited to travel across Gregory Run Road and on down Route 20 for a mile or so to Ten Mile Baptist Church, where my husband, Pastor Jeff, will be delivering a drive-in worship service, beginning at 11 a.m.
Happy Easter to you all. It will be a different kind of holiday, but I know it will be a special one.