It's Happening: BHS Class of 1985 Establishes Scholarship and Challenges Other Classes to Follow Suit 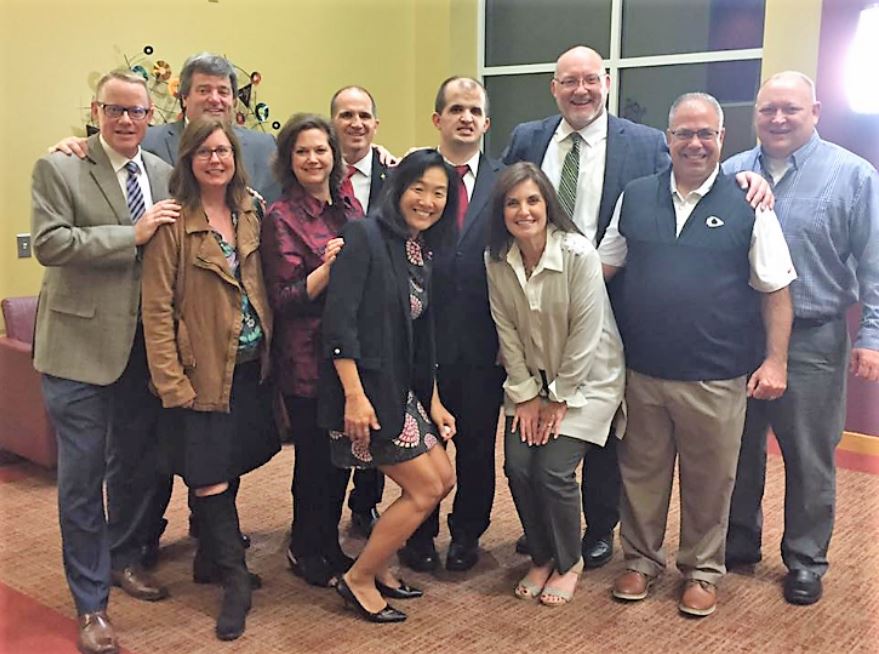 When Alan Dye was inducted into the hall of fame of the Bridgeport High School Alumni & Friends Foundation, a table of eight was filled with some of his closest friends from the Class of 1985.
Some had told Alan they couldn’t attend the dinner, but they surprised him, coming from New York, Tennessee and other states where they work in various professions. A handful of them live and work here in town, but the gang is always glad to spend time together. Alan and his group of longtime friends are like those from several other BHS classes.
And after staying close for the past 34 years, they have made plans to do something which they hope other groups of BHS grads will consider doing.
“We are in the process of starting a scholarship,” Alan said. “Some class members have already sent in money and we want to spread the word to more class members to see if they want to help. We also want to challenge other classes to start their own scholarships.”
About 50 members of the class of ‘85 have joined the class scholarship Facebook page and many have jumped on board with the cause.
The 2019 BHS graduating class will be the first class eligible for the scholarship, but it won’t be the last. Alan said it is hoped that the scholarship will be awarded annually. The ’85 grads are passionate about their endeavor.
“I just think it’s because of our love for BHS,” Alan said. “That’s where we got our start and really found out who we wanted to be and what we wanted to do with our lives. This is just a way of giving back and just wanting that to continue for our kids and their kids and so forth. Even folks who don’t live in our area anymore feel that way about their love and allegiance to Bridgeport, where they grew up.”
Tracey Jordan is one of those folks. Now working as an insurance defense attorney in Nashville, she has also lived and worked in Pittsburgh and Chicago. She likes the big cities, but said there is no place like home.
“It is a most consequential place where I grew up – with the homecoming parade going right through Main Street and everyone feeling safe. I don’t think our parents worried about us,” she said.
Jordan has great memories of her hometown and high school; serving as co-editor of the Ki-Ku-Wa with Stephanie Chang, being in the senior class play and pep club, building homecoming floats at Tim Burkett’s house in her very own neighborhood.
“There’s nothing I look back on – growing up or during high school – that I think of in a negative way,” Jordan said. “I think all of us felt growing up in Bridgeport and going to Bridgeport High really formed us as adults.”
Her parents no longer live here, but she - like several of her high school friends – return to Bridgeport once a year or so to attend homecoming festivities or a random football game. The city has grown much since she went to school here, but pepperoni rolls still rule and the small-town feel remains.
The class of ’85 has decided on some parameters for its scholarship.
“We want to help a student with financial need,” Alan said. “He or she can be a 4.0 student, but don’t have to be. We will give the scholarship to a student who carries a 2.8 GPA or above. They might do community service or maybe their situation doesn’t allow them to do community service."
The class is trying to focus on community giving, but not necessarily in the traditional way.Perhaps there are students who work to contribute to family income or take care of younger brothers and sisters. A student may not be at the top of his or her class, but still serves as a good example to classmates, Tracey said.
Another BHS graduating class might want to establish different scholarship perimeters; perhaps in a certain field of study or for a trade school, Alan said.
The options are many, but the ultimate purpose is the same: To financially assist a fellow BHS graduate, helping he or she to reach full potential in whatever schooling and career that their paths might take.
“We have respect for what they do and what their mission is,” Alan said. “We kind of want to keep that Indian spirit passed down from class to class.”
Members of the class of ’85 who want to contribute to the scholarship can contact Jordan via email at traceyajordanesq@gmail.com.
“We want to make sure it’s up and running by April, so we can at least give a minimum amount for our scholarship this year and hopefully within the next year, it will either grow to multiple scholarships or the scholarship will be awarded at an increased amount,” Tracey said.
She, Alan and their classmates encourage other classes to set up scholarships through the BHS Alumni & Friends Foundation, which has already done the necessary legwork for awarding scholarships, such as establishing a tax ID number.
They will earmark funds for the scholarship of a specific class and it’s all funneled through that umbrella,” Tracey said. “It’s really easy doing it this way.”
To start the process of establishing a scholarship for another BHS graduating class, contact the BHS Alumni & Friends Foundation HERE.
Editor's Note: Pictured are some members of the BHS Class of 1985. Taken at the 2018 BHS Alumni & Friends Foundation Hall of Fame dinner are Jeff Roupe, Jeri Bice, Chuck Steel, Tracey Jordan, Alan Dye, Stephanie Chang, Nathan Dye (Class of 2007), Jennifer Fresa, Tim Burkett, John Cole and Eric Conner.
Read a related article about the 2018 Hall of Fame inductees and Dye's speech at the Oct. 27 dinner held at Bridgeport Conference Center HERE.