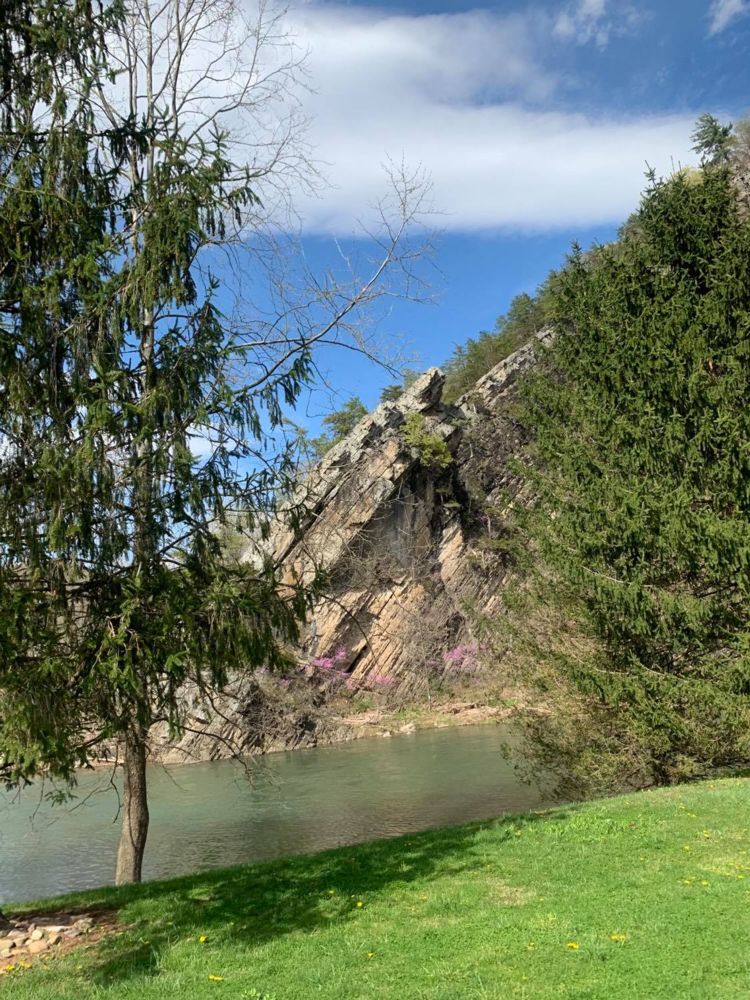 Coach Bob Huggins says if his mother was not the greatest person in the world, she was sure close.
“She cared for everybody. There were three of us boys and four girls, plus she cared for a multitude of neighbors and friends. Everyone loved her,” he said of Norma Mae Huggins, who passed in May of 2003 after just a five-month battle with colon cancer. At the time, she lived in the Canton, Ohio area.
“And she was so excited when I decided to come back home. She was ecstatic about it,” Huggins said.
His mom was his rock, his best friend in the world.
“And when she passed, it was rough; rough for all of us,” he said.
Sharing those words and memories brought tears to the eyes of the man known for his longtime coaching of the WVU men’s basketball team. It was quite humbling to experience that sincerity and compassion.  Just steps away, his daughter Jacque and several others were fly fishing in the waters of the North Fork River.
Held at Harman’s Cabins in Grant County, the recent three-day event had a fly-fishing theme, but the purpose was to pay tribute to Norma Mae Huggins. The occupant of each cabin had made a generous pledge to her endowment fund. And by the time the last trout of the week had been caught, the total rang in well over $100,000.
Spearheading the event was Curtis Fleming, host of Fly Rod Chronicles, aired worldwide. Always up for telling a tall fish tale, the Bridgeport native also had plenty to say about the reason he had gathered with dozens of supporters; an event which evolved from the Bob Huggins Fish Fry, an annual fundraiser for the endowment fund. 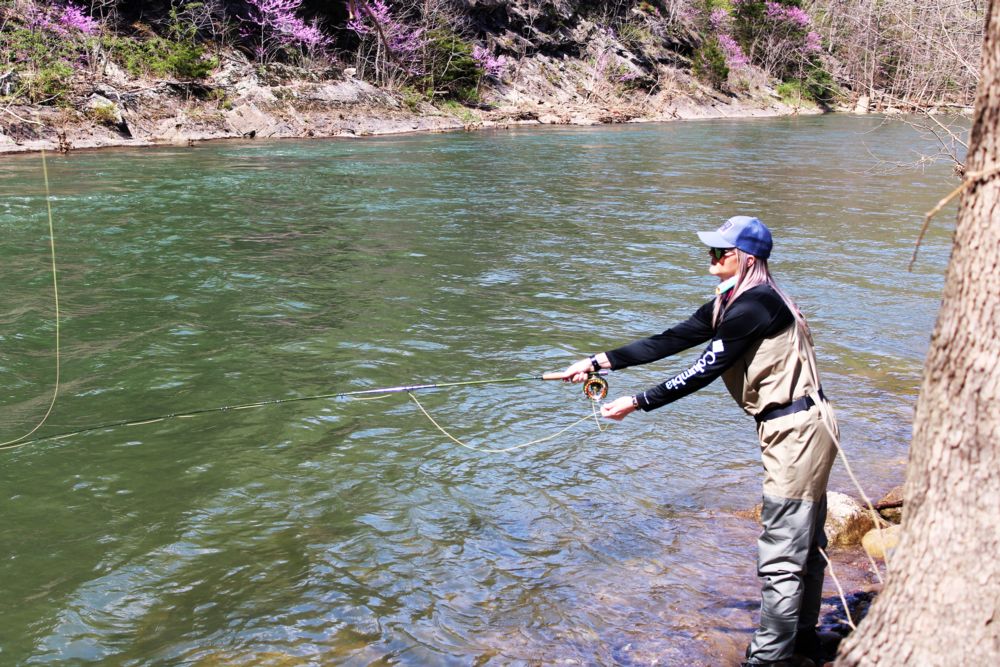 “It’s been held in January in the past, involving 1,500-plus people,” he said, “but because of COVID, this year’s event had to be held virtually.”
In the past, the fish fry included auctioning off a night at Harman’s Cabins. Thanks to Todd Harman and his family, 2021 marked a unique evolvement as all 20 cabins were sold for the cause.
“Everyone rolled in Tuesday – 80 of Huggs’ best friends,” Fleming said. “They came to hang out and have fun; some learning to fish one-on-one.”
Among those picking up the fly rod for the first time was WVU Football Coach Neal Brown. 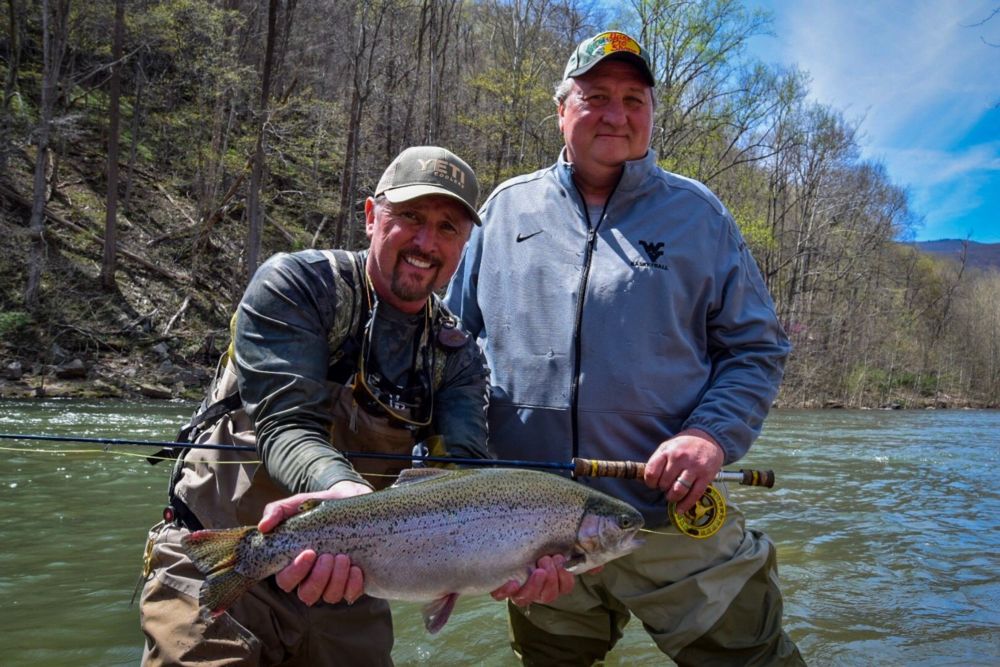 “I’ve never done it before, but I’m looking forward to it,” Brown said Tuesday afternoon just before he took to the trout stream. “This is my first trip to Grant County and I’m excited about it. It’s a beautiful, great day.”
Aside from tackling his West Virginia bucket list, Brown said what really lured him to the event was the cause.
“To be honest with you, I believe in Huggs’ vision for his mom’s foundation. I respect him immensely for what he’s done for our state and the cancer institution,” he said.
Well into six figures was raised this week for the endowment. And that’s a drop in the bucket to the $8 million raised to date. 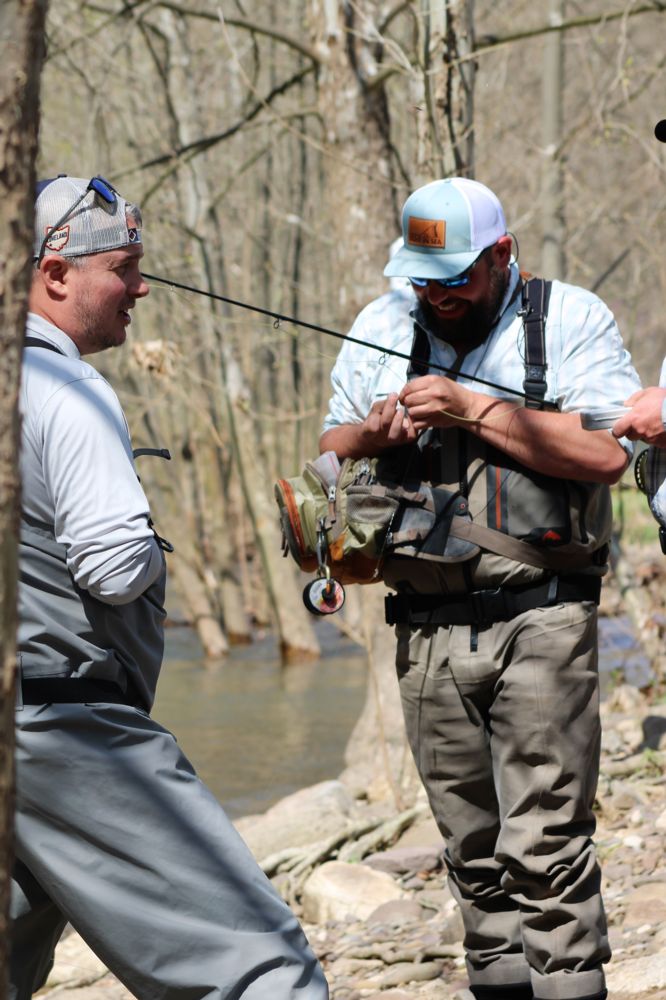 It all started, Huggins said, when his mom died.
“You know how people send flowers when someone passes – and send cards and letters and so forth. I said to my two brothers and four sisters, why do people do that? Why don’t we put in the newspaper to please in lieu of flowers, if you could please send a donation. So, now we have this foundation,” he said.
It’s been a passion project through the years, one he and his wife June have continually contributed, making sure it continued to grow.
Huggins cannot say enough about how incredible everyone has been to support this vision – this dream. He sang the praises of several, including Steve Antoline, who was instrumental in forming the foundation and who, along with his wife Jamie, is a major benefactor; Hannah Hazard-Jenkins, Director of WVU Cancer Institute for her efforts and expertise in cancer research; and Albert Wright, CEO of WVU Health System.
As Huggins detailed the passion, Wright detailed the vision; the result which the endowment is to eventually accomplish. As the academic medical center of the great state of West Virginia, WVU Health System’s job is to improve the health trajectory of the state, he said.
The Morgantown-based hospital center is growing, the latest project being construction of a new Children’s Hospital. To date, 17 care points/clinics are also located around the state. It’s an ever-evolving effort; someday which will include a comprehensive cancer center, offering in- and out-patient treatments and services, inclusive of radiology, oncology, and surgical oncology.
“When you walk out of the football stadium, you used to see a big general hospital. In the future, we want it to look like a collection of five or six special institutes – including Heart and Vascular, Eye, Children’s Hospital and a Cancer Center,” Wright said.
When you combine people, programs and physical planning, miraculous things happen, Wright said.
“We don’t have approvals and plans yet, but we’re starting to look at physical planning of a long-time vision, a cancer hospital on the campus of Morgantown,” Wright said. “Coach Huggins bought into that vision. He’s our biggest supporter, fan, and fundraiser. Every day we talk about it, it’s closer to reality.”
A Morgantown native, Norma Mae Huggins loved West Virginia and West Virginians, her son said.
“This is what she would have wanted – to help save lives,” he said. “Everybody I talk to about cancer says, ‘Coach, I wanted to go to Cleveland Clinic or another cancer hospital and couldn’t get in. We need a cancer hospital for West Virginians who have cancer.”
It’s for a great person – and it’s a great cause, Coach Huggins said.
An episode of Fly Rod Chronicles with Curtis Fleming was filmed in connection with the event. Among fishing guides was Bridgeport native and current Nashville resident Nat Frederick, who also offered his guitar and vocal talents. See additional photos in the gallery below.