It's Happening: Scandinavian Highlights and Opportunities 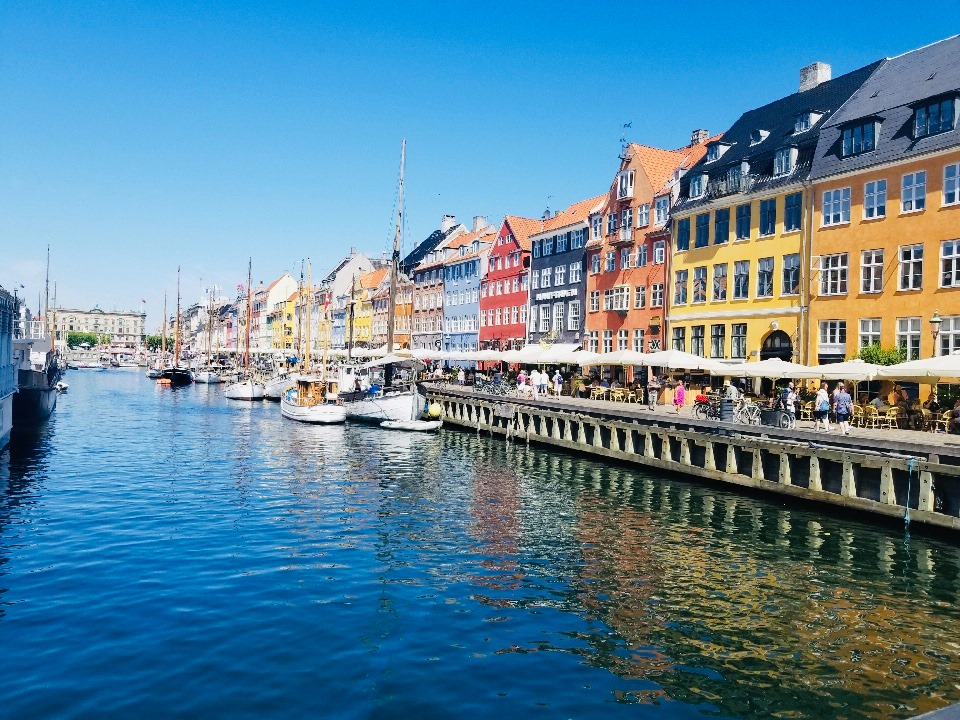 The motto in our city of 8,000 is “Opportunity Lives Here.” In late-June/early-July, a group of Bridgeport folks – mostly Bridgeport High 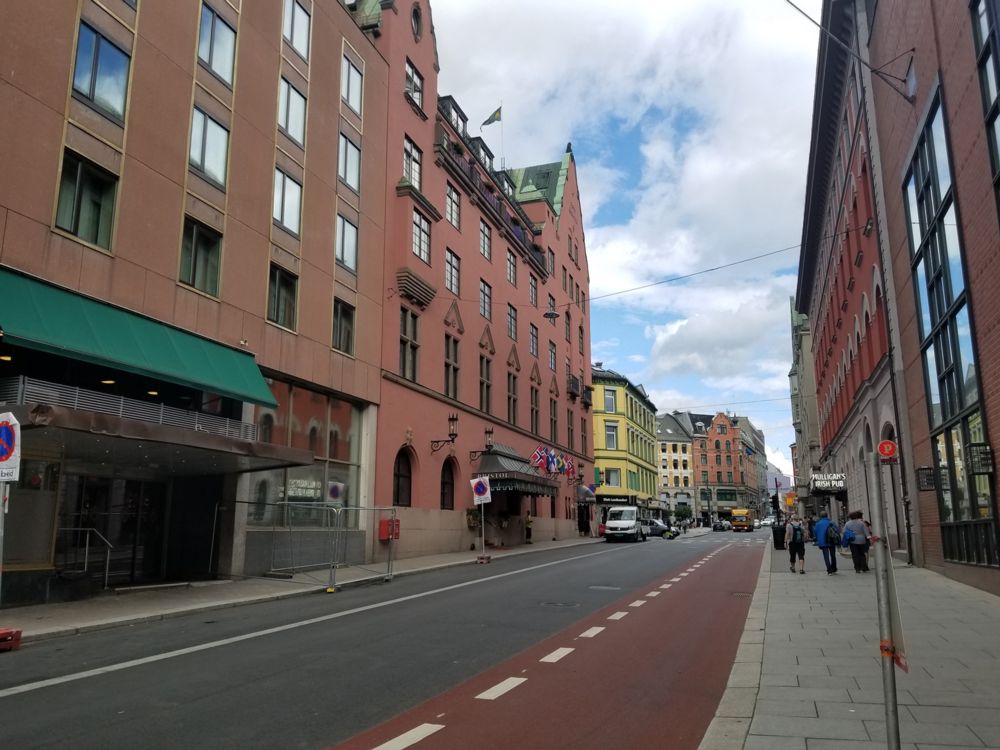 School students – were able to venture to Europe for an 11-day stay that would include visits to five countries.
Facilitated by EF Tours and sponsored by BHS French Teacher Madame Dea Garrett, the trip was a once-in-a-lifetime experience that provided first-hand insight into the opportunities available and lifestyles observed in the capital cities of France, Belgium, The Netherlands, Denmark and Norway.
I’m going to highlight the trip in reverse. Traveling from Copenhagen, Denmark via ferry on the rocky North Sea, we last visited Oslo in Norway – one of the three Scandinavian countries, but the only country we visited that was not part of the 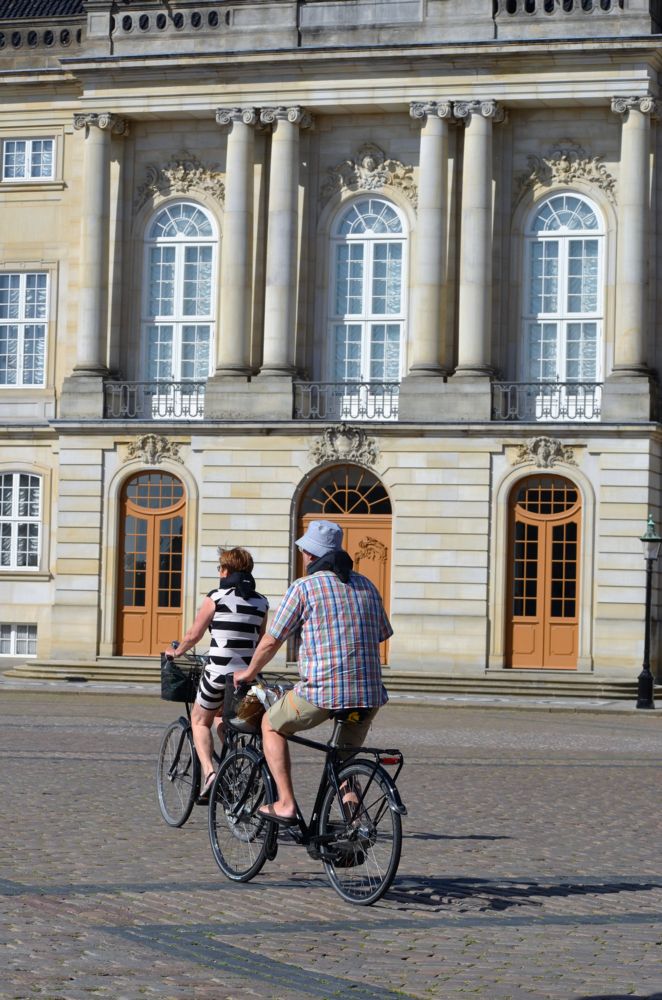 European Union. According to survey, studies and lots of number crunching, this is where the happiest people in all the world are said to live. From day one, I got it. The sun shines there right now 21 hours per day, setting around 1 a.m. and rising at 4 a.m. How awesome! But then, life in the far-north country features just as much darkness in the winter. Another thing I loved about Oslo is that one if its biggest industries is fishing – for salmon, my very favorite food. I was able to sample the salmon of the clear, cold Norwegian waters and it was amazing. Despite my personal preferences, the reason that Norway and Denmark both rank at the top of the happy people chart is the sharing nature of their society. 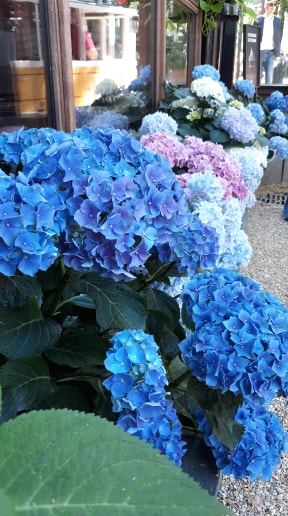 We learned most about this while visiting Copenhagen. Taxes are very high, but college education, as well as doctor visits and even hospital stays and procedures, are of no cost to residents. Tax percentages are according to income; the wealthiest paying as high as 60 percent. But there is no poverty rate and most of the Danish, in addition to owning a home, own either a yacht or summer home. The coastline was beautiful and diverse. Among the many sights we took in from our bus while enroute to the 16th century Kronborg Castle (the model for Elsinore in “Hamlet”) were topless sunbathers, herds of cows, thatched-roof houses and the lifelong home of Karen Blixen, author of “Out of Africa.”
Among the many other memorable moments in Scandinavia were an up-close-and-personal 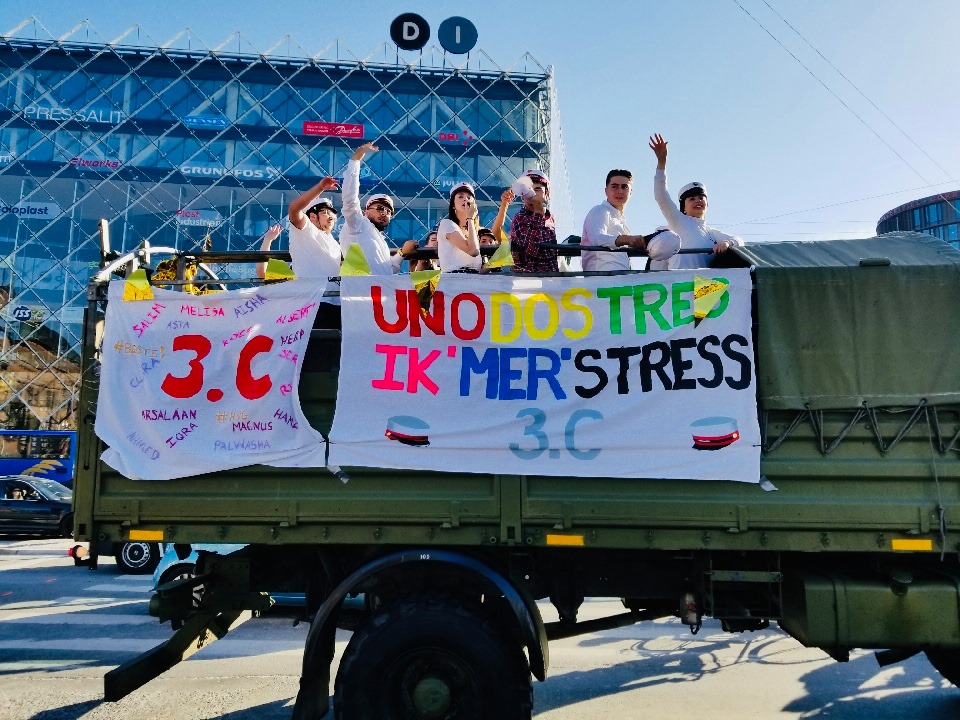 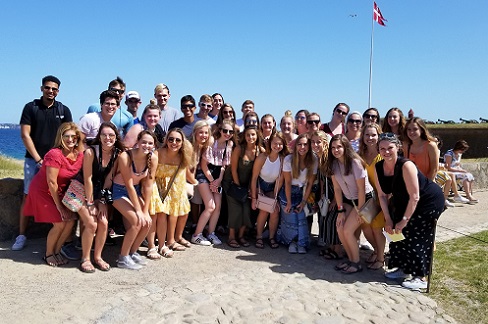 visit with a family of swans, shopping at a Danish flea market and a Sunday afternoon of live guitar/vocal music by Gian Paolo Pastor near the Stork Fountain while sipping coffee at an outdoor café and watching children blow giant bubbles. It was sort of like a dream until one of the many party buses showed up. It was studenterkørsel weekend and that means high school graduates ride around atop these giant trucks, drinking alcoholic cider and beer, blowing whistles and sporting sailor-style, keepsake graduation caps. People cheer and wave as the music blasts and the kids get out of the vehicle and perform various dares, like dancing around in the fountain. When the antics stopped, the truck left and the mellow guitar music continued.
Street performers were in all the cities we visited. Some were very good. It is courtesy to tip anyone you stop and listen to or take a picture of. We 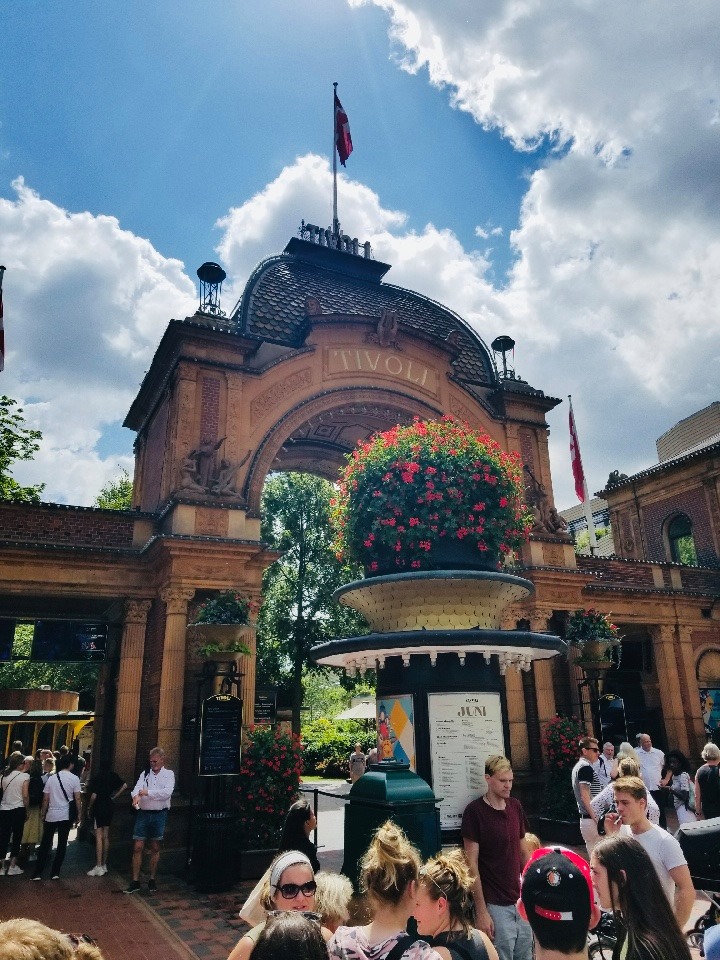 floated several Danish Krone to the artist who provided our Sunday afternoon serenade. (Sample his music below.) Copenhagen is also the home of the Tivoli Gardens, the world’s second-oldest amusement park which, like all of Scandinavia which I saw, features the largest, most beautiful flowers – including lots of hydrangeas. Though very heavily visited, it features a laidback atmosphere, very different from most amusement parks. We stayed in hostel just a few blocks from Tivoli. On Saturday night, our last night in the city, some watched some amazing fireworks from their upper-floor windows. There was no air conditioning, but we were welcome to open our crank-style windows to take in some fresh air and sounds of the city nightlife.
Despite the opportunities and the culture basking, I believe everyone on the trip was excited to head back to Bridgeport, our home sweet home. For one group of travelers, it was a 24-hour commute which included three flights.
Part 2 featuring our stays in Paris and Amsterdam, as well as an afternoon visit to Brussels, will be published next week.
Editor's Note: Every student and chaperone on the trip will forever remember the kind, compassionate, knowledgeable spirit and profesionalism of our tour guide, Sigi. She is pictured (far right) with the group above.