If the view of the new Bridgeport Indoor Sports Recreation Complex, The Bridge, does not catch your attention when driving up Forrester Boulevard, then what one will likely see entering it will likely catch your attention.
During the work session portion of Monday’s Bridgeport City Council meeting, a massive – yet light – 12 foot in diameter logo (the logo of The Bridge), is looking to be hung from the ceiling. The entry way fixture, which will have height easily able to have that sort of center piece, would be made of a composite material. 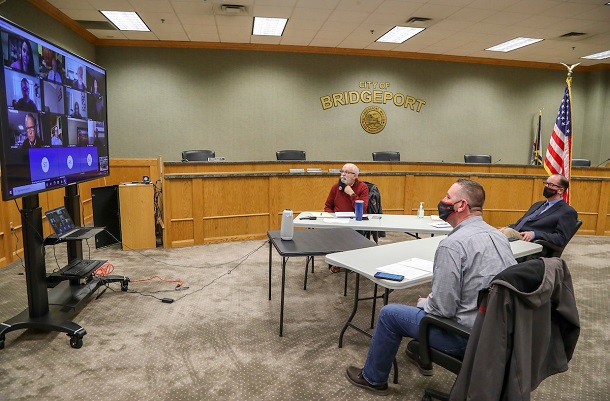 However, there is a speed bump.
The initial cost for the piece was $12,000 and featured the City of Bridgeport logo before The Bridge logo was opted for. The producer of the centerpiece that will be made of a composite material called microlite, KMDI, came back and said they forgot to add the cost of shipping at $3,000.
Then, when the change was made to the new logo, it went to $20,800. While Council was not necessarily opposed to the cost, they were not necessarily pleased with cost increase and the surprise addition of shipping.
Council member John Wilson asked Richard Forren, of architect Omni Associates, to go back to the company and ask a few questions. First was why there was a cost increase, of $5,800 from the first design to the second when they are essentially the same and same size. Second involved if they would consider honoring their original price for an item that should weigh less than 50 pounds, said Forren.
If that does not come back in an acceptable manner for Council, the governing body may opt to go with a plan suggested by Council 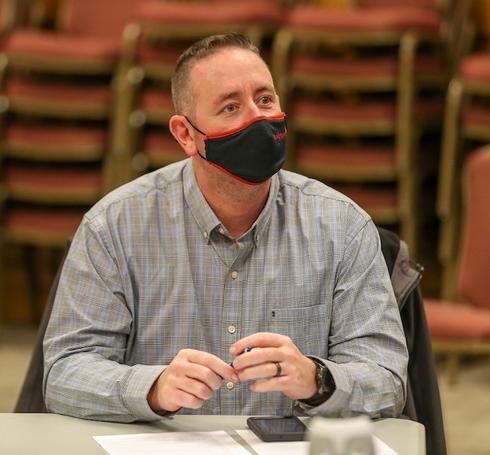 member Robert “Bob” Greer. Greer said if the price is too high then perhaps local artists or artisans could handle the project.
The goal, however, is to make sure it is ready when the facility is open. It is tentatively still set for spring of 2021, which would be around a June timeline.
The Bridge Director Droo Callahan also talked during the executive session about the complex. He said there is one question that comes up consistently with the public.
“The number one question is the ‘fees are too high.’ We haven’t even talked about fees,” said Callahan, who added later that “in 18 months no one will be talking about fees.”
After that, Wilson voiced praise during the work session to the Bridgeport Public Works Department. Wilson’s comments came as the result of cleaning up property throughout the city by the department.
When the regular session began, Council approved a change order request for $61,753.66. The money will be used for electrical work as well as some plumbing. That was $4,000 less than initially requested in the change order as one item needs review by Forren. 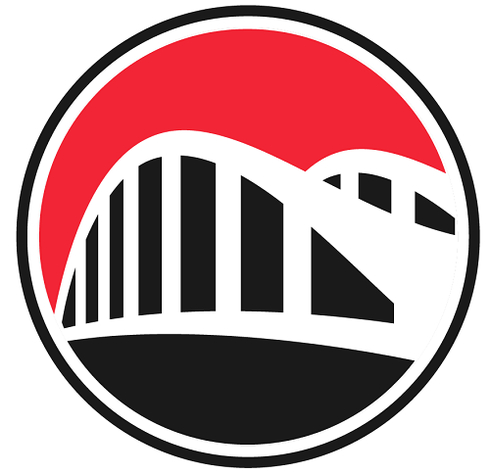 “The majority of that is related to electrical issues,” said Bridgeport Parks and Recreation Director Joe Shuttleworth last week.
When asked about a specific project where savings in other areas allowed something planned to happen later, Shuttleworth said batting cages have been installed. He said some of the dollars on the electrical side are paying for that.
“The electrical work for that involves conduit needed for the power for the lifts on the screens for the cages,” said Shuttleworth. “It’s those types of things that this change order will address as well as changes in the design of the concession stand and the electrical components needed to meet the design changes. There are others as well.”
Council also approved the Bridgeport Development Authority’s recommendation to approve a Façade Improvement Grant for the Dairy Queen Grill & Chill on Main Street. The exterior work is part of a roughly $130,000 project.
You can read about that project HERE.
Council also set a meeting for the annual goal setting session that helps shape the city’s budget proposal. The meeting will be held Feb. 15 at the Benedum Civic Center. It has been delayed due to COVID-19.
Editor's Note: Top photo shows, from left, City Manager Randy Wetmore, Mayor Andy Lang, and Parks and Recreation Director Joe Shuttleworth taking part in the virtual meeting. Second photo is of Shuttleworth addressing those taking part, while the bottom picture is the graphic showing The Bridge logo that will be incorporated, if all are agreeable, into the main entrance way of the indoor rec facility and hang from the ceiling.