The outstanding performances by the Concert Band, Jazz Ensemble, Women’s Choir, and Show Choir ensured that Bridgeport High School’s name would not be forgotten by the dozens of high school and middle school bands that participated in the Music in the Parks competition at Williamsburg/Busch Gardens on May 3–4, 2013.
Competing high schools from across the east coast were divided into categories determined by school enrollment and accreditation status. Each presented two musical numbers for adjudication, resulting in ratings of superior, excellent, good, fair or poor.  BHS swept the High School Class I A division, earning first place trophies in every category in which they competed.  The Women’s and Show Choirs, under the direction of Ms. Robin Bohn, each impressed the judges with their beautiful performances, earning both choirs ratings of excellent.

The competition provided the opportunity for BHS Band Director Chris Hayslette to highlight his specialty of preparing and directing exceptional concert band and jazz ensemble performances.  Both groups were awarded superior ratings after mesmerizing judges and audience members with a superb presentation of their musical talents.  The most engaging performance of the entire competition was the BHS Jazz Ensemble’s arrangement of “Paper Moon,” with Brooke Cottrill providing lead vocals.

At the conclusion of the awards ceremony Saturday evening, the most prestigious awards of the competition were presented to the highest scoring individual and ensemble performances, regardless of division.  As if to put an exclamation point on the domination by Bridgeport High School earlier that evening, Brooke Cottrill received the Individual Soloist Medal, and both the Jazz Ensemble and Concert Band won the Overall Champion Trophy.  Competing this past weekend were many, much larger public and private schools, traveling from as far as Georgia. Congratulations to BHS on earning seven-time top honors.
Story and photo submited by Amy Funk.
Pictured: BHS Band and Choir students proudly display their trophies after this past weekend’s Music in the Parks awards ceremony. 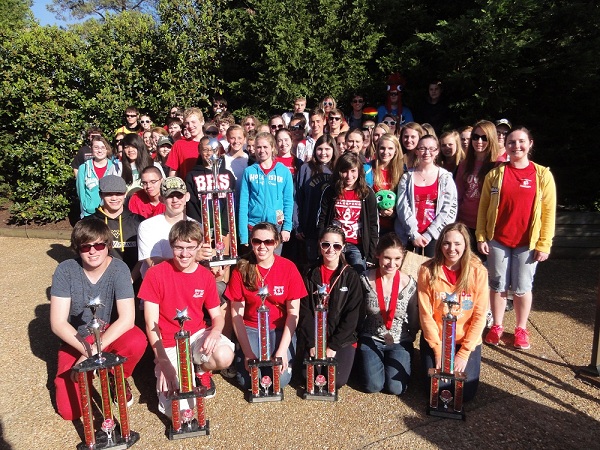 Congratulations to Bridgeport High School's Jazz Ensemble, Concert Band and soloist Brooke Cottrill! What a fantastic experience for our students and such an outstanding accomplishment as well. Great job to the choirs, too. Thank you to the hard-working directors and students, as well as your very supportive parents. You make Bridgeport proud!