Bridgeport High School Senior Bruce "Randy" Keener II at last week's meeting of the Harrison County Board of Education for his educational acheivement.
Recognition by Keener is nothing new. Along with being a state record holding swimmer on the swim team for the past four years, Keener has 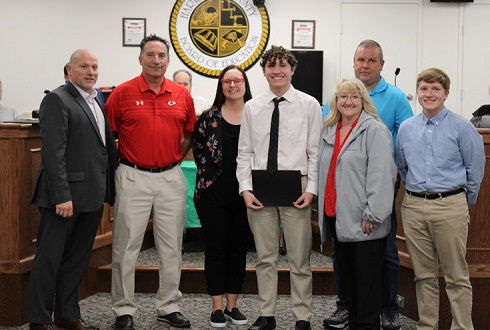 excelled in the classroom and earned the respect of his peers and the BHS faculty along the way.
This year, Keener has been named one of Bridgeport's Students of the Month. He earned that designation in August. Keener also was recenlty named Mr. BHS and will be one of four students to address the crown at the May 28 graduation ceremony to be held at Wayne Jamison Field.
Last week, on Tuesday, May 17, Keener's efforts in the classroom and on the leadership front, paid off for his college education. He was presented with a $2,500 National Merit Scholarship.
Keener received recognition from Harrison County Superintendent Dora Stutler as well as the elected members of the Harrison County Board of Eduation. Keener was joined by family and members of the Bridgeport High School administration during the ceremony at the Board's chambers in downtown Clarksburg.
Editor's Note: Photo of Keener displaying his scholarship is from the Harrison County School District's Facebook page.