The first step in a new act that will help the Bridgeport Fire Department took place at Monday’s City Council meeting.
Council heard the first reading of an ordinance that would allow the Fire Department to pursue cost recovery fees.
In 2018, state legislation was passed to permit County Commissions to authorize volunteer and paid fire departments within the County to charge fees up to $1,500 for personnel and equipment used in firefighting services, victim rescue and the cleanup of debris and hazardous materials. 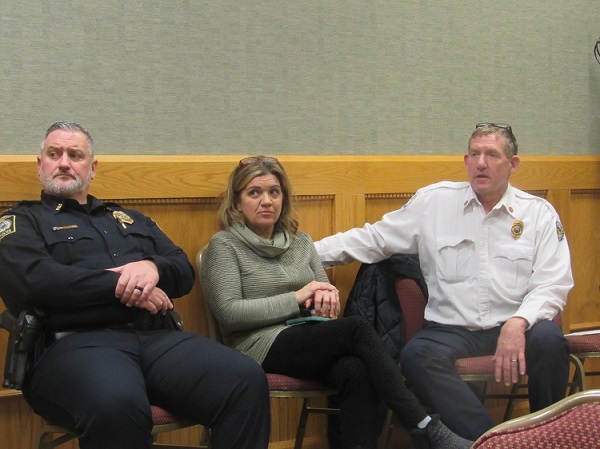 Harrison County capped the fee that fire departments in the county can charge at $500 with exceptions made for incidents or accidents involving hazardous materials or extended search and rescue and water rescue incidents.
Fire Department Chief Phil Hart said he estimates they respond to five or six calls involving hazardous materials a year but when they do, the accident generally involves significant spillage and a lot of resources are used.
The City of Clarksburg enacted its ordinance for recovery fees in October of 2022.
If passed, a portion of the Bridgeport Fire Department’s costs would be recovered through charges for personnel and equipment from insurance companies related to their insured’s incident or accident that caused the Fire Department’s response. Any costs recovered will lower the amount of funds from the general fund that are required to operate the Fire Department.
City Manager Brian Newton said the $500 cap is something that could be increased down the road once cities have enough time under the proposed plan to see how effective it is. 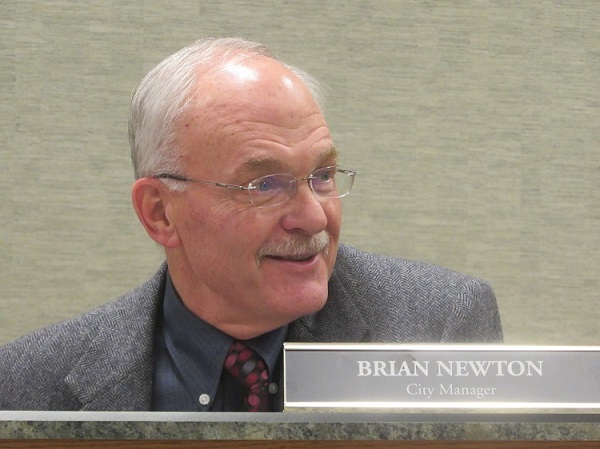 “This puts some of the burden of the cost normally always bore by the taxpayers back on the users,” Newton said. “So if you use the service, your insurance company pays for it. I think this is a good idea. I’d like to someday petition the county to bump that $500 up but I think this is a good start.”
The second and final reading of the ordinance will likely take place at the next Council meeting
Council also approved a change order with Fairchance Construction Company for the Fire Department Renovation project
“The change order for tonight, these items will be an actual change order, they will not come out of contingency funds,” Bridgeport Community Development Director Andrea Kerr said. “There are three, additional slab excavation, flood mitigation and additional security access controls for a total of $296,786.80.
“There are some contingency items that will be coming and that’s to replace existing doors and hardware, an ADA shower enclosure, increasing the poxy floor thickness and we added a door. That’s a total of $39,576.62 so that leaves $75,439.12 remaining in contingency for the Fire Department project.”
The second and final reading of an ordinance that will establish new rates for utility water customers took place during the unfinished business portion of the meeting. The new rates will go into effect in 45 days. 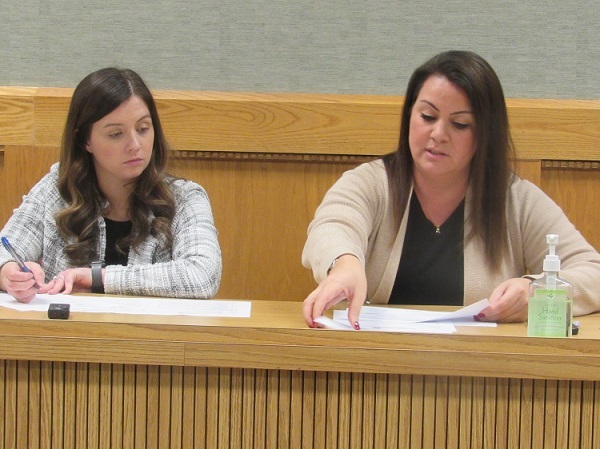 The rate increase is not arbitrary or to fix any problems in the Bridgeport system. Bridgeport is one of many municipalities and towns in Harrison County that purchase water from the Clarksburg Water Board, which recently passed a substantial rate hike as part of a $85.6 million upgrade.
Bridgeport customers will not see the impact of the rate increase until April, which is actually the bill for water usage in February. City officials said they would absorb the rate increase cost for the month of January.
The increase on the statewide average monthly usage of 3,500 gallons is 9.9 percent for residential customers, which comes out to an additional $3.10 per month. The increase is slightly lower for less usage and slightly higher for more usage. According to Michael D. Griffith, CPA, of Griffith & Associates, PLLC, the average Bridgeport customer uses slightly more than 3,500 gallons so the increase will likely be slightly higher.
The other rate increases are as follows and based on the state average usage and will see different increases based on less or more usage as well: Commercial will be 11.3 percent or $19.42 per month based on average usage of 21,400 gallons per month; public authority usage would see a 12.5 percent hike and a monthly increase of $36.32 per month based on average usage of 40,300 gallons per month; and industrial would see a 14.6 percent increase and a price spike of $107.96 per month based on an average usage rate of 119,900 gallons per month.
Council also approved the reappointment of Ryan Haws as a member of the Zoning Appeals Board for a term of three years that runs from Feb. 1 through Jan. 31, 2026. 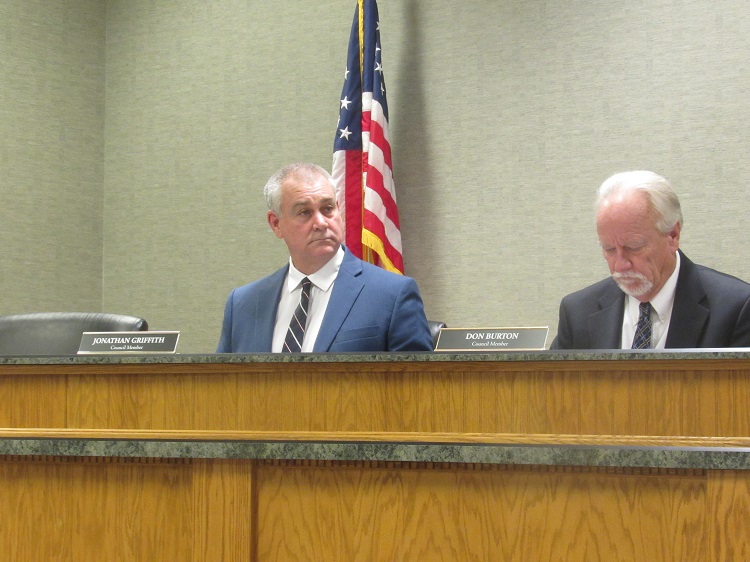 Carole Kinard and Stacey Randolph’s appointments as Ballot Commissioners for the June 13 municipal election were approved by Council.
Also in regard to the June 13 municipal election, Council approved a resolution, notice and order that puts the renewal of the excess levy on the ballot. The levy is in place until June, 2024 so its appearance on the ballot is for a five-year renewal period that would begin in June, 2024.
Council will appoint ballot commissioners for the June 13 municipal election and address another issue regarding that election as they consider and act on a resolution, notice and order that would put the renewal of the excess levy on the June 13 ballot.
In his City Manager’s report, Newton talked about an unlikely scenario that led to the City getting a new ambulance that is already in service.
“Ambulances are real tough,” Newton said. “We ordered one in 2021 and were hoping it would be delivered in 2022, it’s still not delivered.
“But in the meantime, the ambulance (Chief Hart) put into service today, a community backed out and luckily the supplier called us. Phil has had two in his budget, the supplier called and said, ‘Listen, I have one, if you want it, it’s yours.’ We took it.
During the time allowed at the end of the meeting for comments from the Council members, Councilman Don Burton said he has decided to run for re-election.
Monday’s meeting also marked the first for Bridgeport’s new City Clerk, Lauren Rogers. It was also just her second day on the job, as she started last Friday. More on Rogers in the upcoming days on Connect-Bridgeport. 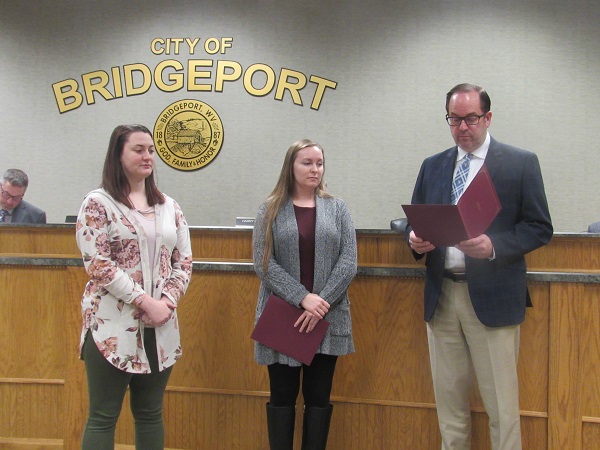 Representatives from Hope, Inc, were on hand for proclamations to support Human Trafficking Awareness & Prevention Month as well as Stalking Awareness Month.
Retired Pastor Mike Hopkins, from Simpson Baptist Church, provide the invocation prior to The Pledge of Allegiance at the start of the regular meeting.
Prior to the start of the regular session, there was a work session that centered around The Bridge Sports Complex. Part of the meeting was open, part of it was in executive session.
During the open portion, The Bridge General Manager Droo Callahan provided a six-month review and future plans. More on the information from Callahan and the work session in the upcoming days on Connect-Bridgeport.
Editor's Note: Top photo features Police Chief Mark Rogers (left), City Engineer Beth Fox (center) and Fire Chief Phil Hart (right). Second photo is of City Manager Brian Newton. Third photo shows new City Clerk Lauren Rogers (left) and Community Development Director Andrea Kerr (right). Fourth photo shows Councilmen Jon Griffith (left) and Don Burton (right). In the bottom photo, Mayor Andy Lang issues a proclamation to representatives fron Hope, Inc.