For Second Year in a Row, Annual Indians Steak Fry at its New Location and Tickets for Event are Scarce

It’s become as much a tradition with Bridgeport football as the running game. But as the running game showed a few years ago, changes sometimes take place and they work out.
Such is the case with the annual Bridgeport Indians Steak Fry. For the first time, 2018 saw the event move from its long-standing location to the Quality Machine Pavilion off of U.S. Route 50. And for anyone worried about the new venue, there was no need.
“It went great. It’s a beautiful facility and the improvements for us from a planning standpoint is much better. It has plumbing, restroom 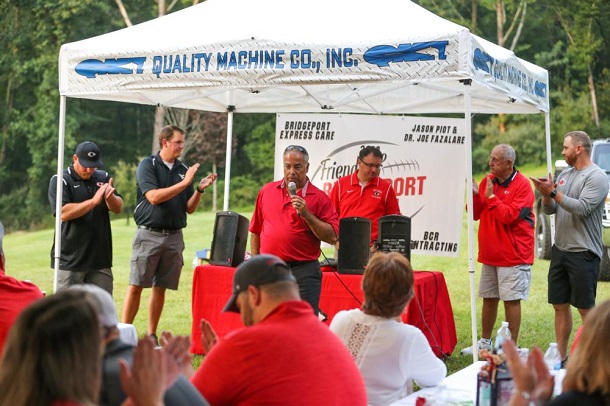 facilities and power,” said Travis Jones, the Indians radio play by play announcer who helps spearhead the event. “The biggest thing is that the pavilion provides permanent cover whether it’s raining, or the sun is shining. Even if it’s hot, there’s shade. We can seat 125 people under the pavilion and that’s our goal.”
The steak fry will take place August 24 at 6 p.m. right back at the same Quality Machine Pavilion. For those worried about finding it, you can log in the address “63 Quality Lane, Bridgeport, WV” into your GPS system or you can follow the signs directing you there along U.S. Route 50.
Along with the all-you-can-eat steak, chickens, sides, desserts and more, the event is the unofficial kickoff to the 2019 football season. Jones said there are dozens of regulars who attend each year to mingle with coaches, fellow fans and administrators.
“It’s really become a social event where you can talk to the administration and the coaches about the upcoming season. If you want to talk to the coaches about the Big 10 Conference, a particular opponent or football across the state you can,” said Jones. “It’s a great one-on- 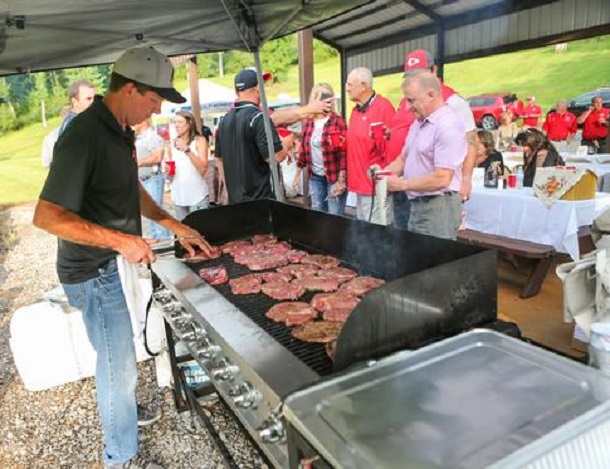 one opportunity to do that.”
One of the highlights is the “state of the program” address given by BHS Coach John Cole. He’ll talk about the team’s goals and expectations less than a week from the start of the season.
To take part, individuals need to contact Jones by phone or text at 304-625-1420. Tickets are $40 per person and include the aforementioned food at chances at door prizes. There will also be a silent auction that features Bridgeport apparel, a custom-made Bridgeport dart set, an Indians’ game-worn helmet lamp, custom tailgate games and more.
Jones said there is a limit on tickets sold. He added that the limit is close to be reached so ordering now may be of the essence. Tickets, he said, may not be available the day of the event as they have been in the past. 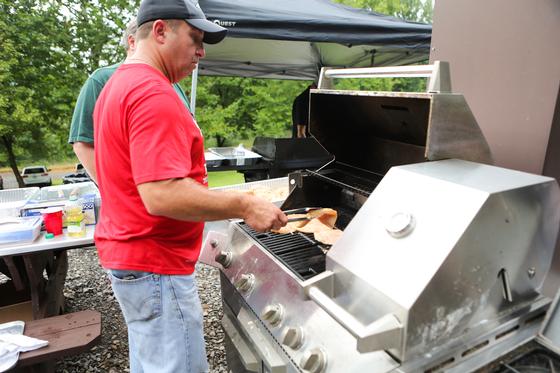 “We couldn’t do this without our sponsors and a lot of quality people in the community,” said Jones, who apologized if leaving anyone out.
Sponsors include Quality Machine, Delegate Ben Queen, Bridgeport Express Care, BCR Contracting, Jenkins Subaru-Hyundai, Dr. Fazzalare and Jason Piot.
“I also want to thank Chuck and Christian Marsh from Quality Machine for bending over backwards to help and lend us the facility,” said Jones.
The steaks are supplied by Young and Stout through Steve and Stephen Stout, while the chicken is courtesy of Nunzio Bonamico from Via Veneto. Pat Oliverio from Oliverio’s Ristorante donates the potatoes.
“It’s a community collaboration,” said Jones, “and it’s a great time.”
Editor's Note: Top photo shows Coach John Cole and his staff at last year's event, while the second photo shows some steaks being grilled and the bottom photo is of chicken being prepared. Photos by www.benqueenphotography.com.