It's Official: William Ihlenfeld Back as U.S. Attorney

By Connect-Bridgeport Staff on October 12, 2021

William J. Ihlenfeld, II has taken the oath of office to become the United States Attorney for the Northern District of West Virginia. Ihlenfeld was nominated by President Biden on August 10, 2021 and confirmed by the U.S. Senate on October 5, 2021. U.S. District Judge Thomas S. Kleeh administered the oath of office to U.S. Attorney Ihlenfeld today.
As U.S. Attorney, Ihlenfeld is the top-ranking federal law enforcement official in the Northern District of West Virginia, which includes offices in 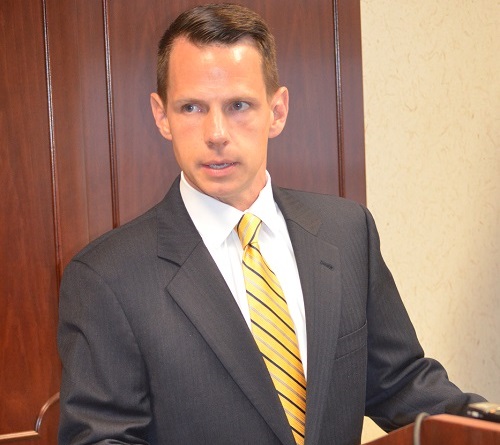 Wheeling, Martinsburg, Clarksburg, and Elkins. He oversees a staff of 53 employees, including 24 attorneys and 28 non-attorney support personnel. The office is responsible for prosecuting federal crimes in the district, including crimes related to terrorism, public corruption, child exploitation, firearms, and narcotics. The office also defends the United States in civil cases and collects debts owed to the United States.
Ihlenfeld’s career in the law has been punctuated by terms of public service. He previously served as the United States Attorney in the Northern District of West Virginia, from 2010 until 2016. Prior to that, he was a state prosecutor for thirteen years in Ohio County and Brooke County, including three years as a domestic violence prosecutor. Most recently, he was a member of the West Virginia Legislature.
During his first term as U.S. Attorney, Ihlenfeld investigated and prosecuted British banking giant HSBC for its failure to identify money laundering transactions by Mexican drug cartels and terror groups. He also helped to broker a $150 million settlement with the McKesson Corporation for its filling of suspicious orders of painkillers from West Virginia pharmacies.
The prevention and prosecution of public corruption has been a priority of Ihlenfeld throughout his career and will continue to be during his second term as U.S. Attorney.
Ihlenfeld has been honored by the Drug Enforcement Administration, the White House Office of National Drug Control Policy, and the FBI Citizens Academy for his efforts to address substance abuse.
He served for many years as an executive board member of the West Virginia Coalition Against Domestic Violence as well as the Upper Ohio Valley Sexual Assault Help Center.
Ihlenfeld graduated with honors from Ohio University and earned his law degree from West Virginia University.