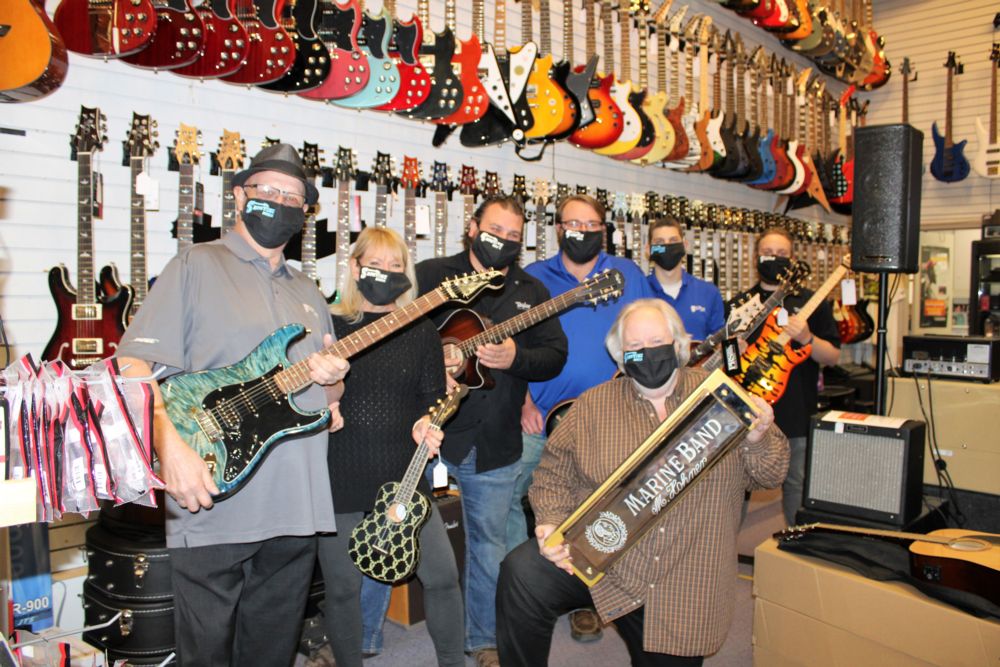 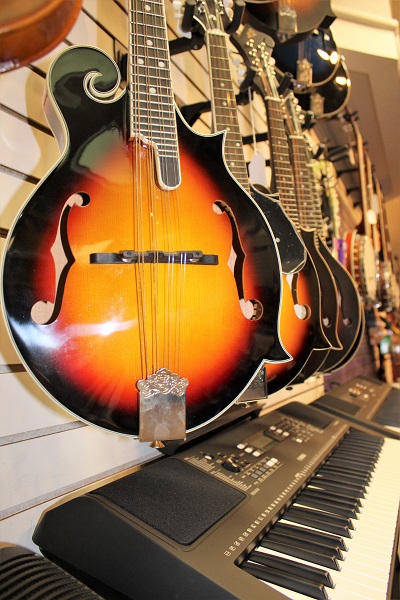 Showtime Music has been Harry Gillum’s livelihood for nearly 30 years. He can’t imagine the volume of pianos, guitars, drumsticks, sheet music that have sold through his business.
But the Bridgeport businessman said it’s not just about the sale.
“It’s the excitement they have when they come in and purchase an instrument – not knowing how to play it,” Gillum said. “Then they come in later and show you their million-dollar smile, along with their new song.”
He remembers his own infatuation with the world of music; a notable experience and one which inspired his longtime profession which culminated with the ownership of two stores; one at the Meadowbrook Mall.
Growing up in Beckley, he began playing guitar at a young age and went to work at the local music store at age 15.
“After graduation, I decided to stay in the music business because I saw the pleasure it brought to people,” he said.
Gillum worked his way up in the business; traveling to establish stores for the Pied Piper retail music chain and gaining valuable retail knowledge.
“Then in 1990, I said to my wife, if I’m going to get into the music business, I better do it before I turn 35,” he said. “I started doing research to find areas within the state of West Virginia that were in need of a service in the music industry.”
After consideration of various locations, they settled upon Bridgeport, choosing an 1,100-square-foot store at Meadowbrook Mall.
“We originally opened as a keyboard center,” Gillum said. “There were no keyboard dealers to speak of from Pittsburgh to Charleston.”
After selling Yamaha, Clavinova and Baldwin brands for less than a year, he felt for certain there was a demand for other musical products. 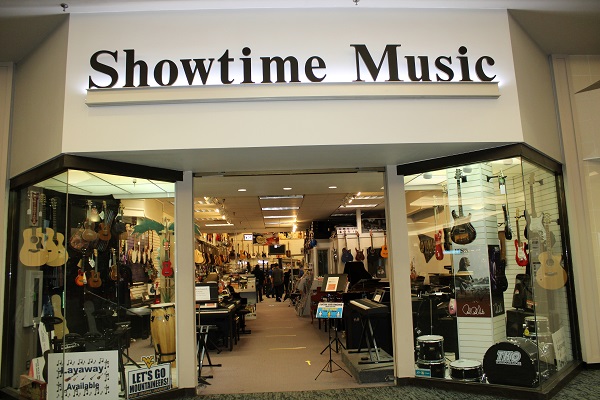 “So, in 1992, we opened up a 3,000-foot store at the mall, taking on a major guitar manufacturer and drum companies and we also expanded our print music department,” Gillum said. “We put in studios and taught private lessons.”
As the years rolled by, Gillum and his longtime staff have continually added inventory and a long list of brands including Squire, Jackson, Gretsch, Paul Reed Smith, Epiphone, Kramer, Sterling by Music Man, Yamaha, Ovation, Teton, Schecter, Taylor, Eddy Finn, Bose, Peavey and Fender.
Showtime Music is the only authorized

Fender dealer in Central West Virginia and among the brand’s top 250 dealers in the U.S. It was that honor which earned Gillum tickets to a private Van Halen concert, where he purchased two of his most prized guitars.
“In 2007, Fender Special Custom Shop Division worked with Eddie Van Halen to hand-build a guitar,” he said. “They started out with only 300 in the world and I actually bought one out of his hands. I really bought two of them and the one that he played is on display at our store in a glass showcase under lock and key, signed by Van Halen and with paperwork of authenticity.”
Showtime Music met another demand: Specializing in church sound and custom design systems.
“We install systems and train people how to use them,” Gillum said. “It’s an integral part of our business and a side almost no one sees. We travel up to 600 miles and cover five states.”
Gillum and his staff have further developed their sound and video business to include sporting and other special events.
In 2000, Gillum purchased the store at Beckley’s Crossroads Mall, where he worked as a teenager and young adult.
“In 2009, we built a brand-new store at that mall, a 4,200-square-foot store,” he said.
A 3,000-square foot warehouse at Meadowbrook Mall stocks inventory for both stores.
Gillum has sold his share of clarinets, trumpets and flutes, but it’s the instruments which people generally play lifelong that are the stars of Showtime Music.
There have been trends.
“Probably the biggest has been the acoustic furniture-style piano,” Gillum said. “It was the ultimate to own and place in the living room.”
Though the baby grand is still in demand, the piano focus has turned to digital products.
“With technology, prices basically come down. When you’re building an acoustic piano, you can’t bring the cost down because it is so labor intensive,” he said.
Though the violin, base and ukulele all have their following, the guitar has been a lasting craze. 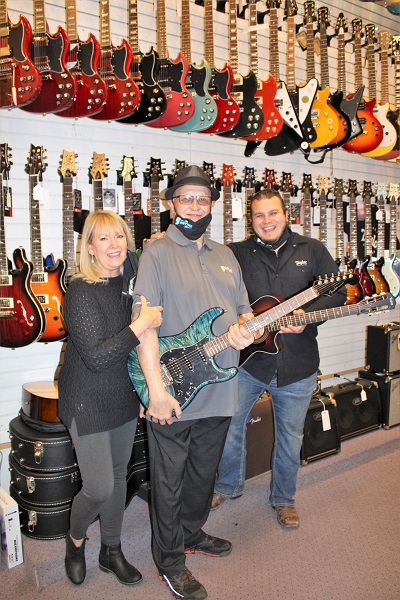 “Everyone wants to learn to play guitar and record in a home studio,” Gillum said. “When COVID hit and our retail store temporarily closed, we were really busy shipping recording devices and guitars all over the country. We received comments from customers saying they were stuck at home and learning to play and record.”
Showtime Music’s ecommerce Web site, which began in 1995, has also been a major part of the business.
Gillum’s wife Brenda works in the business, keeping the books. Both have encountered cancer and successfully fought the fight. Harry was diagnosed two years ago with stage 4 pancreatic/lung cancer and has beaten the odds. The couple’s faith – and the prayers of the churches they have serviced – are to credit for their health and positive attitudes.
Their three sons Christopher, Nicholas and Jonathan, have all worked in the business. Jonathan has in recent years been taking the reins.
The Showtime Music staff has also become like family. They include longtime manager Randy Franklin and head music instructor David Zinn, as well as John Bonnett, sound engineer and technician, who also does string instrument repair and restoration. At his Beckley location, Gillum depends upon Bill Knight, store manager and sound engineer.
Through the years, Showtime Music has taught over 100,000 private lessons and held annual recitals for students, pumped out about 400 guitars every holiday season and overall serviced about 265,000 households in multiple states.
The business has completed various community service projects. Perhaps their favorite is Guitars for Vets. In coordination with the VA Medical Center, guitars and lessons were donated to post traumatic stress syndrome victims.That same sense of accomplishment came shining through, Gillum said.
Gillum is the founding father and past president of the Independent Music Store Owners and was in recent years featured in the National Music Merchants Association trade magazine. 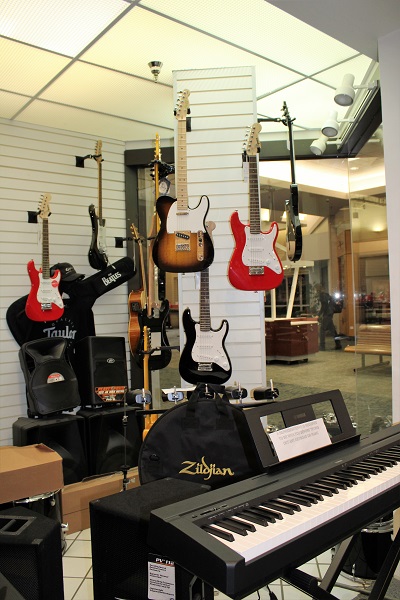 Jonathan Gillum said he would add humility to his father’s traits. While working in the store, he keeps a low profile, helping customers but not introducing himself as the owner.
“That’s because in his mind, it takes not just one person, but the entire workforce,” Jonathan said.
Showtime Music is among the top 100 music dealers in the world.
It’s been an amazing ride; one based on the world’s most universal language, Harry Gillum said.
“I think it’s safe to say we are providing a service that’s needed,” he said. “We’ve stood by for 30 years and hopefully we’ll stand another 30 years after I’m gone, and the next generation is there. As long as they understand and take care of the needs and desires of the customers – and put the dollar bill aside – they will be successful.”
Editor's Note: Pictured top are Harry Gillum, Brenda Gillum, Jonathan Gillum, Randy Franklin (kneeling), John Bonnett, Andrew Smith and Tyler Bunnell. Pictured just above are Harry, Brenda and Jonathan Gillum and below are Bill Knight, Dave Albright and Steve Whitner at Gillum's Showtime Music store at Crossroads Mall in Mount Hope, WV. Other photos were taken at the Meadowbrook Mall store. 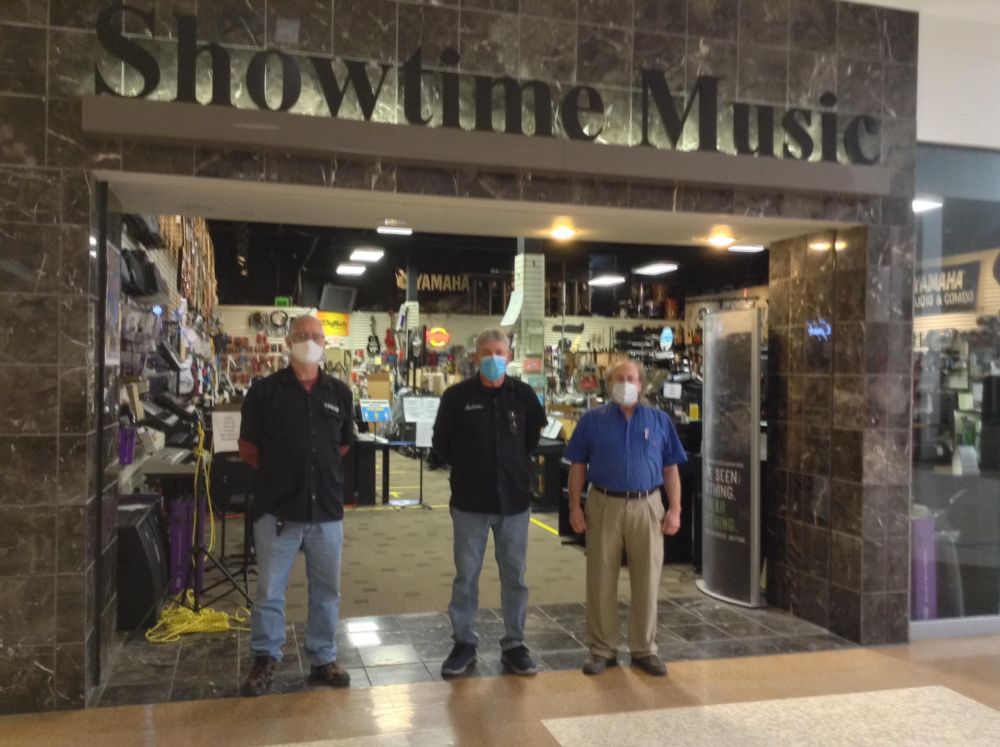