By Connect-Bridgeport Staff on December 13, 2019

The final MetroNews High School Football Power Index poll is out for all three classifications. And to likely no one’s surprise Bridgeport High School finishes the year as the top-ranked team in Class AA.
It marks the first time this season the Indians have been ranked number one in the poll. From preseason to the end of the regular season, the 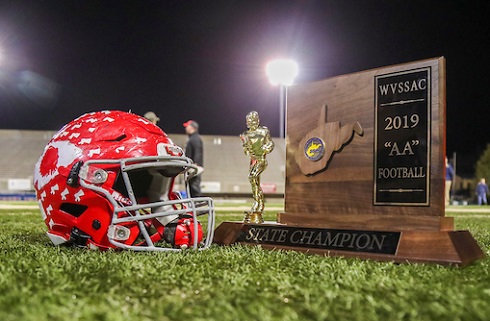 Tribe was ranked no higher than third and were ranked as low as fifth at one part of the year.
Following Bridgeport’s postseason run, the Indians went to the top of the heap. BHS received all 18 first place votes in a panel of statewide radio broadcasters and sports writers.
The Indians finished the year 13-1. The final win was by a 21-14 score over Bluefield in the state title game.
The Beavers, 12-2, finished second. The loss to Bridgeport was the only setback this season to a West Virginia squad.
Fairmont Senior, the only team to beat Bridgeport this season, finished third at 13-1. Oak Glen, the team the Tribe beat to get to the finals, closed the year at 12-1 with its only loss to the Indians and at No. 4.
Poca rounded out the top five. The Dots finished the year at 11-1.
Several Bridgeport foes were in the top 10, including three of the top four foes in the top five. Keyser ended the year at No. 6, Mingo Central came in at No. 7 and North Marion finished at No. 10. The Tribe finished 5-1 against the top 10 this year.
Liberty Harrison was in the “also receiving votes” portion of the poll.
Click HERE for the entire top 10 in all three classifications.
Editor's Note: Photo by www.benqueenphotography.com.