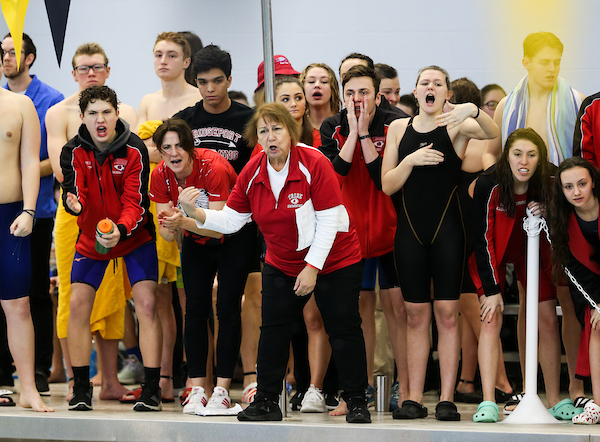 The two biggest ingredients needed to go after a team title in swimming are depth and strong relays.
The Bridgeport boys more than proved they have the depth on Day 2 of the state swim meet Friday at the Mylan Park Aquatic Center in Morgantown but unfortunately the loss of a relay team in Thursday’s preliminaries cost them a second consecutive state championship as they finished as the runner-up to George Washington.
Not that the Indians didn’t make it interesting though as they basically gave the rest of the state a 32-point lead after the 200 medley relay team — which had the top qualifying time and would have been heavy favorites to win the state title on Friday — was disqualified for an early exchange on the fourth leg. The Indians caught everybody, except the Patriots and came within eight of them with the final team scores being 180-172 in favor of GW.
On the girls side, Bridgeport finished sixth with 104 points. George Washington made it a clean sweep by taking the girls team title with 206 points. Parkersburg was second with 166 and followed by Wheeling Park (134), Buckhannon-Upshur (127) and Morgantown (113).
“To give up a relay team and get within eight that’s pretty impressive,” Bridgeport coach Jan Grisso said. “It just goes to show what type of boys we have. I’m proud of them. I’m proud of the girls too. We had a lot of boys and girls get their personal bests or lower their times from yesterday.”
Sophomore Randy Keener picked up two individual state titles and broke two more of Michael Walker’s school records along the way and wasn’t too far off the state meet record in either. 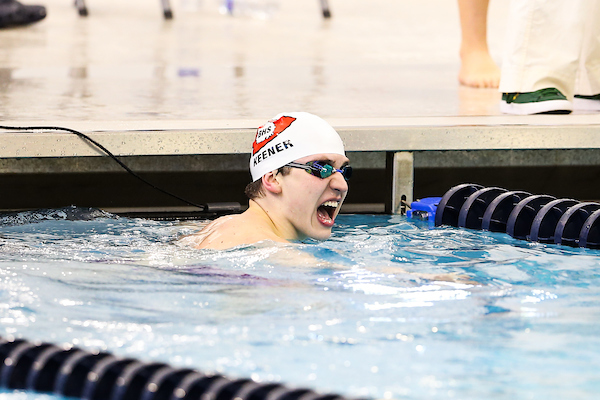 Keener’s day began by dominating the 200 IM field with a winning time of 1:54.43, beating second place by nearly 10 seconds.  He had a personal record time in the 100 backstroke, taking the state championship at 50.93 (six seconds faster than the runner-up). The state meet record in that event is 50.86.
“The IM was way faster than I thought,” Keener said. “That felt really good. The backstroke, I felt a little off and I didn’t go out as fast as I wanted to but I had a really good third turn. That was my all-time best time ever so I was pretty excited about that.
“I actually broke all three records that Michael held this year, the 200 IM, the 500 and 100 back. It’s just fun going fast.”
Keener was also part of the state champion 400 freestyle relay team joining Phillip Malenich, Mason Titchenal and Marcel Rodriguez. They finished with a blistering time of 3:21.45.
The girls 200 medley relay team of Cheyanne Rohde, Lilly Madden, Darian Spencer and Cheri Signorelli kicked off the day for the Indians and they finished fifth with a time of 1:59.07. Parkersburg set a new state record in the event with a time of 1:48.84, breaking the mark they sat on Friday in the preliminaries. 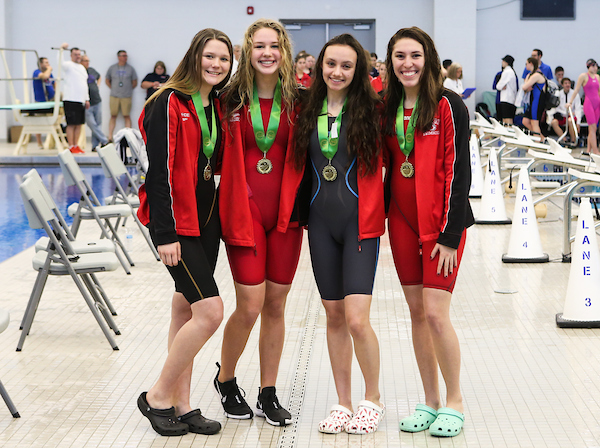 In the 200 free style, Reed Smith finished 12th with a time of 1:59.43.
Marra Johnson finished sixth in the 200 IM with a time of 2:17.79, improving on her preliminary time of 2:18.01 and later placed fourth in the 100 breaststroke with a time of 1:10.10, improving on her preliminary time of 1:10.13.
“I dropped my times in both and that’s all you can ask for is to get better every time you compete,” Johnson said.  “I was a little sad I didn’t get third in the breaststroke but my time was better than yesterday so I can’t really complain about it.”
In addition to Keener’s strong performance in the 200 IM, the Indians also picked up points from Luke Pinti’s fifth-place time of 2:10.97 and Reese Allen’s 12th place time of 2:18.23.
Later in the day, Pinti picked up a second-place finish in the 100 breaststroke with a time of 1:00.57, setting a PR for the second consecutive day following his 1:00.71 in preliminaries.
“That felt great to get a PR yesterday and then go out and get another today,” Pinti said.  “I think after our relay team got DQ’d on Thursday, we knew we had to really work harder in our individuals and our other two relays today. I’m really proud of everyone. A lot of us dropped times today.” 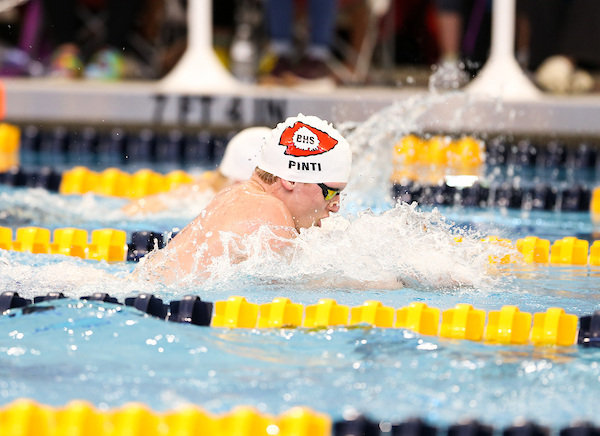 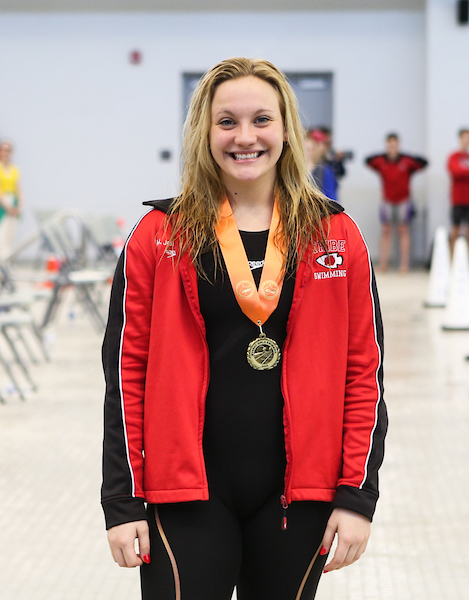 Rounding out the scoring for BHS was an eighth-place finish in the girls 400 free relay as Johnson, Hope Rieser, Lacaria and Spencer swam a time of 3:56.26.
Grisso was honored during the state meet with the National Federation Coaches Association 2019 Swim Coach of the Year Award.
Editor's Note: Top photo features a group of Bridgeport swimmers and coach Jan Grisso cheering on a teammate. Second photo is of Randy Keener after the 200 IM. Third photo is of the girls 200 medley relay team of Cheyanne Rohde, Lilly Madden, Darian Spencer and Cheri Signorelli. Fourth photo is of Luke Pinti in the 100 breaststroke and the final photo is of Marra Johnson receiving a medal for placing in one of her individual events. All photos by Joey Signorelli for www.benqueenphotography.com