Bridgeport Moves to 3-0 with 35-7 Win against Liberty

When the game concluded this evening at John Mazzei and James L. Reaser Field in Clarksburg, the scoreboard showed a 35-7 victory by Bridgeport against homestanding Liberty. And while the offense was big in helping the Tribe coast to the win, it was the defense that slammed the door shut on the Mountaineers.
Thanks to a potent defensive attack that yielded just 69 rushing yards to an LHS squad determined to run the ball, the Indians ran their record to 3-0. The Mountaineers fell to 2-1. 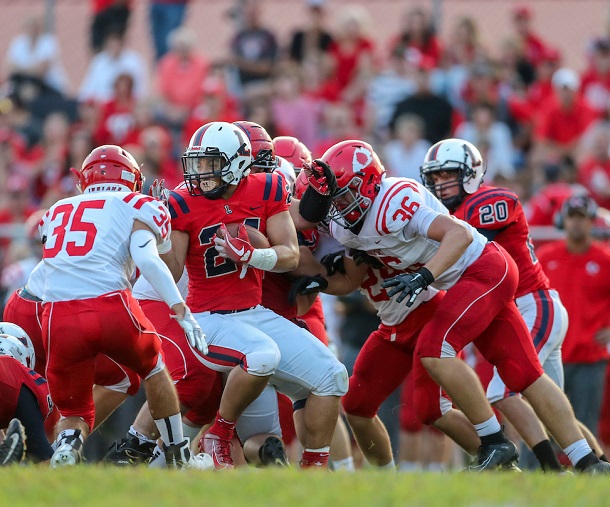 The win by Bridgeport sets up a battle of Class AAA top 3 teams next Thursday at Wayne Jamison Field as the undefeated No. 3 Indians will host undefeated and No. 2 Fairmont Senior. Game time is set for 7 p.m.
Bridgeport pulled away in the second half to turn a game that was far from determined late in the first half to one with little doubt about the outcome as the final two quarters wore on. The Indians were up 28-0 in the fourth and essentially put the game to bed, but that didn’t seem like it was going to be the case in the game’s earlier stages.
In fact, the first half had the potential to leave the Liberty faithful in a frenzy as halftime arrived. Instead, Bridgeport managed to take a two-touchdown advantage into the locker room thanks to a pair of first half touchdowns.
After the Mountaineers forced a three-and-out on Bridgeport’s first offensive possession, the Tribe went to work on their second drive. And it was exactly a repeat of most of the Tribe’s other scoring drives this season.
Following a nice punt return by Sam Romano to the Indians’ 47-yard line, the Tribe would embark on a 15-play drive to cover the remaining 53 yards. 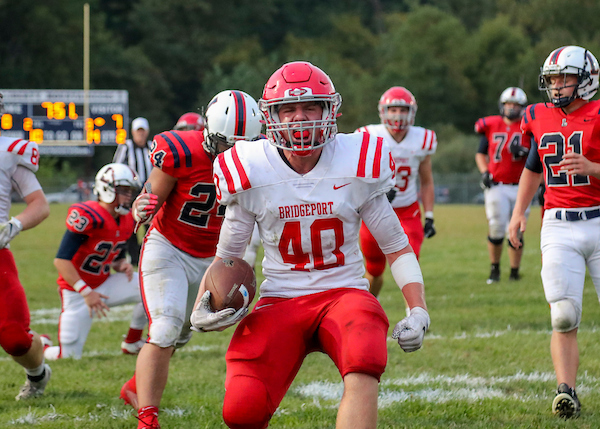 Bridgeport completed a pair of fourth-down conversions – both needing just one yard – and Trey Pancake delivered on both times.
Pancake then sealed a drive that featured only one double figure run – a 12-yard keeper by Devin Vandergrift. The senior fullback went off left tackle from one yard out for the score with 10:42 to go before halftime. The first of five successful Austin Springer point-after kicks made it 7-0 Bridgeport early in the second quarter.
The next drive Bridgeport would put together would not need nearly as many plays or time off the clock. Instead, after Romano set up the Tribe again with a solid punt return to the Liberty 45, BHS would need just three plays to score.
“We haven’t had (field position) all year,” said BHS Coach John Cole. “… The first two games we had excellent kickers we had to deal with and our offense that doesn’t need to be pinned back was pinned back. Sam did a good job and the punt return team did a decent job and that really helped.” 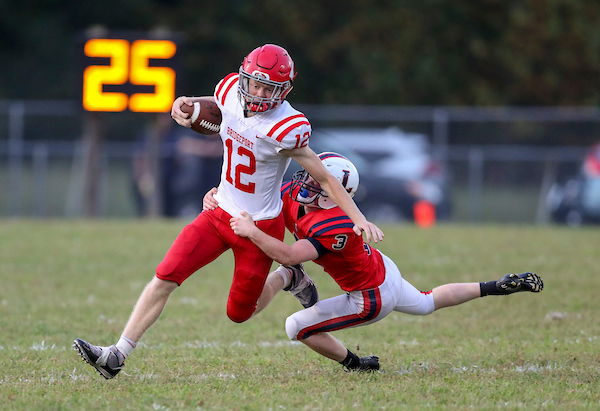 With sophomore quarterback Cam Cole under center, the Tribe opted to run the QB keeper on their first two plays. The strategy worked as Cole’s first run was for 18 yards and his second one was for 13.
As the defense focused on Cole, a quick handoff to Pancake paid immediate dividends. Pancake burst through the line, made a quick cut to the right where he shook off a defender and went the final 14 yards for the score. The point-after made it 14-0 with 7:50 to go in the second.
Despite the sudden turn in the game’s score, Liberty wasn’t rattled. Instead, the Tribe went to work and appeared to be ready to be able to cut the score in half. Starting at their own 32, the Mountaineers seemed headed for a three-and-out, when Coach A.J. Harman opted to go for it facing a fourth-and-two at their own 40. The gamble became even bigger following a false start penalty as Harman rolled the dice to go for it needing seven yards on fourth down from the LHS 35.
The gamble paid off. Quarterback Noah Leggett connected with Eli Norman for a 15-yard pass to breathe life back into the hopes of the hosts. 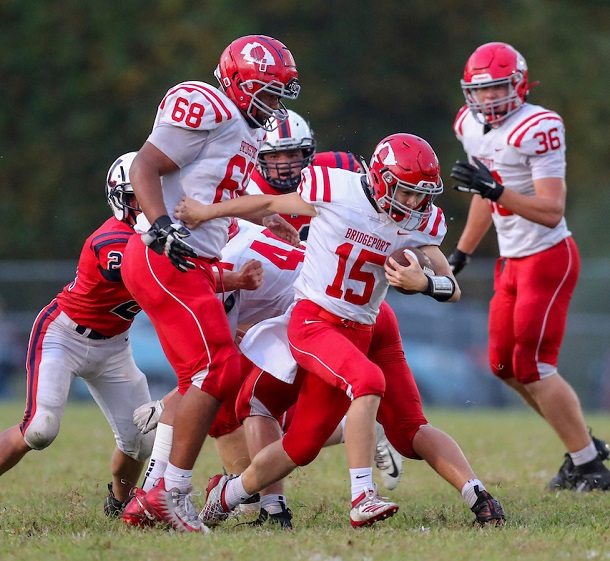 Liberty also modified its offense from the stick-I to a passing attack on the surge. And on this drive the sudden shift to an unbalanced offense with an attack from the slot worked.
“Coach Harman always has something for us, and he certainly did as it was something we didn’t practice against,” said Cole. “We just didn’t adjust well, and they marched down the field on us. The quarterback made some nice throws, the kids executed and caught the football and we didn’t a pass rush at all.”
After the initial pass, the Mountaineers would pass on four of their next six plays – completing all of them – to get the ball to the Bridgeport two after Leggett hit Norman cutting in from the left for 13 yards. With a first-and-goal from the two, Liberty seemed to be in good position to make the first half interesting as the clock was winding down.
Instead, the Bridgeport defense had other ideas. Two straight running plays up the middle went nowhere, and a third-down quarterback keep resulted in a four-yard loss.
Following a Liberty timeout, and less than 10 seconds to play in the second quarter, Bridgeport’s defense stiffened yet again. This time, Pancake and J.T. Muller broke the line and forced a pass that was nowhere near the target. With just a couple of seconds remaining, Bridgeport took a knee and a 14-0 lead into the half. 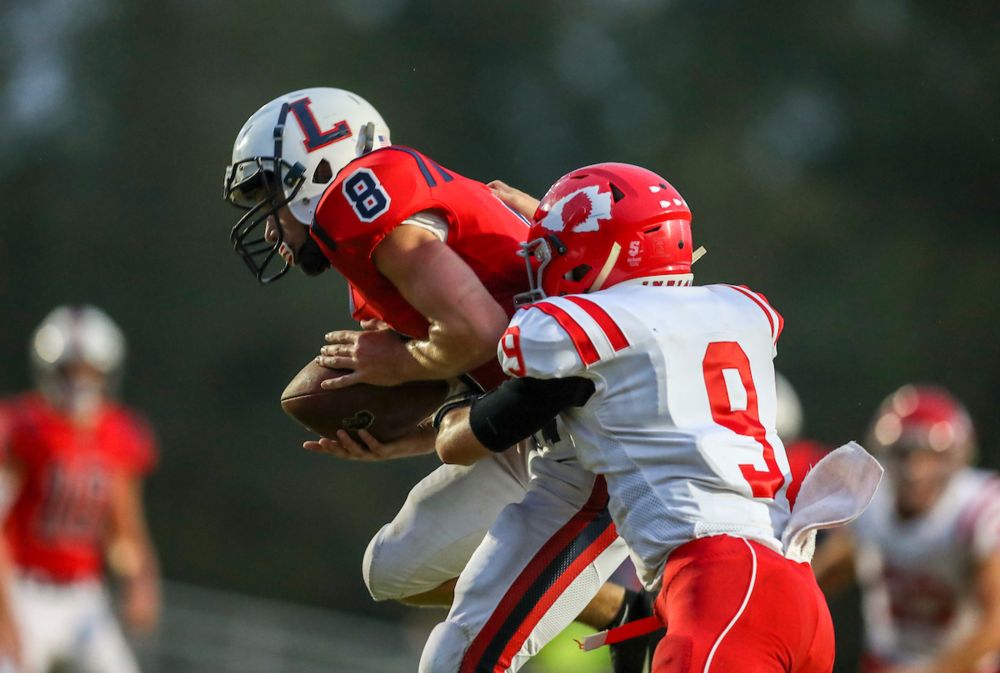 “That would have brought the game to within one score. That was big,” said Cole of the stand.
Statistically, the game was close in the first two quarters. Bridgeport finished with 93 yards of offense and Liberty had 86. All of Bridgeport’s offense was on the ground while Liberty had 58 of its yards through the air.
Cole led the rushing attack with two carries for 31 yards, while Pancake had four carries for 30 yards. Leggett was 7-of-10 passing for the 58 yards
The yardage statistic would be lopsided in the second half. And Bridgeport wasted little time putting things in its favor.
After the Tribe stopped Liberty on three plays to start the third quarter, the Indians took advantage of yet another short field following a punt that went just 15 yards and gave BHS possession of the ball at the Liberty 40.
Following a first down-play for no gain, Devin Vandergrift kept the ball and went to the left and raced 27 yards for a first down. Pancake 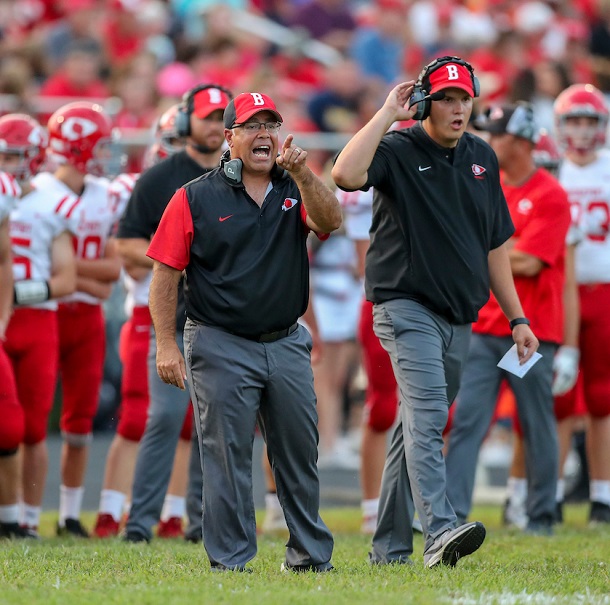 followed that with a 12-yard run to the one and then Vandergrift went untouched up the gut for a touchdown with 9:22 on the third quarter clock.
The point-after made it 21-0 Bridgeport.
Bridgeport looked ready to put the game away late in the third but saw a drive that made it to the Liberty 3 come up short thanks to a fumble. LHS moved the ball to near midfield but returned the favor with a fumble of its own and Tribe lineman Michael Watkins pounced on it to give his team the ball at the Mountaineer 48.
Six plays later, Cole got his first varsity touchdown as he scooted in from 18 yards after holding the ball in the gut of tailback Brian Henderson until the middle of the field opened for him. Another Springer point-after kick made it 28-0 with 6:35 to play.
“Cam’s an athlete. We know he’s an athlete and one of the better athletes on our team, but he’s a sophomore,” said Cole. “I don’t know how much he weighs, but it’s not very much and that’s a bit of a concern. When you have an athlete that has that kind of athleticism, sooner or later that cream rises, and you’ve got to do what you’ve got to do. He’ll play a lot of football for us on both sides of the ball.”
Liberty’s lone offensive score would come on the ensuing kickoff. Norman took the kick at his own 10 and raced full throttle down the right sideline for a 90-yard kickoff return. Mason Conrad’s point-after kick made it 28-7 at the 6:20 mark.
Any hopes of a Liberty rally were dashed quickly. Starting again in Liberty territory, Bridgeport needed just five plays to find the end zone. Muller did the honors as he ran to the right side and then outraced the Liberty defense to the end zone. Springer’s PAT at the 3:31 mark put BHS up 35-7 and were the game’s final points.
“Give credit to Liberty. A.J. knows how to play us,” said Cole. “Those guys came downhill; you can ask our players … They did a heck of a job on defense (particularly) in the first half.”
Bridgeport would finish with 312 yards of offense with 279 of it coming on the ground. Cole led the way with 12 carries for 79 yards, while Pancake finished with 11 rushes for 70 yards.
The Mountaineers finished with 146 yards of offense. No Liberty back ran for more than 19 yards. Leggett finished 10-of-18 for 77 yards passing with Norman leading the way with three receptions for 37 yards.
Liberty will look to bounce back next Friday. The Mountaineers play host to Philip Barbour.
Editor's Note: Top photo shows Carson Winkie (36) and Sam Drake (35) putting the brakes on a Liberty runner In the second photo, Trey Pancake celebrates the first of two first half touchdowns, while the third photo shows Sam Romano moving the ball up field on one of several solid punt returns that put BHS in good field position. In the fourth picture, Cameron Cole (15) breaks loose for some of his game-high rushing yardage. In the fourth photo, Devin Vandergrift works to bring Liberty's Eli Norman to the ground on one of his three receptions. Bottom photo shows Coach John Cole making a point to his team on the field. Photos by Ben Queen and Joey Signorelli of www.benqueenphotography.com.