Pressure squared off with Austin Springer this evening. Pressure never had a chance.
The junior kicker for Bridgeport, forced to attempt his first varsity career field goal in overtime against Morgantown with the game on the line, didn’t flinch. Instead, he drilled a 30-yard field goal through the uprights with yardage to spare to cap a miraculous comeback for the Indians. 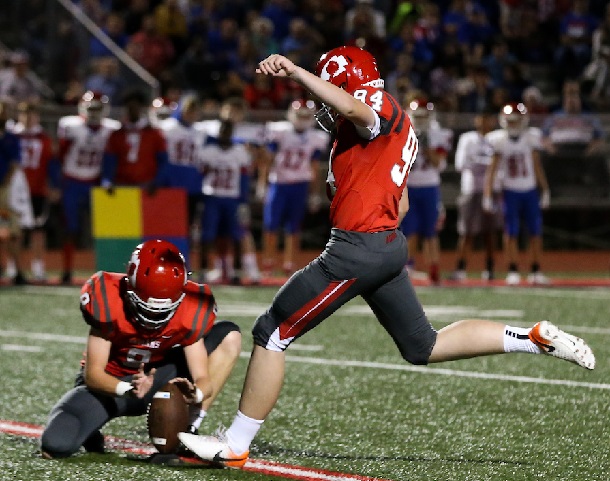 Long before Springer emerged from the mob of teammates swarming him, the scoreboard showed the Indians had managed to take a 17-14 win against the Class AAA Mohigans at Wayne Jamison Field.
The kick was the final nail in the coffin in a game where the Indians seemed to be the one that would be buried. Instead, the Tribe rallied from a 14-0 halftime deficit to get the win. And it culminated on the kick by Springer, who essentially missed last year with a hip injury.
“Last year was a bummer, but I am glad I came back; especially after tonight,” said Springer with the hint of a smile.
As for the kick, Springer said he didn’t feel pressured. Instead, he pointed to nailing two extra points earlier in the game that put BHS in position to force overtime. 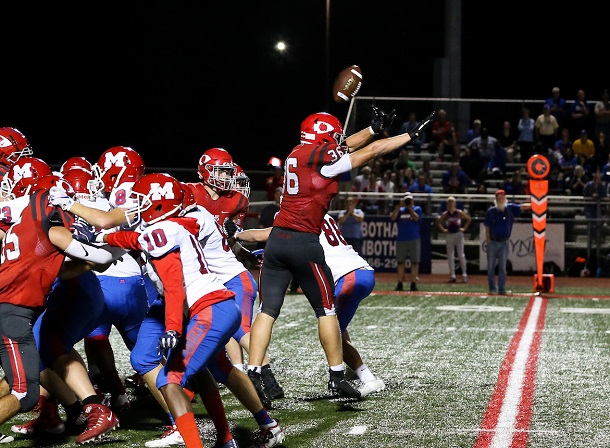 “I already had gotten a couple of kicks in. With the field goal, I was just making sure I stayed straight and kept my head down to try and kick it down the middle. That’s what I did,” said Springer. “That was a nice feeling, but there really was no pressure. Pressure doesn’t bother me, and you have to have that attitude as a kicker.”
Coach John Cole was thrilled with the kick as well.
“We had about four or five yards (on fourth down) to get and (the coaches) told me he had been kicking good in warmups and has been kicking good in practice. I felt good in allowing our line, because of the confidence I had in them, to block for him and he put it through.”
The Indians seemed like the team that was through. Not only were they down 14-0 at the half, but they had been largely dominated and failed to take advantage of three first half Morgantown turnovers. 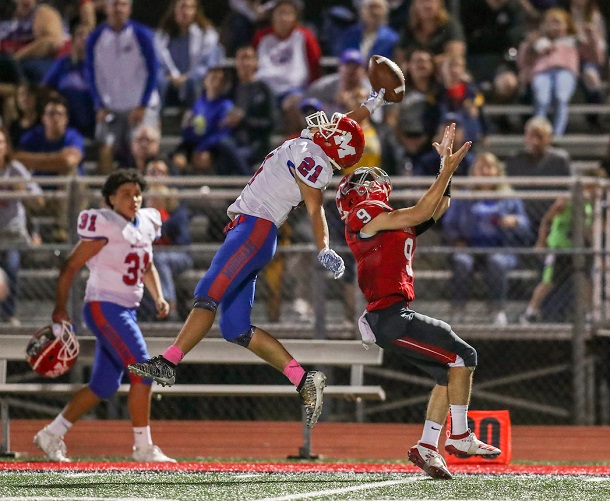 After the half, however, the game turned. And it turned in the manner the BHS script demanded.
With an offense that is geared with ball control due to a lack of what Cole calls “a home run hitter like Jake Bowen,” the Indians got the drive they needed to start the second half. Bridgeport started the third quarter with an 18-play, 80-yard drive that ate up all but 2:34 of the third quarter clock.
“That drive ended up setting the tone for the game,” said Cole. “Add to that the fact the defense refused to give up and you get a win and now we’ve given ourselves an opportunity to have a good year. Hopefully, they’ll take advantage of it.”
Brian Henderson, who had another blue-collar contest with 27 carries for 125 yards, scored his only touchdown of the night to cap the surge. The senior went off left tackle for a four-yard score on a third-and-goal play that made it 14-7 after Springer’s point-after kick. 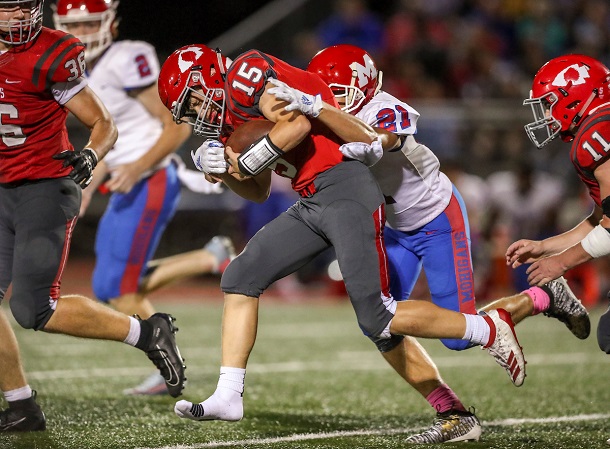 “Brian’s another senior that’s been here for three years that wants to win,” said Cole. “You saw that in bunches from him tonight.”
Morgantown managed just four plays in the third quarter of a drive that carried two more plays into the fourth before John McConnell was called on to punt. And his punt appeared to be really bad news for Bridgeport.
The ball bounced at the 25-yard line and rolled down to the BHS 2. With 11:05 left to play, Bridgeport had to go 98 yards to have a chance to tie. That’s exactly what they did.
Fifteen plays later, Trey Pancake burst through the middle of the line from 15 yards out to score with 6:18 left in the game. Springer’s point-after kick was true, and the game was knotted up.
Morgantown didn’t let the comeback rattle them and went to work. Starting at their own 38, the Mohigans marched all the way to the 19 of 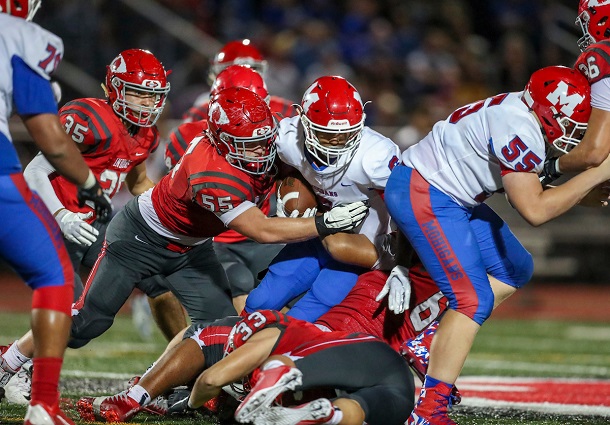 the Tribe to set up for a field goal try from 36 yards out with 1:46 to play.
The kick never made it to the line of scrimmage. Instead, Carson Winkie burst through and batted it down. Cameron Cole picked it up and returned it to the Morgantown 48, but BHS would end up fumbling it late to set the stage for overtime.
Unfortunately for the visitors from Monongalia County, Winkie’s maneuver was a harbinger of things to come.
In overtime, Morgantown took the first possession and was unable to move the ball and had to settle for yet another field goal try. This time, the try was from 33 yards out and – yet again – Winkie barreled through to block it.
“I don’t get through that line without (defensive lineman) Michael Watkins,” said Winkie. “He just plowed a hole there and he did the same at the end (of regulation). The hole was there, and I knew just to put my hands up and got there.” 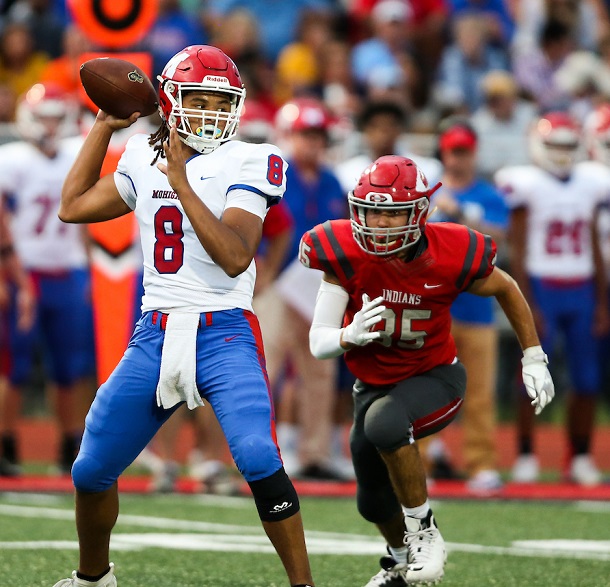 When he did, he put the Indians in position to win the game.
“Coach (Adam) King had a little plan devised and it worked,” said Cole of the Watkins-Winkie combination. “Carson is a kid that’s played three years, he wants to win really bad and he’s the type that finds a way to make plays.”
Morgantown managed just 67 yards of offense in the second half with 214 of that coming on the ground. Quinn Thompson led the way with 122 yards on 18 carries with two touchdowns.
Bridgeport finished with 240 yards of offense, including 232 of that total coming by way of the ground game. Incredibly, the Tribe barely got 50 yards of offense in the first two quarters.
Plays were hard to come by in the first half. In fact, the Indians found themselves struggling to do just about anything offensively despite the defense forcing more than their share of turnovers. Eventually, even the defense came up short.
After a scoreless first quarter, Morgantown began to assert itself. And its first scoring drive came after Bridgeport’s best opportunity to score in the first half arrived in the first quarter. 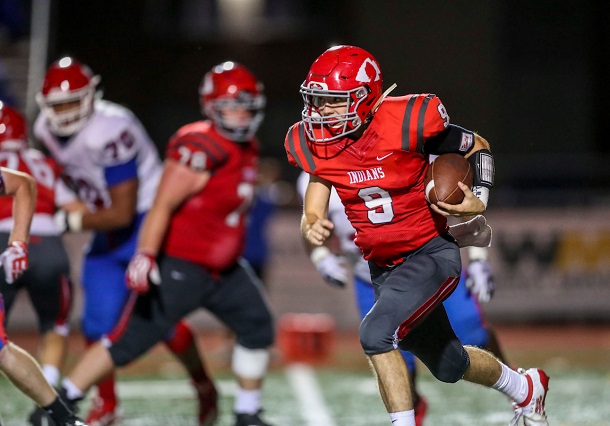 With 4:56 in the first, Morgantown’s second drive was going nowhere when the visitors fumbled the ball away. Pancake pounced on it and the Tribe had the ball at the Mohigan 32.
The Tribe’s first play would prove to be problematic as a fumble on the snap led to a two-yard loss and put the Indians behind the sticks. The Indians eventually got it to fourth down and needed four yards to keep the drive alive.
Henderson did all he could against a massive defensive line of MHS. Unfortunately, the run was inches short of the stick and Morgantown would take over and start the first of what would be two scoring drives.
Morgantown would start at its own 23 and need 11 plays to go the distance for the first score of the game. And it came on fourth down.
Needing six yards and at the Bridgeport 34, quarterback Cam Rice lofted a pass down the left sideline to Preston Fox who hauled it in over the outstretched arms of the Bridgeport defense. The first of two successful point-after kicks by McConnell made it 7-0 with 11:17 on 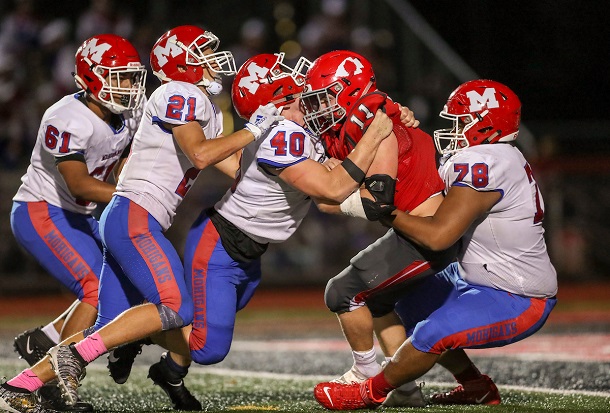 the second quarter clock.
Bridgeport managed just one first down on its next drive before giving the ball back to its opponent. And the guests went right back to work.
This time, the Mohigans started at their own 35 and would use 10 plays to get back in for six. Morgantown went exclusively to its ground game and ended it on a third-and-goal play from the BHS three when Rice bulled in the remaining distance behind his offensive line for what turned into a 14-0 lead with 4:24 to go.
The two teams ended the half exchanging interceptions. Bridgeport managed two picks in the final four minutes as Devin Vandergrift managed to get both – including one tipped by Elijah Smith. Vandergrift threw the other one when BHS ventured as far as the Morgantown 40 with under a minute to play before halftime. 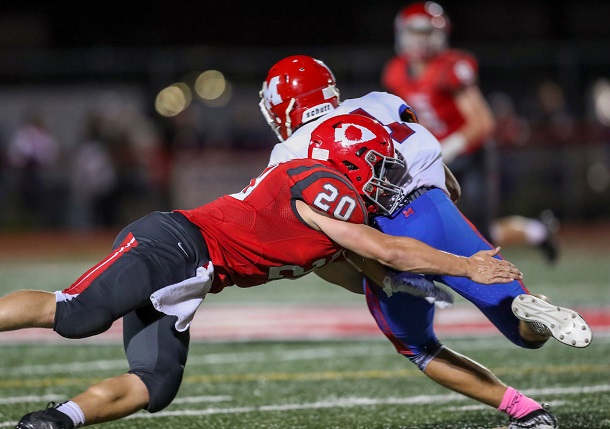 As for the numbers, the first half was all Morgantown. The Mohigans finished with 212 yards of offense with 162 of those yards coming on the ground. Thompson led the way with 12 carries for 99 yards. Jace Whetsell added 39 yards on eight runs.
Rice also was enough of a threat passing that the Tribe defense had to play honest. He went 4-for-9 for 50 yards with the one score and two picks.
Bridgeport had one of its most dismal offensive first halves in recent memory. The Tribe had just 52 yards of total offense – 44 of it on the ground. Henderson did the bulk of the work and finished with 48 yards rushing on 13 carries. The Indians managed to lose yardage with a sack and another play that was blown up in the backfield.
“The first half was disappointing,” said Cole. “… It was effort level on a lot of fronts. We didn’t make adjustments fundamentally and technique wise to take advantage of what they were giving us.”
BHS will look to move to 3-0 next week as it visits Big 10 and Harrison County foe Liberty. Morgantown, 0-2, will play its first home game of the season Friday when it hosts Fort Hill out of Maryland.
Editor's Note: Top photo shows Austin Springer getting ready to follow through on his game-winning kick, while the second photo shows Carson Winkie blocking Morgantown's field goal try in overtime. In the third picture Devin Vandergrift helps to break up what would have been a spectacular late fourth quarter pass to Preston  Fox. In the fourth photo, Cameron Cole returns the blocked field goal to midfield late in regulation. In the fifth picture, Bridgeport's J.R. Coburn leads a gang tackle, while the next photo shows Sam Drake bringing pressure on MHS quarterback Cam Rice. In the seventh photo Vandergrift runs one of several succesful second half bootleg plays. Brian Henderson is shown next as he battled, at times, the bulk of the Morgantown defense on his way to another strong night. Bottom photo shows Elijah Smith making one of several open field tackles in the game. Photos by Ben Quen and Joey Signorelli of www.benqueenphotography.com.