Bridgeport High School’s new football coaching staff had a lot of familiar looks to the one it had last year. As for everything else, it looked pretty familiar too. 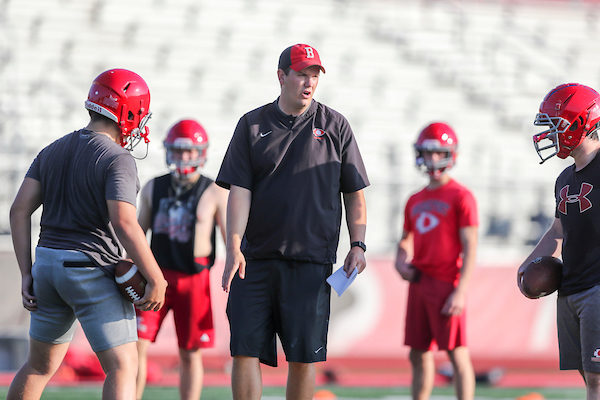 New head Coach Tyler Phares, who moved up from the assistant ranks was on hand to lead the first official day of activities. Last year’s head coach, John Cole, is this year’s assistant head coach was back working with the linemen.
“Nothing’s really changed, and things went smooth as we expected,” said Phares. “Coach Cole and I just traded hats is what it came down to. Practice is the same, the kids are the same, and the expectations are the same.”
The numbers were consistent with recent years at BHS. Phares said roughly 45 were out on day one with those all being sophomores, juniors, and seniors.
“It’s a pretty good turnout and we were hoping to get a few more kids, and we may, but 45 is a good number,” said Phares. 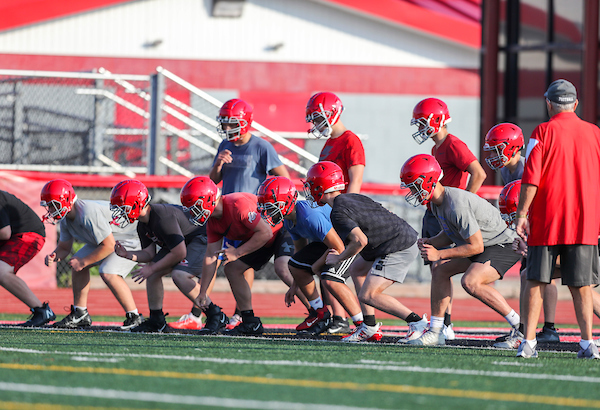 While it was Phares’ first day in his new post, it is not his first day with BHS as he has served several years as an assistant. And he’s been coaching prior to that for many years so he was not surprised with what greeted him.
“It was fairly typical. They were a little bit rusty and had to bust the sleep out of some of the kids’ eyes this morning,” said Phares. “Once they got here and got rolling things looked pretty well.”
The team will get into pads on day five of practice and get into full gear and be able to practice with contact on day seven. The Indians will scrimmage Parkersburg at home August 14 and then scrimmage at Keyser on August 20.
“We’re excited to be back on the football field,” said Phares. “We’re ready to roll.”
Editor's Note: Photos by Ben Queen of Ben Queen Photography.