In Bridgeport’s 10-1 season, there have been more blowouts than battles. In the battles, however, there’s been a pretty consistent thread.
In the Fairmont Senior loss, the overtime win against Morgantown and a battle into the second half with North Marion, it was either speed or passing – and sometimes both – that gave the Indians trouble. This Saturday’s Class AA quarterfinal opponent appears to have both.
At 1:30 p.m. Saturday, second-ranked Bridgeport will take on No. 10 and 9-2 Mingo Central at Wayne Jamison Field. The winner will face the victor of the Poca contest against Oak Glen. 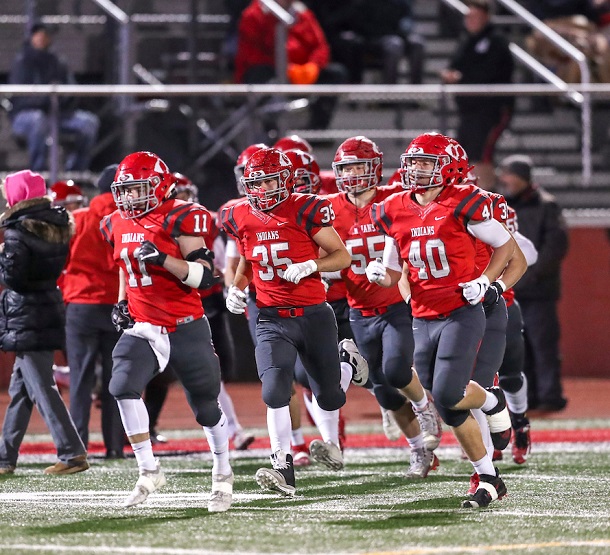 “We’ve had trouble with the talented quarterback, the speed or the combination because you don’t it very often to a high level. When you see that level of skill you have to have your own level of skill to defend against it,” said BHS Coach John Cole. “It’s a concern, but we’ll do what we’re comfortable with and hopefully the game experience we’ve had from those games will benefit us and show that by week 12 we’ve learned from it.”
What the Indians don’t want is a lesson on offense from the Miners. It’s an offense led by junior quarterback Daylin Good who has been an absolute terror for the opposition this year with his feet and his arm. He’s rushed for 980 yards on 125 carries (7.8 yards per carry) and an impressive total of 21 touchdowns.
The numbers, however, show he’s just as good when passing. He’s completed 189-of-279 passes for 3,194 yards with 29 touchdowns 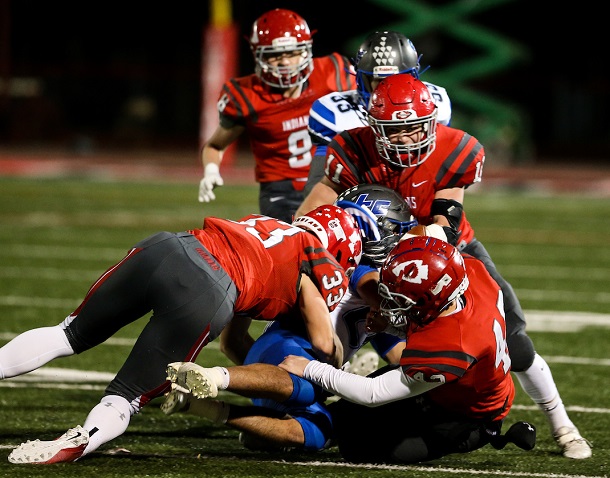 against just six interceptions. Needless to say – at least based on the numbers – this is the most prolific quarterback the Tribe has faced this season.
“He’s probably not as fast as (Fairmont Senior’s Gage) Michael, but he’s every bit as good as a runner. When you watch them play you can see him run it and pass it,” said Cole. “Part of it he’s got a good line in front of him and they have a line of kids that don’t play both ways. If you can block, throw and catch then you’ve got something. They’ve got something.”
To make matters worse, the Miners have weapons to go with Good. In the backfield, Tanner Cisco has carried the ball 90 times for 573 yards (6.4 yards per carry).
It’s at receiver where the other big threats come in. And there’s one that has all-state numbers.
Senior Drew Hatfield has caught 119 of Good’s passes for an eye-popping 1,854 yards and 20 touchdowns. If that’s not enough, Devin Hatfield has 29 catches for 574 yards and Isa Scales is good with 20 receptions for 434 yards. 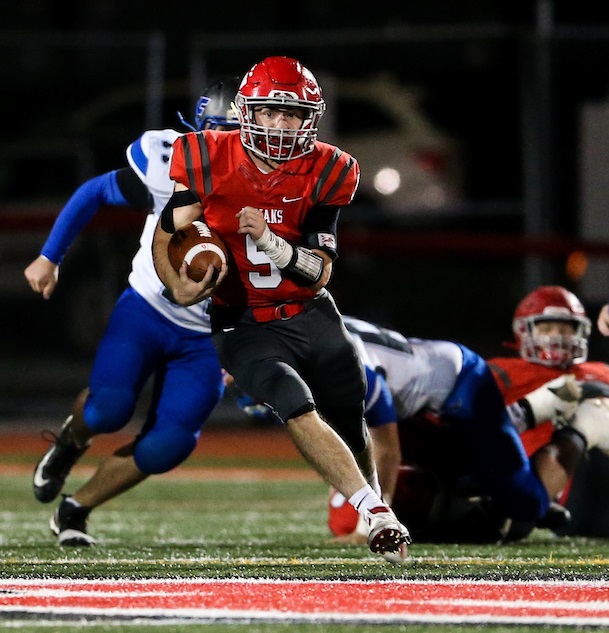 “We haven’t seen a receiver like that this year. Drew Hatfield is a concern; they’re all a concern, particularly getting yards after that catch,” said Cole. “They’re going to complete passes and get yardage, but are they going to bet behind us and get yards after the catch. That will be big in how this game turns out.”
Bridgeport will look to stop the attack with its standard defense. And standard this year has meant a whole lot of Carson Winkie. Winkie leads the club easily with 70 tackles and has gotten help from Trey Pancake with 45 starts and JT Muller with 43. Landyn Reppert has also emerged as a defensive force with 41 tackles.
The offense for Bridgeport may not be as explosive as Mingo’s, but it is producing its best numbers at the right time of the year. The Tribe has scored at least 48 points in four of their last five games and in the other the team managed to put up 28 points in a win against a Keyser team that has posted nine shutouts on the season.
A big reason for the Indians success has been a ball control offense that, despite lacking game-breaking speed, has simply wore down the opposition. The offense, which not surprisingly is almost all ground game, is a three-pronged attack.
Most recently, the attack has been led by Winkie. Winkie’s 6’2, 220-pound frame at tailback has been devastating to opposing defenses 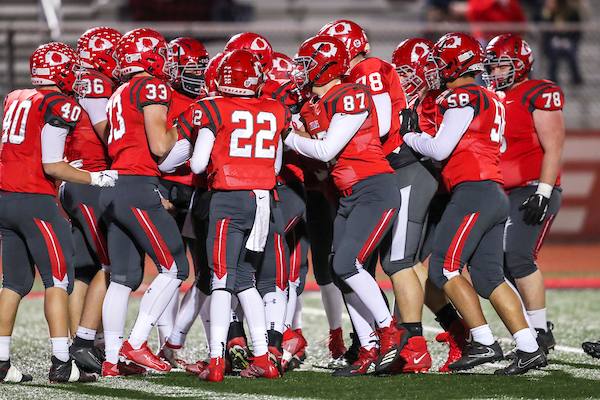 as he’s now the team’s second leading rusher with 633 yards on 107 carries (5.9 yards per rush) with a team-high 12 touchdowns.
Brian Henderson, who started the season at tailback, has shown he still has pop when moving back there from the upback spot. He leads the club with 662 yards on 117 carries (5.7 yards per carry) and nine touchdowns.
Pancake rounds out the attack with 596 yards on 83 rushes (7.2 yards per carry) with seven scores. To make matters worse, starting quarterback Devin Vandergrift and backup Cameron Cole are also explosive runners. Vandergrift has 313 yards, while Cole has amassed 335 – both averaging more than seven yards per run.
The Indians have only passed the ball 40 times this year but have been efficient when doing so. The team is 20-of-40 with Vandergrift doing the bulk of the passing. He’s completed 16-of-33 attempts for 339 yards with three touchdowns and three interceptions.
Sam Romano is the main target. He’s caught 11 passes for 298 yards and two touchdowns. Only four other players have caught passes this year for BHS and no one has more than four outside of Romano.
Bridgeport may be short a few key players Saturday. JT Muller and J.D. Love both are questionable for the contest, said Cole.
“We look to hopefully see them Saturday. Playing on Saturday gives us a little more time to get them healed up and those two have played a lot of football,” said Cole. “Unfortunately, injuries are part of the game. Outside of those two we’re pretty healthy.”
The game will available on 103.3 WAJR FM. “The Voice of the Indians,” Travis Jones, will provide the action and he will be joined by Chris George on color commentary.
Editor's Note: Photos by www.benqueenphotography.com.