For the second straight week, Bridgeport junior T-Back Zach Rohrig posted career-best rushing numbers as he finished with 212 yards on 38 carries with a pair of touchdowns to lead the Class AAA No. 8 Indians to a 28-20 victory on the road against No. 1 Parkersburg South.
In addition to beating the No. 1 team in the state, the Indians, now 5-1, also extended their running state record of consecutive non-losing seasons to 55 years. Bridgeport has finished at least 5-5 every season since 1967. 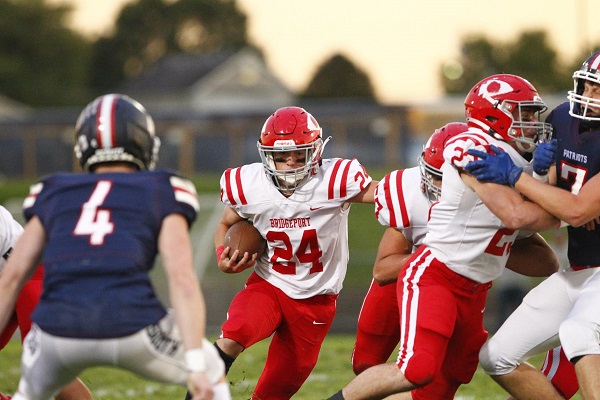 While Rorhig will certainly garner his share of postgame accolades, and rightly so, Friday’s win at the Erickson All-Sports Facility featured the typical things that have allowed the Indians to put together something like a 55-year non-losing streak. Second-half adjustments,
clutch defensive plays, strong play up front and a running game that can chew up time off the clock.
“Two words,” Rohrig said. “Offensive line. That’s all I got.”
The Patriots, who are now 5-1, entered Friday’s game as the highest-scoring team in Class AAA at 59 points her game. BHS held South to 20 and just six in the second half in a game that was tied at 14 after the first two quarters.
“In the first half we couldn’t tackle at all,” Rohrig said. “We wrapped up better in the second half and Josh Love had a big interception and we just kind of cruised form there.”
The Patriots actually had a lead in the second half as Gage Wright scored on a 6-yard touchdown run early in the third. Bridgeport’s Ty Martin blocked the PAT kick but South was up 20-14. 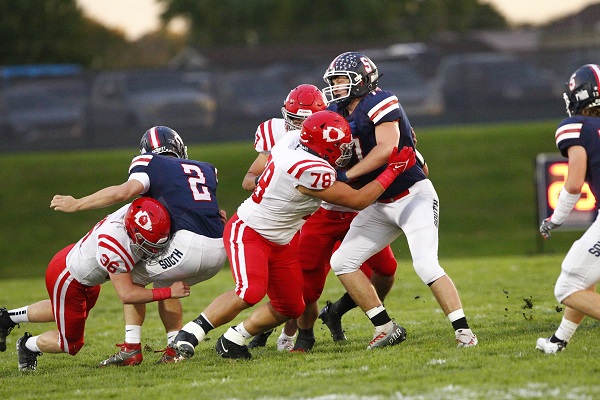 Bridgeport responded with a 14-play drive that ended with a Phil Reed 4-yard touchdown run. Taylor Thomas converted the PAT to make it 21-20 with about 2 minutes left in the third.
Love’s interception, his second of the season, came with about 30 seconds left in the third and the Indians responded with another time-consuming drive, this one covering 15 plays that was capped by Rohrig’s 10th touchdown run of the season, from 4 yards out to make it 28-20 with 4:38 left in the game.
Robert Shockey, the dynamic junior QB for the Patriots, had plenty of time left on the clock, but the BHS defense tightened up and forced a turnover on downs with 2:06 to go. Bridgeport ran out the clock to secure the victory.
“I’m so proud of our kids,” BHS coach Tyler Phares said. “We knew our mindset coming into this game was to win the line of scrimmage and win that game in a phone booth.”
The Indians were putting together a promising drive to start the game. Martin returned the opening kick 39 yards to give the Tribe the ball at midfield. Runs of 5 and 7 yards by Rohrig and Reed, respectively moved the chains. Back-to-back offsides calls on South gave BHS another first down.
Rohrig picked up another 6 yards to advance the ball to the South 23 but the Patriots got the ball back on the next snap as the result of the Indians’ sixth lost fumble of the year.
Shockey showed off his arm on South’s first possession, completing passes of 19 yards to Mason Reams, 32 yards to Triston Walker and 20 yards to Walker. The 20-yard hookup with Walker came on third-and-21 and moved the ball to the BHS 12. 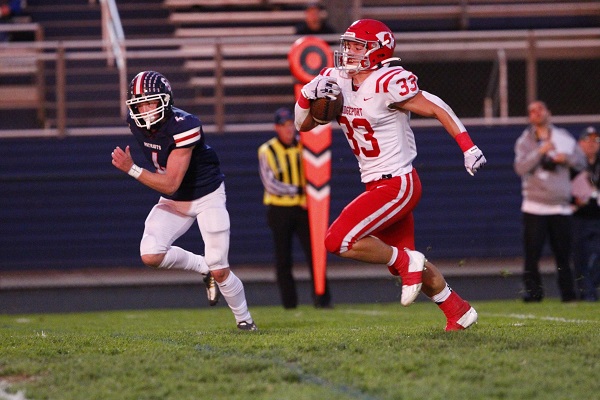 The Patriots elected to go for it, giving the handoff to Gage Wright who was brought down for a loss of one and a turnover on downs.
Reed had the big play for BHS on its next drive, taking a direct snap on third-and-1 and picking up 45 yards. Three snaps later, Charlie Brazier was in the end zone with a 25-yard touchdown run, his first on the ground this season. Thomas kicked his first of four PAT kicks to make it 7-0 with 4:41 showing on the first quarter clock.
South responded behind the tandem of Shockey and Cyrus Traugh. They hooked up on a third-and-18 pass play for a gain of 43 yards and later converted a third-and-10 for a 24-yard touchdown pass to tie it at 7 with 1:49 left in the first quarter.
Rohrig capped an impressive 17-play drive with his ninth TD of the season, scoring on a 3-yard run where he fully-extended to reach the pylon and give his team a 14-7 lead with 4:37 left in the half.
The Indians had a golden opportunity to go up by two scores. Shockey broke off a run deep into BHS territory but Rohrig forced a fumble that Ty Martin recovered. On the next play from scrimmage, Rohrig went over the 100-yard mark with a 52-yard gain. An additional 15 yards was tacked on via a South penalty and the Indians had it first down on the Patriots’ 19. 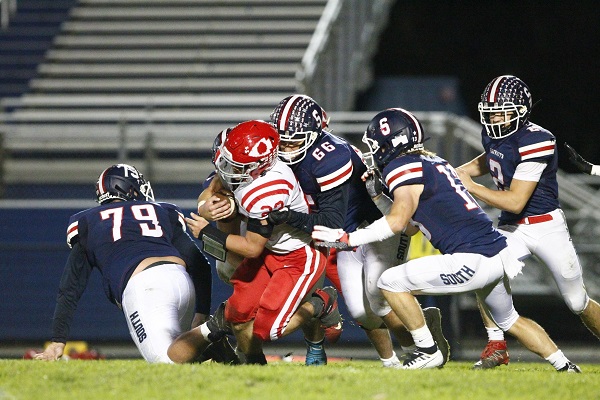 Some miscommunication on a third-down toss play resulted in a loss of 14 and the Indians proceeded to then turn the ball over on downs with 1:07 left in the half.
It proved to be more than enough time for South to strike again as Shockey threw a 42-yard touchdown pass to Traugh, who broke multiple tackles to get into the end zone to tie it at 14-all heading into halftime.
Traugh finished with seven receptions for 203 yards and the two TDs. Shockey completed 16-of-22 passes for 310 yards, two TDs and the one interception.
Bridgeport had 66 rushing attempts for 339 yards. Reed complimented Rohrig with 95 yards on 19 carries and his seventh TD of the season. Brazier added 38 yards on seven carries.
Bridgeport return to action next Friday with a road game against Preston.
Editor's Note: Top photo shows Rohrig picking up yardage, second photo featurs Kamar Summers (78) and Ryan Hall (36) opening up holes for the ground game. In the third photo, Brazier makes his way to the end zone and in the bottom photo, Reed looks to break loose from a host of Parkersburg South defenders. Photos by Joe LaRocca.