Indians Use Dominant Ground Game to Roll Past Mountaineers, 54-6, and Improve to 2-0

Cam Cole put on a clinic on how to make the most of your opportunities on Friday night.
The senior and reigning first-team Class AAA all-stater had just five rushing attempts in a 54-6 victory against Liberty at Mountaineer Field. But those five carries resulted in 205 rushing yards. Those five carries also resulted in four touchdown runs. 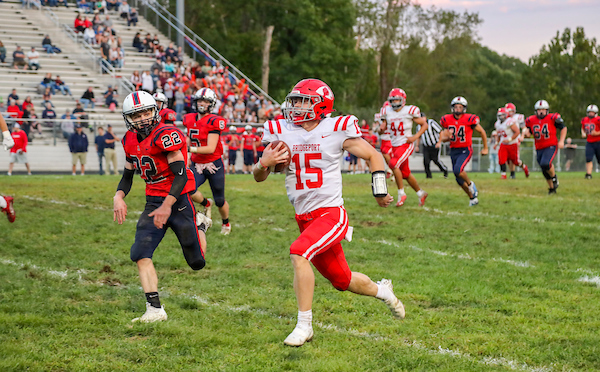 “It doesn’t really matter to me how many yards I get each week,” Cole said. “All I care about is us coming out here and getting a win. You could tell this week they were worried about (Landyn) Reppert, last week they were worried about containing the sweep. So, this week we opened up the outside holes which benefited me.
“Now you have to look at two films, you either have to stop the sweep or the inside. You have to pick your poison. That’s the thing I love about this team right now, we are dangerous on the outside and the inside.”
Although Cole’s performance against Liberty was the most electrifying, it still wasn’t close to being a one-man show. The Indians finished with 531 rushing yards — the fourth time they have eclipsed 500 since 2006. A total of 13 different players had at least one rushing attempt and nobody had more than the five that Cole and Reppert each had.
Of those 13 players who carried the ball, eight averaged double digit yards per attempt. And all of it made possible by an equally strong performance by an offensive line that features four players making just their second career starts.
“That was a focal point for us this week,” BHS coach Tyler Phares said. “We really wanted to get back to our strong side runs. Our blocking last week was actually fairly well on the front side but the problem was we had some run throughs between our right guard and backing block not talking. We didn’t pick up a few blitzes that made it look like the strong side didn’t do a great job but we fixed that and Cam ran a lot harder than he did last week. I thought they took a step forward tonight. 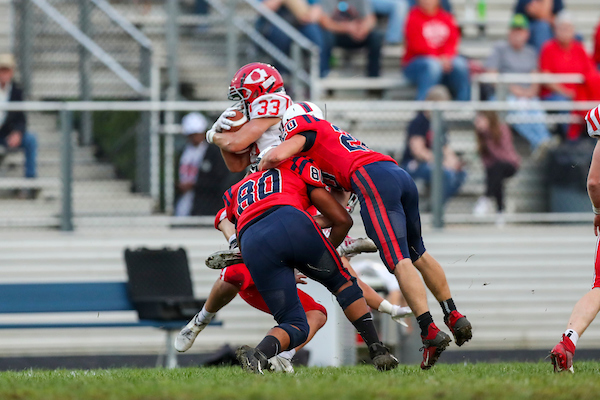 “It’s really the game plan, we have so many guys back there that carry the football, we don’t have to rely on any one kid.”
The Indians scored early and often against the Mountaineers with five of their first six drives resulting in quick trips to the end zone.
Drive 1 lasted all of three plays — a run of 36 by Aidan Paulsen, a run of 14 by Cole (his only carry that wasn’t a touchdown run) and Ty Martin finished things off with a 20-yard touchdown run and Taylor Thomas booted the first of his five PAT kicks.
The Tribe’s Dylan Hinzman recovered a fumble on Liberty’s second play from scrimmage which directly led to Cole’s first score on a 39-yard run.
Liberty moved the ball a bit on its next possession before being forced to punt. The two teams proceeded to trade interceptions. Cole actually had an impressive move to avoid being sacked before being intercepted by Raiden Childers.
Two plays, later, Charlie Brazier bailed Cole out by intercepting Liberty’s Trenton Tucker. Three plays later, Cole was back in the end zone with a 32-yard TD run. 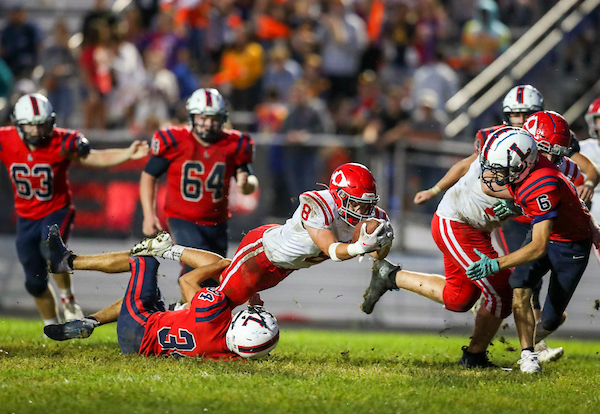 Following a punt from the Mountaineers, Cole took off for a 73-yard touchdown run and Bridgeport led 27-0 with 2:20 remaining in the first quarter.
Another Brazier interception set up Cole’s fourth TD, a 49-yard run, giving him 205 yards on five carries midway through the second quarter.
The Tribe began rotating players in freely on the next offensive possession but the results were the same as Derek Starkey capped a five-play drive with an 11-yard touchdown.
The Mountaineers put together a late scoring drive to avoid a shutout when Tucker connected with Jenson Dodd for a 4-yard touchdown pass with 1.5 seconds remaining before halftime.
Anthony Spatafore and Rowen Michaelis each scored second-half rushing TDs for the Indians. Spatafore’s was from 27 yards out and Michaelis capped the scoring in the game with a 28-yard run.
Spatafore finished with 74 yards on the ground. Reppert added 63.
Childers had 81 on 15 carries for the Mountaineers, who are now 1-2. Dodd finished with seven catches for 42 yards. Team wise, Liberty had 262 yards of total offense but also turned the ball over five times.
“That’s something we haven’t stressed a ton yet this year but we wanted to get better at,” Phares said of his team’s ability to force turnovers. 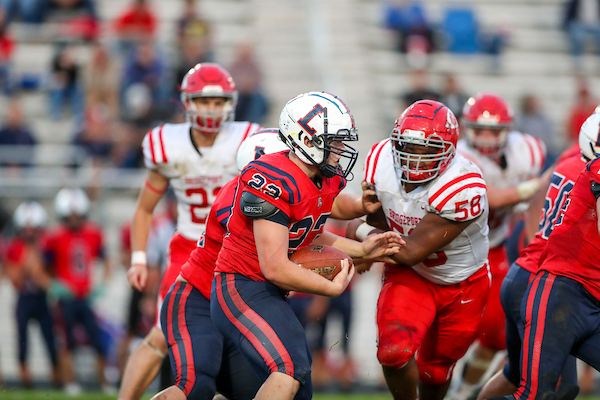 “Starting out, we just wanted to be sound, lined up correctly and run to the football. Now that we are doing that, we can start focusing on turnovers. You saw kids today going after balls in the air and balls on the ground and I thought that was great.”
The Indians will look to improve to 3-0 next Friday as the return to Wayne Jamison Field to face Fairmont Senior.
Editor's Note: Top photo shows Cole on the way to the end zone. Second photo features Brazier reeling in one of his two interceptions. In the third photo, Starkey stretches for extra yardage and in bottom photo, Beau Ford (58) chases down Liberty's Raiden Childers. Photos by www.benqueenphotography.com