For the first time this year, one of the two teams that have been ahead of Bridgeport in the weekly MetroNews High School Football Power Rankings lost. And because of that, there is a change in the top part of the standings.
Bluefield, the preseason top-ranked team and the No. 1 squad through the first two weeks of the regular season, lost to Lord Botetourt of Virginia by a 20-14 score to drop to 2-1. Because of that, the Beavers also dropped in the poll. 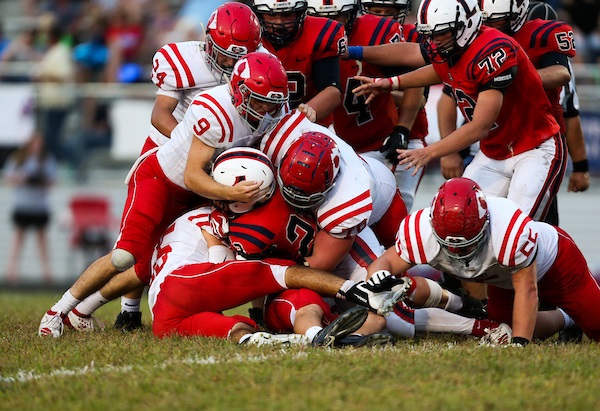 The new number one is no surprise. Fairmont Senior, the defending Class AA state champion, assumes the spot following a 39-6 win against this past Thursday against North Marion.
Not only did the Polar Bears win, they captured 18 of the 19 first place votes. Bluefield landed the final first place vote among a ballot of statewide sports writers and radio broadcasters. Despite the loss, Bluefield is still ranked in the No. 2 spot in Class AA.
Bridgeport remained in the third spot this week after taking a 35-7 win against previously unbeaten Liberty in Clarksburg. The Indians are now 3-0.
The Tribe can almost certainly make a jump in the poll with a win this week, but it won’t come easy. BHS will play host to top-ranked Fairmont Senior Thursday at Wayne Jamison Field. The Indians will try to break a three-game losing streak against the Bears.
Another future foe, Keyser, is also ranked. The Golden Tornado stand in at No. 4 after rolling past Petersburg by a 59-0 score.
The only other team Bridgeport will face this year that is ranked is Robert C. Byrd. The Eagles moved up from No. 10 to No. 7 following a 48-27 win against East Fairmont. Bridgeport will visit the Eagles a week from this coming Friday.
Martinsburg remains a unanimous No. 1 in Class AAA. Despite losing to Linsly Academy by a 31-7 score, Wheeling Central remains the top-ranked team in Class A with 13 first place votes. Doddridge County is ranked second and has six first place votes after its 65-0 win against Calhoun County.
Click HERE for the top 10 in all three classifications.