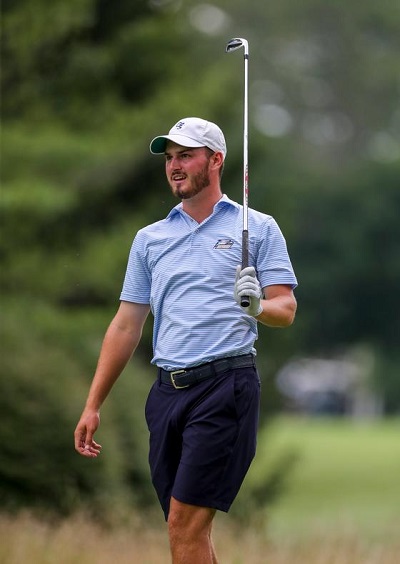 Williams became the youngest to ever win the event a year ago and nearly made it two in a row as he finished with a -3 277. Ravenswood’s Alex Easthom won this year’s WV Am with a -4 276.
Williams’ best round came on Friday when he shot a 65. He opened with a 68 before shooting 71 and 73, respectively on Wednesday and Thursday prior to Friday’s final round.
Chris Williams, from Scott Depot, also finished tied for second, while Huntington’s Pat Carter was fourth at -2. Rounding out the Top 5 was Jackson Hill, from Daniels, who finished at even par.
Another Bridgeport golfer, Woody Woodward, finished just out of the Top 10, in a tie for 11th at +4.
Marco Oliverio, Brian Bailey and Jay Woodward, all from Bridgeport, finished tied for 39th along with Morgantown’s Tyler Franklin.
To view all final scores from the WV Amateur click HERE
To see more photos from the event click HERE
Editor's Note: Photo of Mason Williams during third-round action at the 101st West Virginia Amateur by Ben Queen for www.benqueenphotography.com