No. 6 Indians Ready for Challenge Against No. 3 Bulldogs in Class AAA Quarterfinals

For the second straight year, Bridgeport’s postseason journey will include a trip to Martinsburg.
The No. 6 Indians (9-2) face the No. 3 Bulldogs (9-2) at 7:30 p.m. Saturday in the Class AAA quarterfinals.
A year ago the two met in the AAA semifinals with Martinsburg winning 21-0 and the Bulldogs would go on to win their ninth state championship since 2010. 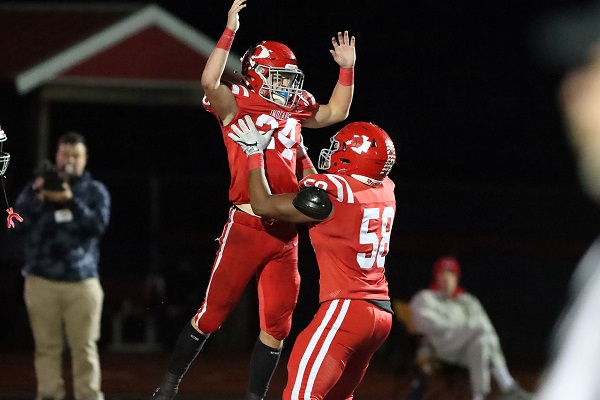 Many throughout the state will view this as a David vs. Goliath type matchup. Partly because BHS is the smallest Class AAA school in the state. Partly because Martinsburg has been the elite program in the state since 2010. The Bulldogs won four straight titles between 2010 and 2013. And since 2016, the only thing that has defeated Martinsburg in the playoffs is COVID as the playoffs were shut down in 2020 and South Charleston was declared champion.
If not for the COVID year, the Bulldogs would be gunning for their sixth consecutive state title.
BHS understands it’s in a bit of an underdog role but make no mistake about it, this is not a football team that is intimidated by Martinsburg or anybody else.
“We’re not afraid of them,” BHS coach Tyler Phares said. “We respect them. We know they are a very good football team. We’re excited to go play them and give them our best shot. We know we have to play our best football. We’ve said all year we want to be playing our best football in November and we feel like we are.”
The Indians are coming off a dominant performance in a 41-13 opening round victory against Cabell Midland.
Zach Rohrig had a career-high 255 rushing yards on 19 carries and three touchdowns. Other than Rohrig’s 19 rushing attempts, the Indians only had 13 more plays from scrimmage.
“Zach had a great night but we also blocked well at every position,” Phares said. 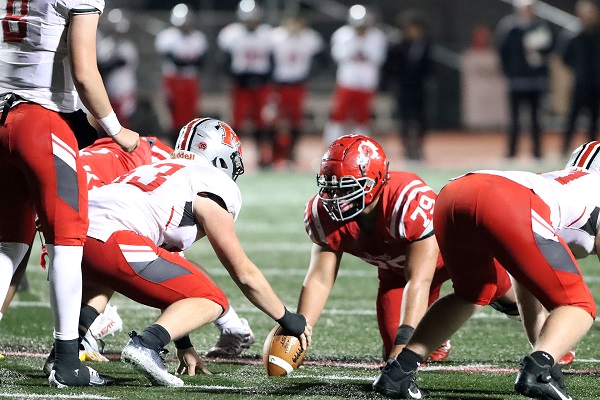 For the season, Rohrig now has 1,509 yards on 169 carries and 19 touchdowns. Phil Reed gives the Tribe a pair of 1,000-yard backs as he has 1,071 yards on 144 attempts and 12 touchdowns. Charlie Brazier adds 536 rushing yards and seven touchdowns. Ty Martin has 422 rushing yards and eight touchdowns. Ryan Hall has 161 yards and eight TDs.
The Indians also played well on defense against Cabell Midland, led by Reed’s 19 tackles. Rohrig had 13, Brazier had 11, Wes Brown and Kamar Summers each had eight as on every play the Knights ran, there was a host of BHS defenders there to greet them.
For the season, Reed has 92 tackles to lead a unit that features 17 players who have reached double digits. Fifteen different players have at least one tackle for a loss.
As one would expect, Martinsburg has plenty of firepower on both sides of the ball as well.
Senior quarterback Ezra Bagent has thrown for 2,684 yards and 34 touchdowns. Junior Murphy Clement does a little bit of everything on offense for the Bulldogs. He will take snaps at QB, he has caught 14 passes for 240 yards and two touchdowns, and has 566 yards and 11 rushing touchdowns. 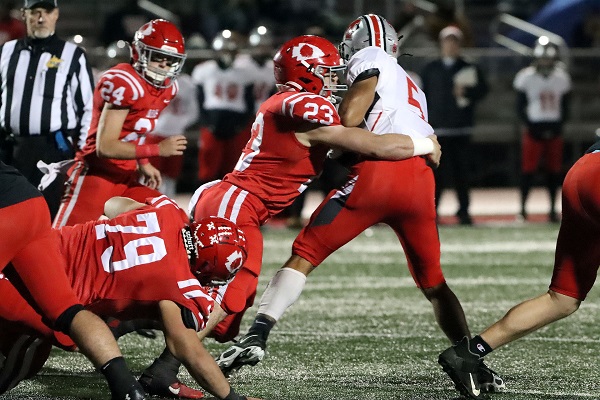 Buzz Dover leads Martinsburg in receptions with 43 for 696 yards, while Jameer Hunter has 30 catches for 720 yards and 11 touchdowns, while also being considered one of the most dangerous kick/punt returners in the state.
Defensively, Martinsburg is led WVU commit Kam Shallis who has 63.5 tackles this year and defensive tackle Rashad Reid, who has 65 tackles, including 18.5 for a loss.
Despite the 21-0 loss last year, Bridgeport has played Martinsburg as tough as anybody in the postseason since at least 2015 – which was the last year the Bulldogs lost a playoff game. Since 2016, Martinsburg is not just undefeated in the postseason, it has lost just two regular-season games to in-state opponents (Spring Valley twice).
Since 2007, Bridgeport is one of only three schools to have a playoff victory against Martinsburg as the Indians defeated the Bulldogs 27-26 in 2007. The other two are South Charleston (2008 and 2009) and Capital (2014 and 2015).
Saturday’s game will be broadcast live on 103.3 WKMZ and also available on the Bridgeport Sports Radio App as well as www.bridgeportindiansfootball.com
The Voice of the Indians Travis Jones will provide play-by-play with Chris George on color commentary and Brent Kimble reporting from the sidelines.
Tickets to the game are being sold digitally only and can be purchased HERE
The winner between Bridgeport and Martinsburg will face the winner of Jefferson and Huntington in the semifinals.
Editor's Note: Top photo shows Beau Ford celebrating with Rohrig. Summers awaits the snap in the middle photo and in the bottom photo, Reed finishes off one of his 19 tackles against Cabell Midland. Photos by Joe LaRocca.