Class AAA No. 8 Bridgeport (4-1) hits the road tonight for a showdown with No. 1 Parkersburg South (5-0) tonight at the Erickson All-Sports Complex in Parkersburg.
Kickoff is set for 7 p.m. and the game will be broadcast live on 103.3 WKMZ and also be available on www.bridgeportindianslfootball.com and the new Bridgeport Sports Radio APP. The Voice of the Indians Travis Jones will provide play-by-play, with Chris George on color commentary and Brent Kimble providing sideline reports. 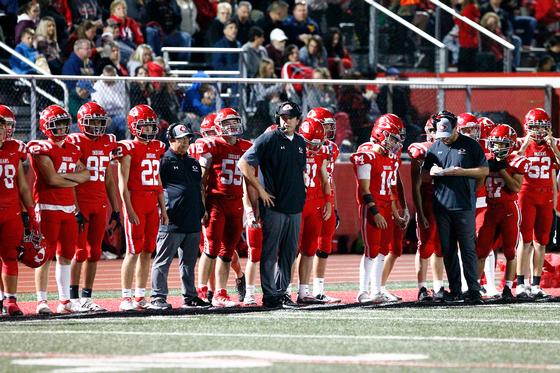 Tickets are available electronically at:  www.bit.ly/parkersburgsouthhs-tickets ($7.00 adults, $6.00 student/ senior citizen) or cash at the gate for $8.00.
Bridgeport leads the all-time series with South, 4-2. The two schools were supposed to meet in Bridgeport last year but that game was a COVID casualty and the Indians were awarded a forfeit victory.
In 2020, the Indians defeated the Patriots, 56-28.
This season, South has won its five games by an average margin of 59-12.4. Not only are the Patriots prolific on offense, they are balanced, averaging 264.6 rushing yards per game and 225.4 passing yards per game.
“They are completely different type of team, the best offensive team we’ve seen,” BHS coach Tyler Phares said. “They have athletes all over the field and their offensive line is big and strong and they move well.”
Leading the way for South is junior quarterback Robert Shockey, who is 64-of-95 through the air for 1,096 yards  with 17 touchdowns and just three interceptions. He’s also the team’s second leading rusher with 536 yards and five touchdowns.
“He can make great plays out of nothing,” Phares said of Shockey. “He can run you over, run past you or make a throw.”
Shockey has no shortage of weapons around him. Gage Wright is the team’s leading rusher with 538 yards and 10 touchdowns. Four different receivers have been productive in the passing game with multi-sport standout Cyrus Traugh leading the way. 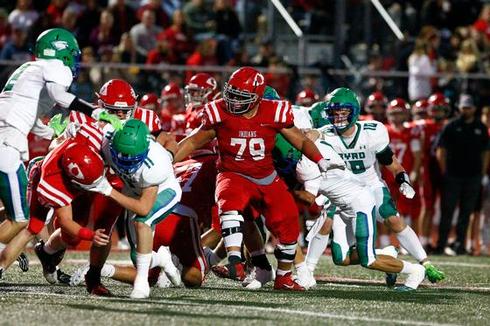 Traugh has caught 22 passes for 285 yards and eight touchdowns. He’s also a factor in the running game.
“They have four different kids that can get to the football,” Phares said. “Traugh sticks out the most. He can score from anywhere if he has the ball in his hands.
Also for South, Mason Reams has 15 catches for 266 yards and six touchdowns, Triston Walker adds 14 catches for 227 yards with three touchdowns and Turner Garretson has 10 receptions for 293 yards and three TDs.
While this is likely the most potent offense the Tribe has seen, one could make the case that Bridgeport has the best pass rush, best defense and the offense best suited to control time of possession that the Patriots have seen.
Phares said controlling the ball on offense would help but due to South’s aggressive style on defense with their frequent blitzing, if the Indians get a chance for a big play on offense they need to take advantage of it.
Defensively, one area that has stood out for the Tribe is the ability to pressure the quarterback and it is an ability that comes from multiple players.
“We get interior pressure, we get edge pressure and we can blitz pretty well,” Phares said.
The Indians have 11 different players who have reached double digit tackles in five games including five with at least 20. Phil Reed leads the way with 37 and had 2.5 for a loss.
Tanner Hathaway has posted 30 tackles, including 4.5 for a loss.
Josh Love, Cale Culicerto and Cam Hess add 23, 21 and 21 stops respectively. 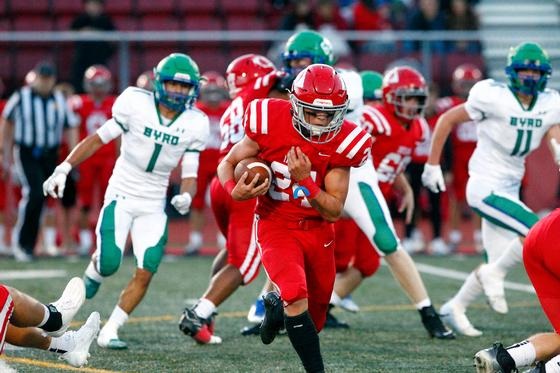 Defensive end Aidan Sparks and defensive tackle Kamar Summers each have 4.5 tackles for a loss. Summers also has a team-best three sacks.
Offensively, the Indians are averaging 373. 2 yards rushing per game.
Reed is the team’s leading rusher with 555 yards on 69 carries with six touchdowns. Zach Rohrig is close behind with 504 yards on 55 attempts and a team-best eight touchdowns.
Ty Martin adds 291 rushing yards on 34 carries and five TDs. Charlie Brazier had 204 yards on 32 carries and caught the team’s first touchdown pass a week ago in the 42-0 victory against Robert C. Byrd, a 41-yard pass from Reed.
BHS also has pair of players in the return game with Love and Martin who are both averaging more than 40 yards per kick return.
Editor's Note: Top photo shows the BHS sideline during last week's RCB game. Middle photo features Summers and bottom photo features Rohrig. Photos by Joe LaRocca.