The non-losing season has long since been secured. A postseason appearance is also already in the books. What’s at stake tonight for the Bridgeport football team, however, could go a long way in assisting their chances of getting back to Wheeling Island for a shot at another Class AA state title.
The No. 2-ranked Indians will close the 2019 regular season hosting winless Philip Barbour. The 9-1 Tribe will start action at 7 p.m. at Wayne Jamison Field on senior night. 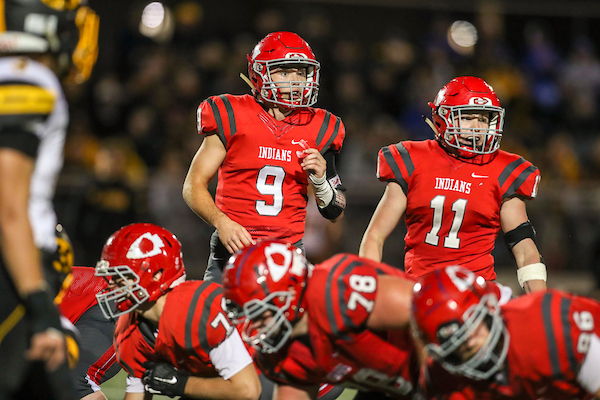 “This team, because they didn’t play at a high level earlier in the year, they focused in and it motivated them to keep working hard, which hasn’t been a problem this year or even last year for that matter,” said Cole. “When the North Marion and Keyser games were at hand, they knew that they had put themselves in position for a good season and that was another motivation.
“I don’t follow the numbers, but I’ve been told a win could get us homefield throughout the playoffs, which is big,” Cole continued. “We’re talking about it because we want the kids to know what’s at stake.”
While many may see tonight’s game as a formality against a Colts team that has struggled mightily all season, Cole said no one is taking anything for granted. Instead, he’s concerned about what the Colts have and that the Tribe is coming off a bye week.
“It’s always tougher coming off a bye week no matter who you play. You’re just not hitting as much and you had a week where you didn’t really prepare for anyone,” said Cole. “I’ve seen our teams come out flat before and we can’t afford to do that with what’s at stake.
“The message has been to go full speed Friday because they’ve worked too hard to get the opportunity that looks to be in front of them,” he continued. “If we don’t come out and execute anything can happen.”
Cole said the Colts are primarily a run team but will do so out of multiple formations. In fact, he said he expects the team to do with 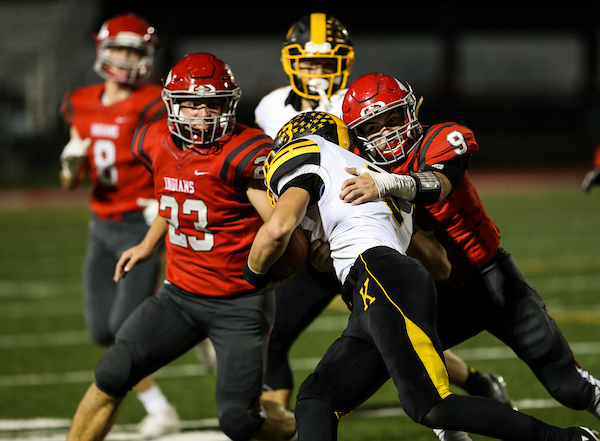 formations they haven’t seen all season.
“The concern is getting lined up right out of our base defense. If not, you get into trouble,” said Cole.
Bridgeport’s defense is led by the three-headed monster of Carson Winkie (62 tackles), JT Muller (43 tackles) and Trey Pancake (42 tackles). Devin Vandergrift (34 tackles) and Michael Watkin (32 tackles) are also among the team leaders.
“When we’re on offense, they’ll give us some unorthodox looks. They do things with their linebackers we haven’t seen so far this year,” said Cole. “They don’t do the same thing every down on defense.”
Bridgeport, typically, does do the same thing every down on offense. And that’s run the football.
This year, Bridgeport is heading toward the postseason without a single back within range of 1,000 yards rushing. While that may seem problematic, the Indians have three backs with more than 500 yards.
Pancake leads the way with 553 yards on 80 carries (6.9 yards per rush), while Brian Henderson is next at 540 yards on 111 rushes (4.9 yards per carry). Carson Winkie is at 517 yards on 92 rushes (5.6 yards per carry). Winkie leads the team with 10 touchdowns.
“Offensively, I don’t think you’re going to see anything unusual from us other than maybe trying to work a few things in. We’ve got to be good at what we do against a Philip Barbour team that’s really low on numbers this year,” said Cole. “That’s been a problem for them.”
Cole said the Indians go into the contest in relatively good health. He did say a few players were rested up during their bye week but should be good to go tonight.
The game will once again be carried live on 103.3 WAJR FM. “The Voice of the Indians” Travis Jones will make the call and he will be joined by Chris George on color commentary.
Editor's Note: Photos by www.benqueenphotography.com.