Taylor Thomas kicked a 37-yard field goal with 3:28 to play and the Indians came up with one final big defensive stand lifting Class AAA No. 11 Bridgeport to a 24-21 victory against Class AA No. 1 Fairmont Senior Thursday at East-West Stadium in Fairmont.
“Definitely the best field goal of my career,” Thomas said. “I came here my sophomore year, my first time ever kicking a field goal. I’m glad I got to come back and kick another one. It was going a little left so I was definitely saying, ‘Hook, hook.’” 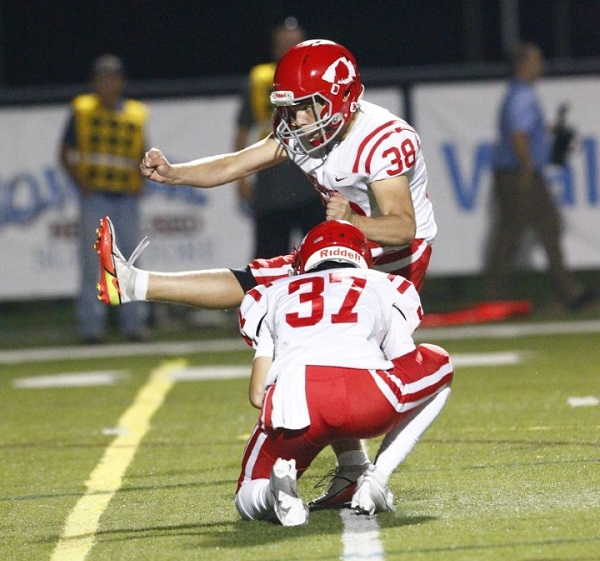 The Thomas field goal, also the longest of his career, capped an epic 17-play drive for the Indians that chewed up the majority of the fourth quarter after Senior had tied the game at 21 on the final play of the third thanks to a 50-yard touchdown pass from Brody Whitehair to Trey Longwell.
The final drive by BHS featured a successful fourth-and-2 conversion from its own 28 as Charlie Brazier picked up the first down to keep the chains moving.
"I knew if we gave him the football, Phil Reed, Zach Rohrig the same way, he would get it,” BHS coach Tyler Phares said. “That was big. Charlie came up huge on that fourth-and-2.”
Brazier, Reed and Rohrig alternated hard runs, primary on inside carries and methodically moved the ball down the field to set up Thomas.
The 16th play was a pickup of 3 for Rohrig on third down to set up fourth-and-6 from the 20.
“We wanted to draw them offsides, I think if we have it fourth-and-1 we would have went for it,” Phares said.
Part of his rational was the fact that although the Indians’ drive had lasted nearly 9 minutes, 3:28 was still a lot of time for the quick-strike Senior offense.
Whitehair connected with Dylan Ours for a gain 35 to give the Polar Bears a first-and-10 at the Bridgeport 35. But that would be the last completion for the talented junior quarterback. 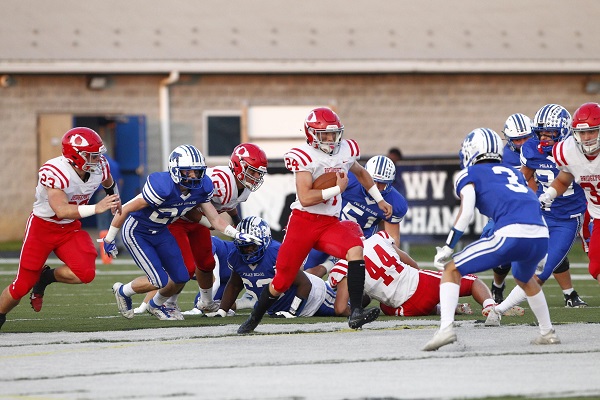 The next pass was broken up by Josh Love. A costly holding penalty on third down pushed the ball back to around midfield before Whitehair threw back-to-back incomplete passes to turn the ball over on downs with 1:47 to go.
BHS broke a 14-all tie in the third when Rohrig scored on a 7-yard TD run, his second of the game and fourth of the season, with 1:07 showing on the clock.
The Indians were putting together a decent drive on the opening possession of the game and moved the ball into Senior territory before coming up short on a fourth down conversion.
The Polar Bears’ first drive was similar as they advanced to the Bridgeport 29 before a bad snap on fourth down resulted in a fumble recovery for the Indians’ Ryan Hall.
Rohrig proceeded to cap the ensuing nine-play drive with a 2-yard touchdown run. Thomas made his first of three PAT kicks to make it 7-0 with 2:51 remaining in the first quarter.
Each team’s defense took over for the next couple of possessions.
Midway through the second quarter, Whitehair took a keeper on third-and-5 for a 39-yard touchdown run, knotting things up at 7-all.
BHS responded quickly with Martin fielding the ensuing kickoff at his own 3 and returned it all the way to the Senior 7 for a 90-yard return.
Two plays later, Phil Reed was in the end zone with a 6-yard touchdown run and the Indians had a 14-7 lead. 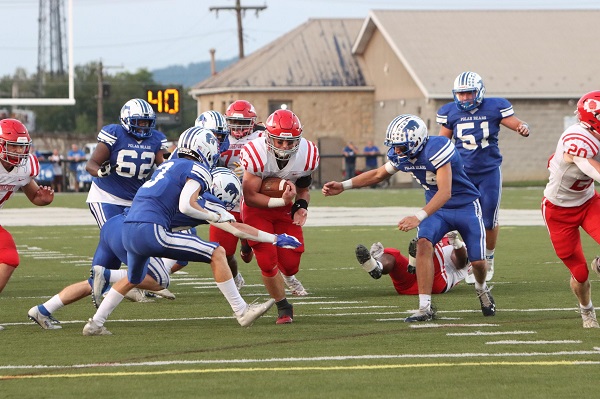 The lead wouldn’t last long as Whitehair threw a 63-yard touchdown pass to Jayden Cheriza with 44 seconds left in the half.
Following a touchback, the Indians marched to the Senior 34 where they went for it on fourth-and-4 but an incomplete pass from Reed to Cale Culicerto turned the ball over on downs and ended the first half.
The Polar Bears outgained the Indians 360-302 with 85 yards on the ground and 275 through the air.
Whitehair ran for 51 yards and the TD while completing 15-of-25 passes for 275 yards and two TDs.
His four primary targets in the passing game all produced. Cheriza had three catches for 79 yards, Longwell four for 71, Ours 3-63 and Cannon Dinger 3-39. 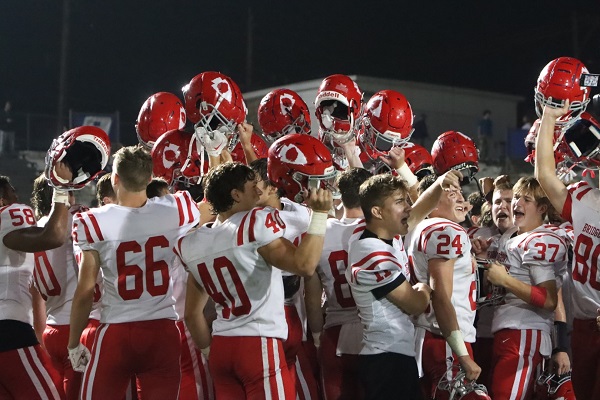 All of the Indians’ yards came on the ground. Reed had a game-high 147 yards on 24 attempts and a touchdown. Rohrig also topped the century mark as he finished with 114 yards on 22 carries and two TDs. Brazier chipped in with 52 yards on eight carries.
Thursday’s win for the Tribe makes three straight in the series against the Polar Bears and the Indians now lead the all-time series, 33-14.
BHS returns to action next Friday with a home game against Robert C. Byrd.
Editor's Note: Top photo shows Thomas booting his game-winning field photo. In the second photo, Rohrig (24) looks for running room, while Reed (23) does the same in third photo. Bottom photo shows the Indians celebrating at the end of Thursday's game. Photos by Joe LaRocca.