By Connect-Bridgeport Staff on September 14, 2021

As some teams moved ahead and after them, Bridgeport High School’s football team remained status quo. Once again, the Indians are ranked No. 4 in the Class AAA portion of the MetroNews High School football power ratings. 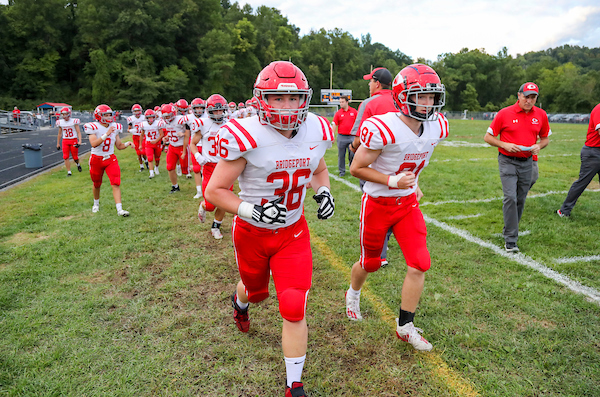 The rankings are based on the votes of radio broadcasters and sports writers across West Virginia. The poll consists of 20 members.
The Tribe stayed in the same spot following their 54-6 win against homestanding Liberty. Bridgeport is now 2-0 on the year and will host Fairmont Senior Friday.
Martinsburg maintained its top atop the ‘AAA’ standings. The Bulldogs routed Sherando (Va.) 58-7 to move to 3-0.
South Charleston, 3-0, moved up to No. 2 after a 55-0 win against St. Albans. Huntington, previously No. 5, is in the third spot after a 21-17 win against Cabell Midland. CMHS fell to No. 5 after the setback.
Future BHS foe Princeton moved drop from No. 8 to No. 9 despite a win. The 3-0 Tigers bested Oak Hill 55-30.
The Polar Bears will be visiting Wayne Jamison Field as the top-ranked team in Class AA. The 2-1 FSHS squad got past county foe North Marion 20-14 this past week to maintain their status.
Bridgeport’s opponent after Friday, Robert C. Byrd, is ranked No. 2 in Class AA. The Eagles, 2-0, earned an impressive road win at Class AAA Greenbrier East by a 31-16 score.
Despite losing to Bellaire (Ohio) 14-7, Wheeling Central remained No. 1 in Class A. Doddridge County, 2-0, fell from No. 4 to No. 5 despite having its game with Calhoun County not played due to COVID issues.
Click HERE for the top 10 in all three classifications.
Editor’s Note: Photos used with this story are by Ben Queen Photography.