Bridgeport High School senior Phil Reed has been named the Big 10 Conference Offensive Player of the Year as selected by Big 10 coaches and administrators.
Reed helped lead the Indians to a 9-3 record and a spot in the Class AAA quarterfinals by rushing for 1,136 yards and 12 touchdowns on 161 carries. Reed also threw for 215 yards and a touchdown and if he wasn’t occupied by having the ball in his hands he was delivering bone-crushing blocks – an aspect all backs in the Indians’ single-wing are expected to do. 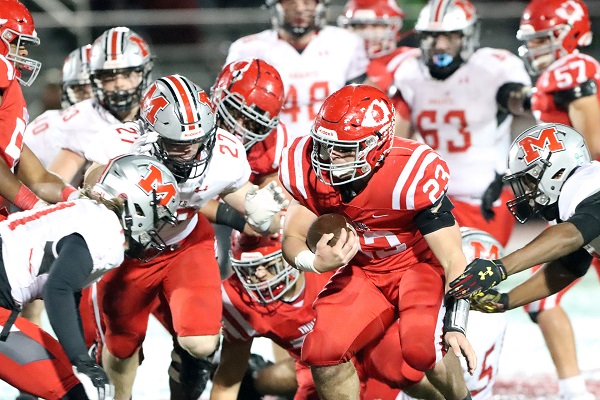 He was no slouch on defense either where as a linebacker he led the Indians with 101 tackles, including four for a loss, one sack and one forced fumble.
Reed’s honor was one of five individual awards the Big 10 gave out. Fairmont Senior’s Dylan Ours was named the Overall Player of the Year. Philip Barbour’s Dashawn Webster was named the Defensive Player of the Year, North Marion’s Harley Sickles was named Lineman of the Year and East Fairmont’s Shane Eakle was named Coach of the Year.
The Big 10 again split its All-Conference Teams into two with an “A” team for the bigger schools and a B team for the smaller schools.
As expected, the Indians had several players recognized on the “A” team. Three BHS players earned all-conference spots at offensive line in Kamar Summers, Beau Ford and Aidan Sparks.
Zach Rohrig was chosen as an all-conference running back after leading the Tribe with 1,583 rushing yards on 192 carries and 19 touchdowns.
Two more BHS linemen were all-conference selections on the defensive side of the ball in Mario Galindo and Wes Brown. Galindo had 16 tackles, including five for a loss, and a sack. Brown had 13 tackles, including two for a loss, and a sack.
Ryan Hall was picked as an all-conference linebacker. Hall, the Indians’ utility player who played in a variety of spots the past two years, had 43 tackles, including 3.5 for a loss, 1.5 sacks and recovered three fumbles.
At defensive back, BHS has two all-conference players in Charlie Brazier and Ty Martin. Brazier finished with 53 tackles, 5.5 for a loss and one interception. Martin had 34 tackles, 0.5 for a loss, two interceptions and 11 pass breakups.
Cam Hess is an all-conference defensive utility selection for the Indians after posting 56 tackles, 3.5 for a loss and 1.5 sacks.
Rounding out the all-Big 10 selections for BHS is kicker Taylor Thomas who made 3-of-6 field goals and booted 56-of-58 PAT kicks.
To see the rest of the “A” team selections as well as all “B” team selections click HERE
Editor's Note: In top photo, clockwise from top left: Reed, Sparks, Summers, Ford, Rohrig, Galindo, Thomas, Hess, Martin, Brazier, Hall and Brown. In bottom photo, Reed looks for running room against Cabell Midland.