Bridgeport and Martinsburg are two high school football teams used to still be playing this time of year.
The Indians have advanced to at least the semifinals every year since 2012 and won Class AA state championships in 2013, 2014, 2015 and 2019. Since 2010, the Bulldogs have won eight Class AAA titles, including the previous four. 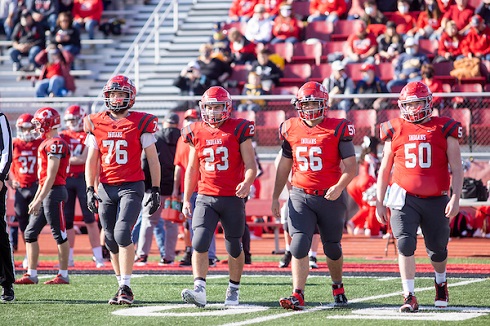 This year, thanks to Bridgeport’s move back up to Class AAA, their postseason paths will cross as the fifth-seeded Indians (7-1) will travel to No. 4 Martinsburg (5-1) for a quarterfinal game scheduled for 4 p.m. Saturday at Cobourn Field.
The game was orginally scheduled for 7:30 p.m. Friday, but Berkeley County went red on Friday's daily DHHR color map, pushing the game back one day in hopes of Berkeley getting back below red.
If Berkeley is still red Saturday at 10 a.m. the game will be called off and Bridgeport advances via forfeit, unless Berkeley would somehow be gold on the 5 p.m. WVDE map, then Bridgeport and Martinsburg could possibly play on Sunday.
(Stay tuned to Connect Bridgeport for a Saturday update shortly after 10 a.m. in regard to status of the game).
Both teams shined in their opening round matchups, Martinsburg beating George Washington 62-0 and the Indians taking care of Washington, 55-7.
The shutout against GW was the ninth out of the last 17 playoff games for the Bulldogs, a span in which they have outscored their postseason opponents by a combined score of 910-133. About the only thing that hasn’t gone Martinsburg’s way the past couple of years is a regular-season loss to Spring Valley this year that snapped a 57-game overall win streak. 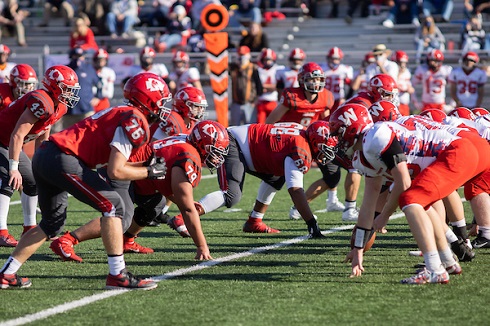 The Bulldogs still score a lot of points, don’t give up many and are still the frontrunners to win the Class AAA state title until somebody actually beats them in Wheeling.
“The fear is when you play Martinsburg, you could play well for a quarter or play well most of the game then all of sudden they can score points in a hurry,” BHS coach John Cole said. “What they do, it’s not real complicated but it’s a lot of high percentage and it’s quick.”
Cam Cole had an electrifying performance for the Tribe with 216 rushing yards with four touchdowns to go along with 95 yards through the air and a TD pass.
For the season, Cole has 1,301 rushing yards on 132 attempts with 18 touchdowns, while completing 11-of-17 passes for 277 yards and five touchdowns.
He has plenty of help in the Indians’ single-wing attack as Hayden Moore adds 554 rushing yards and 11 touchdowns (he has also caught two touchdown passes), J.T. Muller has 530 rushing yards and seven TDs and J.D. Love has 321 rushing yards and four touchdowns.
Defensively, linebacker Landyn Reppert leads the Indians with 66 tackles. Eight other players have at least 30 tackles. The defensive end duo of Muller and Tanner Saltis have been especially effective with 51 and 44 tackles, respectively. They have combined for 16.5 tackles for a loss and eight sacks. 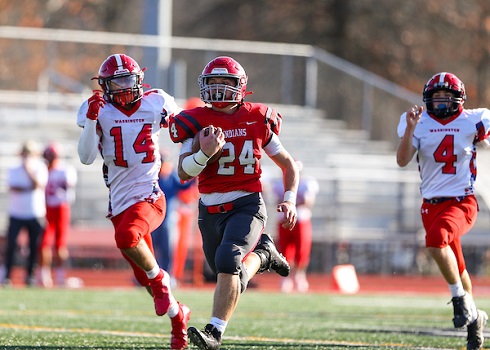 Martinsburg has a dynamic 1-2 punch in its backfield with Naiem Kearney and Kevon Warren. Kearney has 625 rushing yards on 41 attempts with eight touchdowns and Warren adds 486 yards with eight TDs.
Warren is a dual-threat quarterback that splits time with Peyton Curry. Warren has thrown for 482 yards and six touchdowns, while Currey has thrown for 688 yards and 14 touchdowns.
The latest in a long line of top-notch receivers for the Bulldogs is Anthony Smith who has caught 25 passes for 680 yards and nine touchdowns.
“Our defense is going to have to line up and play their position because this isn’t the type of team that the calvary is going to be able to get there in time,” Coach Cole said. “Plus we are going to have to play defense on offense as well and try to run some time off the clock and shorten the game.”
Smith is also a playmaker on defense for Martinsburg with a team-best 50 tackles. Braxton Todd and Hudson Clement have 45 and 31.5 tackles, respectively. Clement has eight tackles for a loss and has forced three fumbles.
“They have so much confidence in scoring on offense that on defense they can take chances,” Coach Cole said. “They are aggressive, and we aren’t going to be able to go sideline to sideline on them. We are going to have to run right at them.” 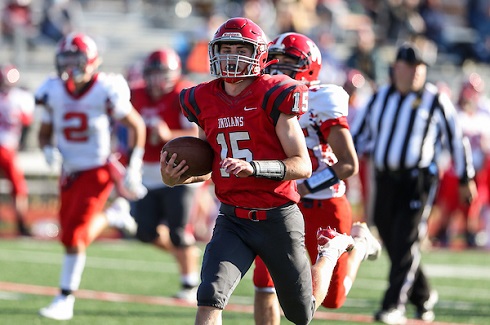 This will be the fourth-ever meeting between the two teams. Bridgeport beat Martinsburg in the 2007 Class AAA playoffs at Wayne Jamison Field, 27-26. But the Indians have lost their two previous trips to Martinsburg in 1952 and 2010.
The Indians Radio Network will once again be broadcasting the game which can be heard locally on WKMZ 103.3 FM or on the Bridgeport Sports Radio App and www.bridgeportindiansfootball.com
The “Voice of the Indians” Travis Jones will be on play-by-play with Chris George on color commentary and Brent Kimble serving as sideline reporter.
Editor’s Note: Top photo  shows the BHS captains for the Washington game, second photo is of the defense awaiting a snap. Third photo is of J.D. Love and the bottom one is of Cam Cole.