By Connect-Bridgeport Staff on November 27, 2020 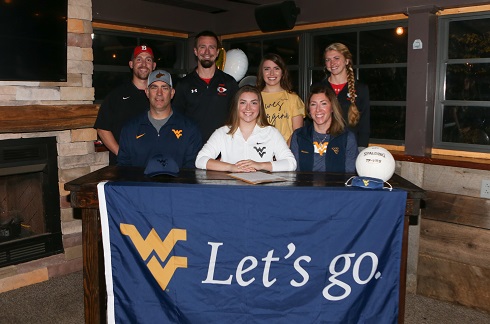 Emma Dukate (Sylvania, Ohio), Kamiah Gibson (Medina, Ohio), Shea Hefner (Bridgeport, W.Va.), Madison Page (Marietta, Ga.) and Brenna Tietz (Port St. Lucie, Fla.) committed to WVU in early November as part of National Signing Day and will join the Mountaineers next season.
“I’m very excited for the 2021 class to join our program,” Sunahara said. “We have a group of players coming in that will complement the culture that we have been building. They all have the potential and ability to make an immediate impact on our program, and we see a bright future for them to compete in the Big 12.”
Dukate comes to Morgantown from Sylvania, Ohio, where she played for Chad Rutkowski at Northview High and Darien Bandel at Legacy Elite Academy. The 5-foot-6 defensive specialist is a two-time all-league and all-district second team honoree. Dukate was named a team captain her senior year and helped the Wildcats win their first district title since 1997, earning All-Ohio recognition. She also landed on the 2020 Under Armour All-America Watch List, as well as the 2019 American Volleyball Coaches Association (AVCA) Phenom Watch List.
Additionally, Dukate finished her high-school career with 934 digs to average 3.60 per set. She also helped her club team place fifth at the 2020 AAU Junior National Volleyball Championships.
“Emma is a defensive specialist with libero experience at her high school and club,” Sunahara said. “Her ability to protect the court in serve receive and on defense will help make our ball control better.”
Gibson joins the Mountaineers out of Medina, Ohio, where she competes for Kara Joyce at Buckeye High and Meredith Rice Gromala at AVC National Volleyball. The 6-foot-1 setter was named the 2020 Ohio High School Volleyball Coaches Association (OHSVCA) Division II District Player of the Year as a senior.
She completed her four-year career with the second-highest total in Medina County history at 2,087 assists and led the Bucks to their first district final since 2010. Prior to the district championship, Gibson amassed a school and county postseason-record 54 assists in rallying Buckeye from a two-set deficit to beat Keystone in the district semifinals. Gibson will leave Buckeye as the program’s career leader in assists.
She is a four-time all-district nominee, landing on the first team twice, as well as a four-time first team all-conference honoree. Gibson, a three-time team captain, was awarded the team’s Offensive MVP award as a sophomore, followed by the team’s MVP award her junior and senior seasons. She also earned the Top Scholar Athlete Award four years in a row.
“Kamiah is a setter with high-level playing experience,” Sunahara said. “She plays for one of the best clubs in the country and knows how to put her attackers in good scoring situations. She has the tools and athleticism to contribute right away. Her in-game decision making will only help our offense excel in the Big 12.” 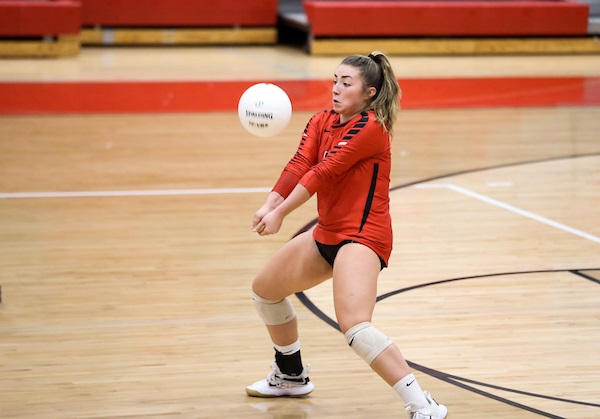 Hefner, a native of Bridgeport, West Virginia, played for Grant and Ali Burton at Bridgeport High and competed for Nancy Wheeler at Catz Volleyball Club. The 5-foot-6 defensive specialist is the program’s career leader in digs (1,273), kills (1,566) and aces (330).
A four-year starter and two-time team captain for the Indians, Hefner earned second-team all-state honors as a freshman and sophomore and first team all-state recognition as a junior. She also was a three-time first team all-conference and first team all-county member.
Hefner helped her team claim its first state volleyball title in program history at the 2018 West Virginia Girls Volleyball State Tournament. She also led the Indians to another semifinal appearance at the state tournament her junior year, earning a spot on the all-tournament team for the second consecutive year.
Hefner was named the BB&T Player of the Week five times throughout her high-school career. She also received the 2018 WVSSAC Academic Achievement award as a sophomore.
Additionally, Hefner was a member of the 2018 track and field team that finished as runner-up at the state meet. She also has been a member of the USA Ohio Valley Regional Volleyball squad for 12 seasons.
The daughter of Chad and Jennifer Hefner, she intends to enroll in university studies at WVU. Of note, her sister, Payton, currently plays volleyball at West Virginia Wesleyan.
“Being raised in West Virginia, I understand what the true meaning of being a Mountaineer is, and it is something I take a lot of pride in,” Hefner said. “I have been watching WVU volleyball for as long as I can remember and having the opportunity to compete for my home state’s school is a dream come true. I love the energy and competitiveness of the team and coaches, as well as the diversity of majors and opportunities that the University has to offer.”
“Shea is a local product that can make a huge contribution to our ball control game,” Sunahara said. “She has had experience playing as a defensive specialist and libero at her high school and club.”
Page is a 6-foot middle blocker from Marietta, Georgia, where she played for Joseph Auriemma at Kell High and Kelly Audia at A5 Volleyball Club (17-Kelly). The two-time team captain finished her high-school career with more than 500 kills and 250 blocks, ranking No. 2 regionally and No. 48 in the state for total stops.
“Madison will come to our program with a great deal of athleticism,” Sunahara said. “She will bring a wealth of ability as a middle hitter and blocker. Her strong and efficient movement along the net will add value to our program offensively, as well as defensively.”
Hailing from St. Port Lucie, Florida, Tietz will join the Mountaineer roster as a 6-foot-3 right-side hitter. She played for Christy Quigley at Fort Pierce Central High, racking up more than 700 kills and 150 blocks in her high-school career. She led her team to back-to-back conference championship titles as a junior and senior (2019-20) and helped the Cobras win back-to-back district titles her sophomore and junior year and finished as the runner-up her senior year.
Tietz is a two-time all-state and all-area selection, landing on the TCPalm All-Area First Team her junior year. She also was a first team all-conference member in 2019.
Additionally, Tietz earned mention on the Under Armour Phenom List twice (2018-19) and landed on the 2020 Under Armour All-America Watch List.
“Brenna will add versatility to our offense,” Sunahara said. “She is a player who can play at both pins. She will add physicality to our front line, and her passion and dedication will help her to make an immediate impact on our program. Her openness to take on any role, as well as being a six-rotation player, are great contributions that she brings to our program.”
For more information on the Mountaineers, visit WVUsports.com and follow WVUVolleyball on Twitter, Instagram and Facebook.
Editor's Note: Photos of Hefner by www.benqueenphotography.com