By Jeff Toquinto on September 19, 2021 from Sports Blog

For those thinking they saw a familiar face along the sidelines two Friday ago when Bridgeport battled Liberty in football, they did. Former Indians Coach Bruce Carey is once again manning the sidelines.
And he’s having a good time with it.
“I’m really enjoying being back and working with the kids,” said Carey. “The only frustration is the same frustration I had when I left Bridgeport and that’s being in a golf cart and use my walker and cane. It’s frustrating because I have to explain everything verbally instead 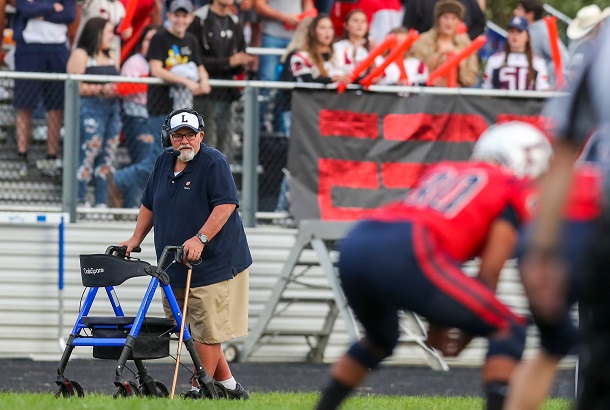 of showing someone.
“There is one thing for certain about being back in coaching,” Carey continued. “It’s better than sitting around the house all the time.”
As a refresher for those who may not remember why Carey uses a golfcart, a walker, and a cane to get around, you have to go back to after the 2008 BHS football season. Waking up one morning unable to walk and thinking it had to do with ongoing back pain, Carey got more than a serious diagnosis when he arrived at United Hospital Center.
That same day he learned he had Spinal Arteriovenous Malformation, which is also known as an Artery Vein Malfunction (AVM). Often referred to as a “spinal cord stroke,” AVMs are found in less than 1 percent of the population. His doctor at the time said a spinal one was 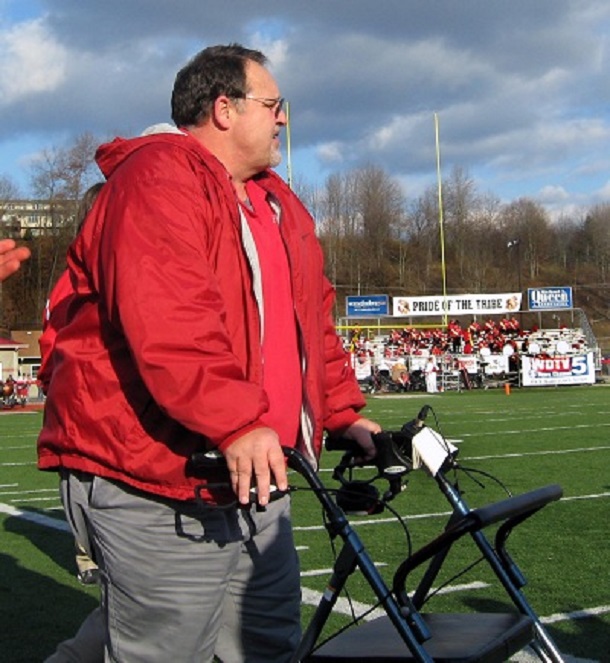 rarer.
“They’re so rare in fact, that there is no consensus as to how common they really are. Definitely less than one in 100,000,” Dr. Vince Miele said back in 2014.
He had surgery the same day. The surgery was a success, but the prognosis right after was not good – it was anticipated he would not walk again and be confined to a wheelchair.
As we know, Bruce Carey beat the odds. Beating the odds, however, was not easy.
Incredibly, as he battled through rehabilitation, Carey decided to return to coaching and teaching. There was no need to tell anyone he was in pain – he wouldn’t have done it regardless – but anyone close to him could sense it.
Yet, he coached the Class AAA Indians to the semifinals in his last season with the Indians, bowing out to the eventual state champs in the only close game the state champs had in the postseason. When it was over, he told his team he had to get himself better and he was stepping down.
From there, most know he eventually returned to coach Robert C. Byrd to its most successful seasons ever in football. What many do not know is he also had a stint assisting at Liberty one other time under current coach A.J. Harman.
“I went over to help when (my nephew) Justin (Carey) started for about a year and a half. I was breaking down film, watching practices using my walker. The second year was a full year as an assistant and got up in the press box during games,” said Carey. 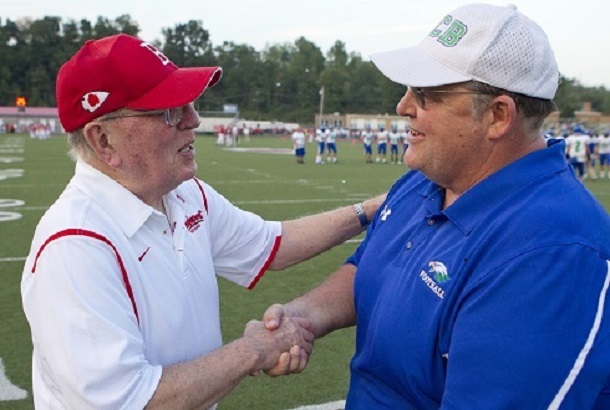 Ironically, it would be his nephew’s coaching that led him back to Liberty. This year, Justin Carey applied for and received one of the assistant positions on the staff of new head Coach Tyler Phares at BHS. That left a position open at Liberty.
“They were looking for a line coach after Justin left, and he A.J. treated me well before and he wanted me here,” said Carey. “I wanted to do this, but A.J. is the right guy because he’s not just a good coach, he cares about the kids, and makes them see the big picture. He’s a good leader who I like personally and professionally.”
Because of that Carey is back. Despite a young Liberty squad struggling this year, Carey said he has enjoyed just about everything the 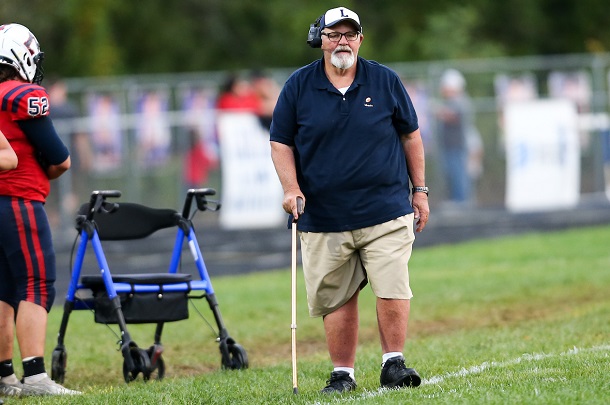 season has offered. The one exception has been coaching during COVID.
“I’ve never dealt with anything like this as a coach. We had an outbreak in August and there was a time where when we actually got to practice, we had five coaches and seven players, which is an issue when you only have 30 to begin with,” said Carey. “I felt like I was coaching eight-man football.”
Even with that, Carey is glad to be back. He said coaching at his alma mater, where he played for current BHS volunteer assistant Tom Hilton back in the 1970s, makes it even better. And this time, it will not be short term.
“I’m planning on staying for a while; at least five years. I want to be like Tom Hilton when I grow up,” said Carey with a laugh.
While he plans on staying around, he also was quick to answer about taking on chores of becoming a head coach again one day.
“I’m happy where I’m at and as an assistant you get to work with the kids and the kids here, like everywhere I’ve been, are great to be around,” said Carey. “My head coaching days are over.”
Editor's Note: Top photo and bottom photos show Bruce Carey on the sidelines coaching at Liberty High School this year, while the second photo - courtesy of the BHS Journalism Department - shows Carey in his final season at Bridgeport. In the third photo, Carey shakes hand with another former Bridgeport Coach, the late Wayne Jamison, prior to a contest when Carey was coaching Robert C. Byrd. All photos other than Carey coaching at BHS by Ben Queen Photography.