From the Bench: From Having Good Hands to Being in Good Hands, Sam Romano Talks Heart Transplant

It was about this time last year Bridgeport High School Sam Romano was fully acclimated with a new situation on the football field. He 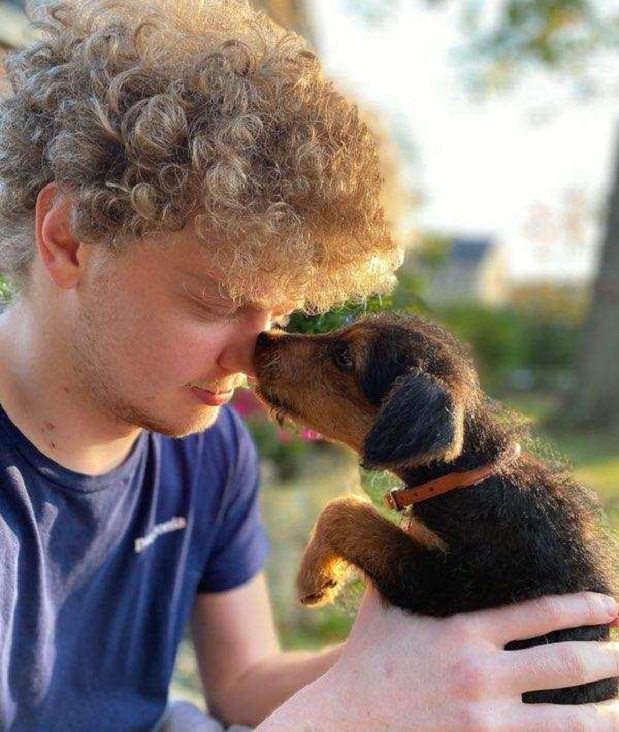 was on a new team at a new school and he was already making a difference in what would be a championship season for the Indians.
A year later, he is getting acclimated to some new things as well. And what he probably wants you to know about first is he has got a new dog. A type of terrier mix, and a little bit hyper, named Luigi.
“We got a new puppy last week. We figured it would be a good time to train a dog since we have to stay a little more isolated,” said Romano.
The reason for the isolation is partially because of COVID-19. The key reason to be a “little more” isolated is that as most of you already know, Sam Romano is getting acclimated to something else – a new heart.
It has been less than two months since Romano has had a new heart. He underwent the transplant surgery on August 18 at Ruby Memorial Hospital in Morgantown. That came less than two months after graduating from high school and less than two weeks after signing to play baseball and football at Glenville State College.
While Sam is isolated, he does get out at times. And for those who have seen him or may have social media contact with someone in his family and seen photos, you could not tell the difference. He still has a glowing, youthful smile and a head of hair (more on that later) that has legitimate street credibility.
To see him, you would never know. Surprisingly, Romano said he does not feel too bad with everything factored in.
“Physically, outside of some muscle loss and a little fatigue, I feel pretty normal. I’ve been trying to build up slowly,” he said. “Walking and 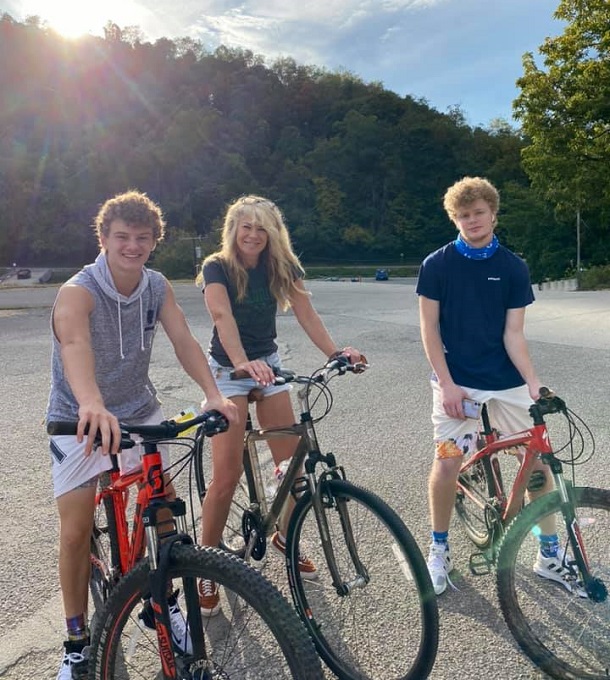 biking a little further each day. I just got cleared to drive so I’m excited about that.”
That does not mean everything is the old normal. No one who has dealt with what Sam Romano has dealt with sees their old normal. They, and Sam is a good candidate, will see a new normal and a whole new lease on life.
Along with getting himself stronger, Romano must deal with medicines and other medical issues. That is the norm for transplant patients, and even that is better than what some may expect. In fact, he is staying busy thanks to the work of his medical team.
“My doctors and the whole transplant team have streamlined my meds to twice a day and we keep track of my vitals, other than that, it’s pretty normal. I just built my first PC and have been streaming, playing Xbox, and exercising. I’ve also been cooking a little.”
As Sam moves forward, there’s part of the past he understandably does not like to put much thought into. And that is going from a picture of health to in need of new heart – and getting one – in a relatively narrow time frame.
“I really tried to not think about it. It happened so fast. That was a good thing,” he said. 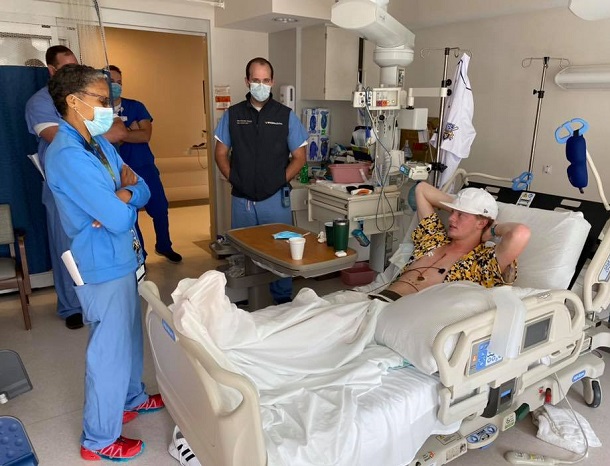 There were some other good things. His family, in particular his mother Beth and his father John, were relentless and never-ending in their support to let him know he was in good hands - which from football last year is a genetic trait. Sam Romano knows it, and he has no problem letting everyone else know just how important his parents were (and continue to be) in the entire process.
“My mom and dad kept me from going stir crazy in the hospital. From the second we got there, they helped me make a lot of tough decisions. Because I just turned 18, I could still be considered pediatric, so they (WVU) let my parents stay with me,” said Romano. "Since I’ve been home, my mom has waited on me hand and foot, helped manage my meds and appointments and exercises with me every day. Both my mom and dad work to push and motivate me and I’m thankful for them.”
That is not the only ones who have helped Romano maintain a positive perspective in an ordeal that would try the psyche of just about 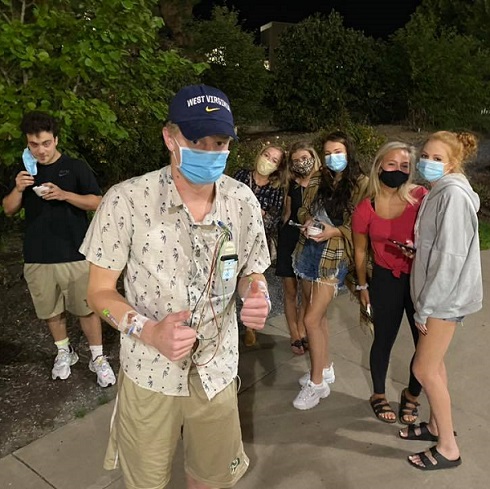 anyone. He also got never-ending support from his social circle
“My friends helped by checking in on me all the time. I had a lot of screen time through this. I used it as a distraction I suppose,” said Romano. “Some friends came for visits in the parking lot, socially distanced of course. Some sent food. Some sent blankets. They were all great. When I came home a few were waiting as a surprise.”
Along with family and friends, Sam Romano and his family were besieged by well wishes from thousands of people they have do not know and may never meet from social media messages, to texts and every other way imaginable. The well wishes and prayers came in droves.
“It was actually a little overwhelming that amount of people that reached out. I just hope everyone knows how much myself and my family appreciate all the prayers,” said Romano. “God really is good.”
Sam Romano will be the first to tell you the medical team at J.W. Ruby Memorial Hospital are good too. He had nothing but good things to say about the entire team – the doctors, the nurses, and all involved – who handled his care.
“The nurses were amazing. My doctors and surgeons were amazing. So much so that I named my dog after one of the surgeons. Dr. George Sokos, Dr. Vinway Badhwar, Dr. Luigi Lagazzi-Garos (for whom the dog is named and about as high a compliment as any human 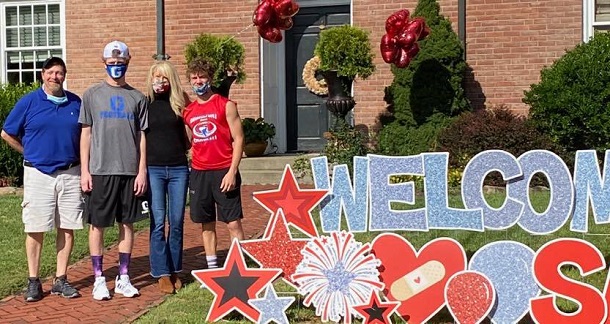 can receive), Dr. Marco Caccamo and Dr. Chris Bianco continue to take great of me.”
He also had a shout out for a Bridgeport High School alum, Class of 2002. That alum, who is the nurse manager for the CVICU at the West Virginia Heart and Vascular Institute inside of Ruby, is also a former state championship Indian football player.
“I also can’t thank Chris Lindsey enough. He really made us feel at home,” said Romano.
While back in his regular home, there is one thing Sam Romano is not doing. It involves something a lot of folks commented on when seeing photos of him in recovery following his surgery. His curly locks that tower above his head, which mom admittedly would like to see trimmed up a bit, is plowing forward.
“Hairdo is here to stay. I’m growing it out as long as possible to see if it will ever grow down and not out,” said Romano.
Part of me wants to tell Sam Romano it will not grow down and will just grow out, and not just from my own youthful Italian-headed experience. Rather, the words down and out just do not go with Sam Romano. He has already shown us that.
Editor's Note: Top photo shows Sam Romano with his new dog Luigi, while he's shown biking with his mother and brother, while in the third photo he's shown post-heart transplant talking to members of the WVU medical team. In the fourth photo, he meets with some of his friends in Morgantown outside, while he's shown below on the day he came home and the sign that greeted him. Photos courtesy of Beth Romano.