ToquiNotes: A Meadowbrook Mall National Chain Too Good to be True Brings the Goods in Short Existence

It was a little harder to tell back in the print media days – prior to most news being posted online – when you had a big story. Then again, there were a few times you did not need the finite numbers of the internet to let you know you were on to something big.
Back in March of 2006, word had broken that one of the trendiest retail chains was on its way to the Meadowbrook Mall. With my news hat on, I was thrilled to get the news first. With my fiscally conservative self, well, there was a part of me really happy and a part of me not 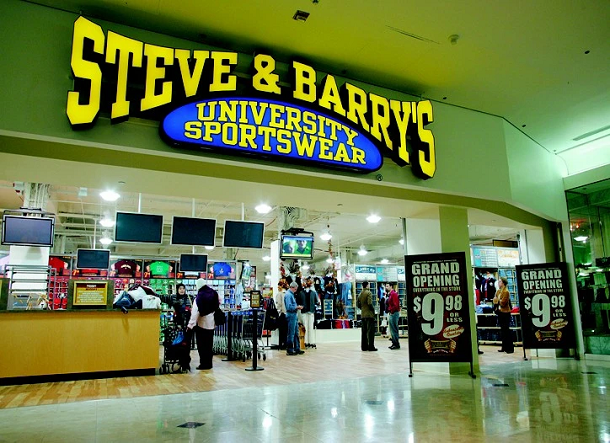 nearly as happy.
We will get back to that.
What transpired that day when I checked permits as I often did back in the day was to see a smiling Randy Spellman. Spellman was the former Community Development Director at the city, and he had some really good news.
Spellman was pouring over plans. And before he could tell me what it was that had him happy, I saw it printed on the plans.
At the top, somewhere near the name of what was like the architects/engineer’s logo were the words “Steve & Barry’s.” When I saw it, I knew the reason for Spellman’s excitement for what would be the fifth mall store in West Virginia.
For those that do not remember, Steve & Barry’s sold college apparel – and lots and lots of it. The reason for selling so much of it was simple – everything the store sold was $8.98 or less. Eventually, it went up to $9.98, but for most of the time it was at that $8.98 price line.
Want a nice quality t-shirt from just about any college team in the land? $8.98. Need a hoodie? $8.98. Even jackets, flip flops, and other assorted items $8.98. About the only thing I can ever recall being less than high quality were the pull over sports jackets. Even in that case, they just were not at the same quality you might find for one selling for $75, but they were still worth every penny of that $8.98 sticker price.
I knew about Steve & Barry’s before it made its way to the Meadowbrook Mall. Actually, for at least the year prior my wife and I had made a random trip to the Grand Central Mall in Vienna (Parkersburg as most believe) and found the store.
Not only did I grab myself more than a few items, since we were Christmas shopping, I loaded up on gifts for the family. I was big-time happy about getting high quality clothing for myself and getting high-quality gifts for the family at a fraction of what I would usually pay.
That Christmas, more than one family member that got goods from Steve & Barry’s thought I had “gone overboard” with gifts. In reality, I probably spent a little bit less, but there were more gifts than ever before.
It all seemed too good to be true. Ironically, this “too good to be true” store incorporated decades before coming to Bridgeport – in 1985 to be exact. By the mid-2000’s, the business was doing roughly $700 million in sales and had more than 2,000 employees.
The best part? The business was formed by a pair of teenagers – Steve Shore and Barry Prevor, this Steve & Barry’s. Their initial shirts cost $1, and they sold them at flea markets before branching out into college towns.
The success led to eventually landing into the mall scene. By 1998, they were in their first mall in Detroit. By March of 2006, the plans were in place to come to the Meadowbrook Mall. On April 6 of the same year, according to the Bridgeport Finance Department, they were in business.
The good news is I no longer had to go to Parkersburg or the Towne Center Mall in Charleston for my Steve & Barry’s swag. The sad news, and the one thing that bothered me, my secret for Christmas gifts were out and lasted a grand total of two years.
As it would turn out, Steve & Barry’s Meadowbrook Mall run would last just a little bit longer. Again, thanks to my friend Rebecca Deem at the city finance department, they were done by March 31, 2009 and the space that once held Carmike Cinemas was vacant one again.
For roughly three years, Meadowbook Mall had a sports clothing store – as well as eventually adding other clothing items that featured everything from business logos to movie and comic book logos – that were not just cheap but did not fall apart after one washing. According to one online article, they offered more than 1,000 t-shirts thanks to having more than 350 merchandise licenses from colleges.
To say business was booming would be an understatement. And they were good for malls because they drew heavy foot traffic. To my recollection, Steve & Barry’s was always packed as the original items – and new, slightly higher priced items such as tennis shoes and women’s clothing – were still the main draw and still under $10.
Yet it would all be gone soon after arriving in Bridgeport – and nationally as well. Problems started in July of 2008 when the company filed for Chapter 11 bankruptcy. There was a myriad of issues, most notably that their business model could not be maintained at the prices being offered.
Still, there was a buyer in August of the same year at a cost of $168 million. The new owners – Bay Harbour Management and York Capital Management – ended up filing for the same bankruptcy protection in November of 2008.
There were 173 stores remaining. Meadowbook Mall’s store was in the mix. However, all of the stores were set to close and began liquidating items. By the end of 2009, they were all gone.
Although I took advantage of the last days of the store, which featured even cheaper prices, I was saddened. Steve & Barry’s was one of my all-time favorite stores, and had it lasted as long as say a Montgomery Ward, it may have ranked number one.
Unfortunately, I found out the old cliché was correct. Steve & Barry’s was, in fact, too good to be true.