ToquiNotes: Building with Storied Past, City Ties and an Impact on Thousands Meets End with Demolition

By Jeff Toquinto on August 17, 2019 from ToquiNotes

I still remember the day I walked out of the building in 1992. It was cool and the breeze was hitting my face and as I exited a half a decade of stress fell from my shoulders.
The building I walked out of was the Colonial Village Building in downtown Clarksburg that is situated on the corner of Main Street and Monticello. The portion of the building I walked out of was the Clarksburg Campus of what was then Fairmont State College.
That morning was the day I took the last final, of my last class in college. Unlike most of my friends and many that read this, college was a miserable experience for me for reasons better suited for another blog or discussion for anyone wishing to buy me a beer. 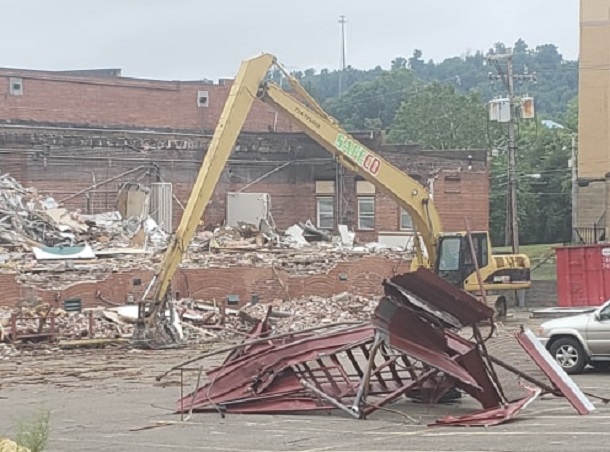 I bring this up not to get that free beer, but because of the building itself. For those of you that haven’t driven that section of Clarksburg lately, the building is being demolished. I’m not quite sure why or if there’s a plan for the property, but it’s basically now a thing of the past.
While this blog will focus on the time frame when Fairmont State University was there before it relocated to the brand new Gaston Caperton Center in downtown Clarksburg, there is some pretty unique history behind the building. Although I don’t have the dates of when the structure was built or a list of all the businesses that were there, my mother and my good friend and Bridgeport High School alum Al Newton Cox helped me out with some of that history that I didn’t recall.
According to Cox, in the late 1950s and the early 1960s, the first floor of the building was host to an A&P Grocery Store. Cox said the store had a Bridgeport tie.
“(The) store was managed by Alvin Rule who lived on 5th Street in Bridgeport. I was in school with his daughter Sharon at Bridgeport High,” said Cox.
I was born in 1968. From my earliest memory, I do not have any recollection of that property being a grocery store so when my mother told me and Al seconded it, I was a bit surprised. Perhaps it was closed prior to 1968 or prior to me being able to recollect things (which is starting to become a chore for any time period).
Mom also told me something else I had no idea existed in the building. Again, Cox was quick to point out her memory was spot on.
On the second floor, where I took most of my classes when utilizing the Fairmont State facility in Harrison County at the time, there was a 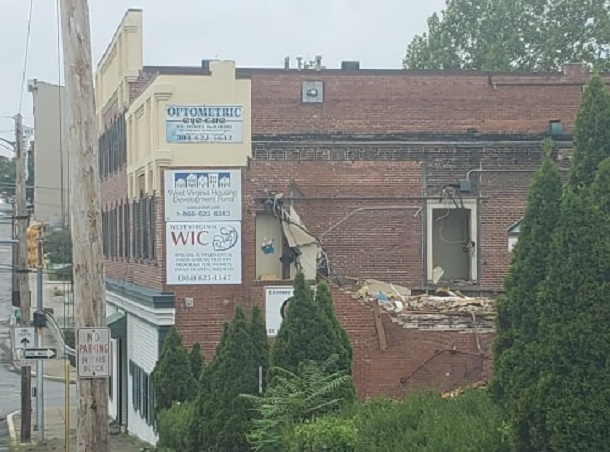 Maiden Form Brassiere Company. It wasn’t just a company selling an item, they had – as Cox described – “many local women” working there and manufacturing brassieres right here in Clarksburg.
The building housed many other businesses right up through its last days. There was Ernie Grandinetti’s hair business, Art by Blaine Berkley, WIC was located there and my first of several State Farm agents had a business inside. My apologies if I’ve spelled any names wrong and apologies for what I’m sure are numerous businesses I’ve left out.
Cox added that the late Louis Bonasso, who owned and operated the Kentucky Fried Chicken franchise in the area, owned the building. He was pretty sure it was eventually sold by the Bonasso family.
To me, the building was Fairmont State. I didn’t take all my classes there. In fact, I didn’t even take a majority or even a third of them there.
Yet, the building allowed me to find some balance as a youngster that was struggling. As I worked a part-time job that often was 40 hours a week and then a full-time job that was more than 40 hours per week and tried to run a household as a novice, the building downtown provided me with options on time.
I could take evening classes and afternoon classes on Tuesdays and Thursdays and avoid having to go to Fairmont five times a week as a commuter. I could take what today would be considered on-line courses – TV courses – and take my tests at the Clarksburg campus.
Perhaps the best move was switching my counselor to Blair Montgomery, who along with David Young ran the facility to meet the needs of many non-traditional students, students who weren’t sure if college was for them, some simply taking classes as required and others like me who had to work certain classes needed around a regular work schedule. Montgomery’s presence to work with me on the path toward graduation was one thing I realized was greatly important to becoming the first in my immediate family to get a degree.
I imagine Montgomery has no recollection of me because he simply dealt with too many students to recall them all. I do, however, regret not telling him how important he was simply by being accessible and understanding to my needs.
The thing is, I’m certain I’m not alone. I’m betting there are hundreds if not thousands of people right here in Bridgeport and thousands more in Clarksburg, Harrison County and beyond, that were part of that building.
I’m certain lives were shaped, and futures were molded in that building that is now nothing more than dust. It truly was significant to me and I’m sure to others.
The building may be gone, but its impact remains. It can be seen in the careers of individuals and the families they’ve raised across this country. The wrecking ball can never touch that.
Fare thee well Colonial Village. You were an asset to the community.
Editor's Note: Photo shows the Colonial Village building be demolished earlier this month.