By Jeff Toquinto on March 21, 2020 from ToquiNotes

This morning would typically be the start of a festive morning for Harrison County native Sarah Folio. She would be out in the streets for a peasear, which is a walk, or perhaps partaking in tadeo, which is a tradition of having drinks at lunch hour that carries into the night as part of her community’s socialization process. 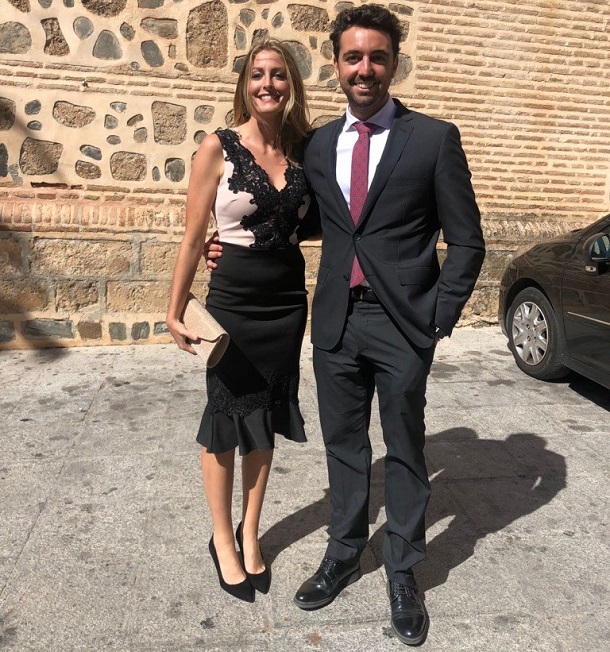 It would have come after a work week where the 2010 Robert C. Byrd graduate would work evening hours. Although the norm is a workday that may start as early as 8 a.m. where she is, both she and her boyfriend Pablo are self-employed, which leads to varied workdays that see most hours later as opposed to earlier.
For those wondering, Sarah Folio’s community isn’t nearby. It’s not in another state. Folio lives in Europe and has for the past five years.
Sarah Folio is a resident of Spain. She lives in a town called Murcia, which has 500,000 residents. She said it’s 50 kilometers from the Mediterranean Sea with a climate that is perpetually sunny with mainly mild and warm temperatures that become an “inferno” in summer. The climate lends itself to people being out and about and taking advantage of the nearby beach or hiking for those who enjoy mountainous terrain.
“Murcia is a city I would recommend to most people who are interested in getting to know the authentic parts of Spain,” said Folio. “The 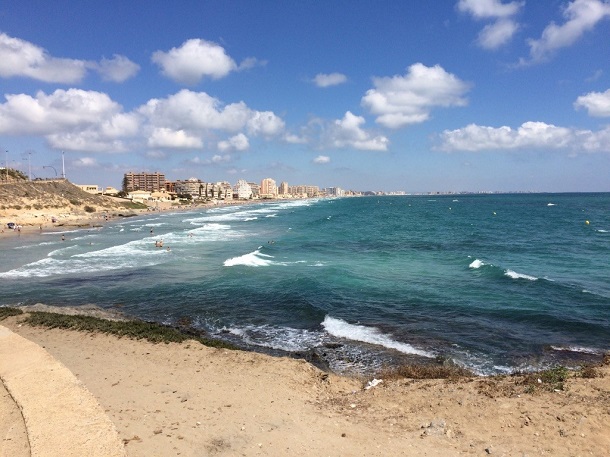 people are like West Virginia’s; inviting, loving, and friendly, making me feel right at home.”
Home is still a world away, even as an international flight makes it easier. Normalcy, however, is something Folio, her boyfriend and her cat Luna no longer have the luxury of.
Folio and the half a million people calling Murcia home are amid the Coronavirus that has ravaged Europe. Her situation is like other European countries and has some of the features of what’s already taking place in the U.S.
“Currently the entire country is in lockdown and obliged to stay at home. Travel bans have been implemented and the borders have been closed. We are supposed to be in this lockdown for two weeks 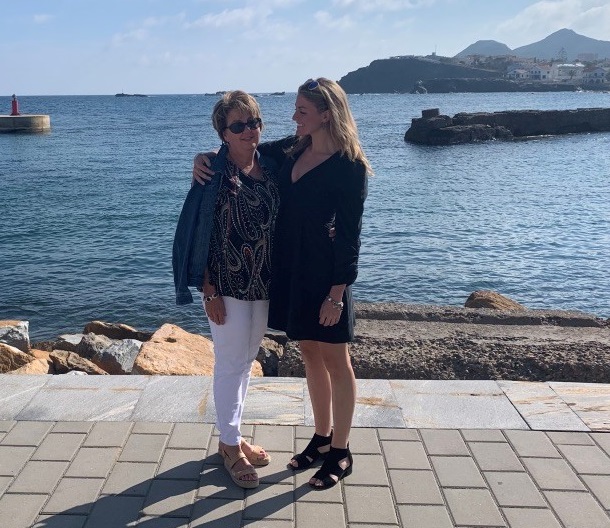 and we are currently on day three,” said Folio on Tuesday. “However, I believe this could be longer as in China they are still not in school and their daily life has yet to come into full swing. Also, big events like Champions League and important festivals have been postponed or rescheduled for October and December.”
Folio has no regrets of being in Spain. The 27-year-old never planned to be there; but it happened as a result of her time at West Virginia University
“To be honest I moved to Spain to be with my boyfriend who I had met during my junior year at WVU. We had maintained a long- distance relationship during our senior year and we knew for us to make it work someone would have to sacrifice the move,” she said. “At that time, I was pretty unsettled and was more than ready for a change and Spain was that opportunity. Although I made this decision with hardly any Spanish language education, I felt confident and 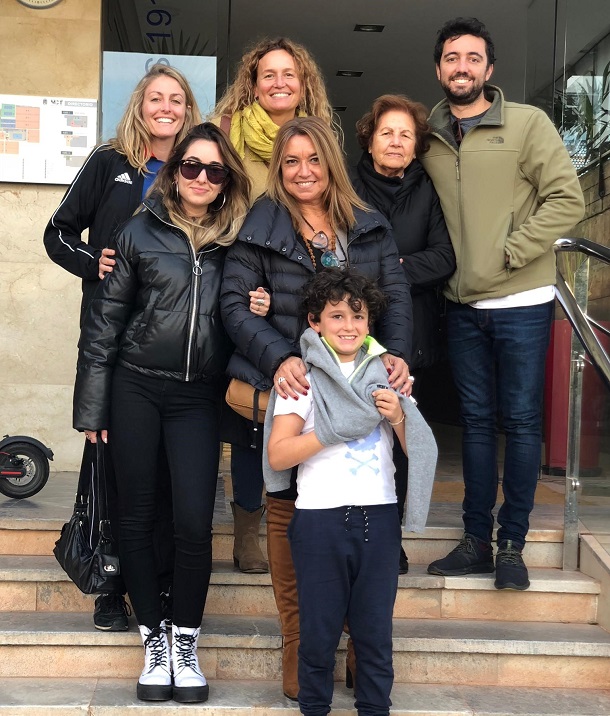 reassured in my decisions once I became acquainted with his warm loving family and quaint city.”
Getting there wasn’t as simple as getting a passport. Folio needed a VISA and she discovered an English teaching program that offered one. The same program also offered a monthly stipend and health care.
“I signed up to do the program and got accepted and made the move. I did this job for two years then I turned to online teaching with Chinese students called VIPKID,” said Folio, who will celebrate a birthday at the end of April. “This is my current job where I can work from home and still play football semiprofessionally. I also teach English classes to businesses and Spaniards, as well as create English materials for Languages Schools across Spain.”
It was through that job where she first learned of the Coronavirus. It took place in January where she was working with her Chinese students.
“At that time, it was nearing Chinese New Year, their biggest holiday of the year and when most Chinese begin travelling that the government had cancelled all festivities and began implementing travel restrictions,” said Folio who has a Bachelor’s degree in Communications from WVU and a Master’s in Sports Management she earned while in Spain. “Shortly after they also cancelled school 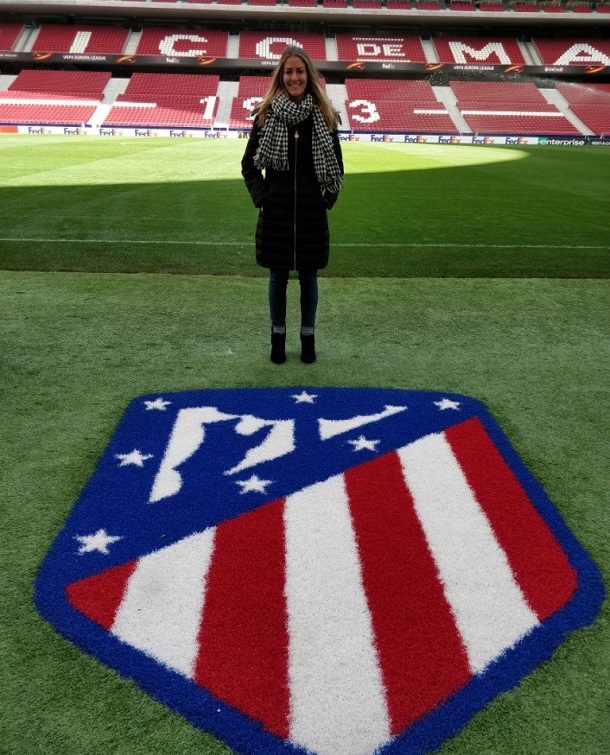 and started taking more preventative measures.
“From this point forward, I started becoming pretty invested in what was happening in China and the volume at which this was spreading. However, I never in a million years truly thought the same situation in China would actually become a reality for me a few months later,” she continued. “Spain started to feel the repercussions of this pandemic about a few weeks ago (early March) when Madrid started getting lots of cases and how quickly it was spreading to other regions and cities. Big events started cancelling as well as leagues, and reunions. I started to learn that people who had been in Madrid for weddings or conferences had returned back to Murcia and tested positive for the virus.”
Once that happened, things gradually changed. Activities were restricted at first and then it was only a short time later residents were “advised” to stay home. Right now, it’s mandatory as Murcia is on lockdown.
“Anyone out could be fined anywhere from 600-3000 euros. People can only go out to buy food, walk their dogs, and that is it. If you go to buy food you need to show the receipt to the police if they catch you out,” said Folio. “Police are patrolling the cities to make sure people are doing their civic duty.”
And once in the grocery stores, individuals stand 20 meters apart with only one person entering the store at a time. While that’s not great news, Folio said the Murcia region has the smallest number of Coronavirus cases in the state; believing as of Tuesday it was around 100 cases. 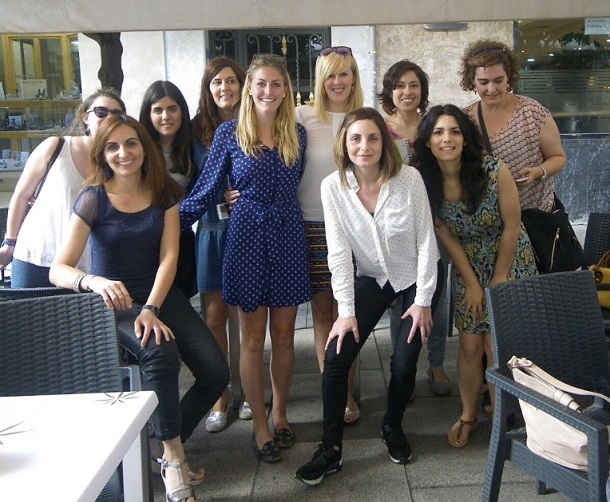 “I do not know anyone personally who has the virus,” said Folio.
For now, Folio is making video calls to friends and family, reading, enjoying board games, cooking, working out at home, working at home among others and even taking time to “laugh at the memes or the craziness of the situation.” And then there’s this.
“We also coordinate neighborhood sing-a-longs or applauses for the medical workers who are working endlessly for their patients and the well-being of the country,” she said. “These are coordinated through WhatsApp’s that are forwarded all across the platform.”
It’s what she does in a place she now calls home. It’s soon to be five years in Spain away from her mother Lee Ann and father Joe as well as siblings Andrew, Alex and Chris Folio.
“This is where my life is even though I would love to have my family with me in this situation. Even if I would want to go home borders are closed and I would have to go through rigorous screening,” said Folio.
For those at home, she has some advice. From someone who’s in a situation this country could very soon face, perhaps it would be wise to listen.
“I just ask that each person do their best in curbing this pandemic by staying home and really taking the severity of the situation to heart,” Folio said. “I know that it is very challenging to stay at home but the attitude of beating this epidemic really starts with each individual doing their civic duty to protect not only themselves but the rest of society.
“Please be mindful at how hard this situation may be for the elderly, disabled, medical workers, the sick and children. Help your neighbors and try to come together as a community. Lastly remain positive and hopeful that during this storm plenty of good will come out of this,” she continued. “Use this time to achieve some of the countless things you never had time for and be with your family. Lastly, if possible, please continue to support small business as these months will be critical for them. As an American I am confident we will prevail and come together in some of the hardest times. I am watching from a far in hopes the U.S. can continue to be the example I have known them to be. God bless everyone back home and know this too shall pass.”
Editor's Note: Top photo shows Sarah Folio and her boyfriend Pablo in Spain, while the second photo is a site not far from where she's at in Murcia - the Mediterranean Sea. In the third picture, Sarah's mother Lee Ann is shown visiting her daughter. Sarah is shown with Pablo's family in the fourth picture, while she's in Atletico de Madrid Futbol Stadium where her and her students were given a tour of the stadium in the fifht photo. The bottom photo shows Folio with her students enjoying a day of class outside. All photos courtesy of Sarah Folio.