By Jeff Toquinto on October 03, 2020 from ToquiNotes

It is not located in Bridgeport. Yet, as sure as I am typing this, there are not too many people above 40 from that city or who have roots to North Central West Virginia didn’t feel a twinge of nostalgia – and perhaps sadness – when driving through downtown Clarksburg in recent months.
It all stems from a demolition project and site preparation project. A needed project, yes, but the removal of part of the project, nothing more than concrete and tubing and some old mechanical stuff I imagine, was hard to see come down. 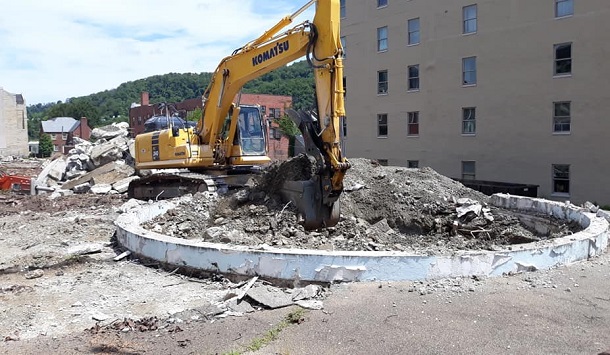 In fact, this item demolished was likely no bigger than your living room. Earlier this year, the process to demolish what was known at its opening in the 1970s as Union National (Bank) Plaza began.
The lot being demolished and cleared was substantial. It stretched along Second Street in Clarksburg from the corner of Main Street to Pike Street. Yet, there was that one area, that one small area, that was a unique little place where memories were made for so many people who stopped to take a break from whatever they were doing.
It is gone. The “it” I refer to is the old fountain that was situated at the plaza’s location on the corner of Second and Main Street. It was the place where performances took place, speeches were delivered, and countless lunches, walks, conversations, and just general reflection 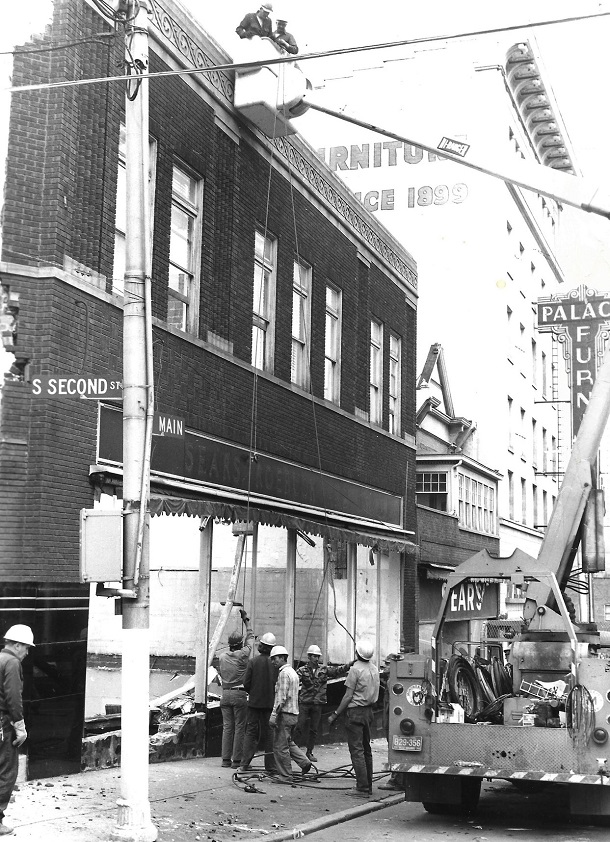 and happiness took place.
As I often have done when referring to Clarksburg history, I called my friend and 1960 Bridgeport High School graduate Al Cox. Usually, he surprises me with his knowledge on subjects only because it is nice to find someone who knows so much about so many different things.
On this one, however, I knew Cox would have the subject covered. The only surprise beyond tidbits he always knows was finding out just how related Al Cox was to that plaza and the fountain.
“The plaza was opened by Union National Bank in January of 1974 with access to the plaza on both Pike Street and Main Street and both sides were fully staffed,” said Cox.
Cox, who would retire from the Union National Bank and the company’s names it would later acquire, was there for the grand opening of the plaza. And he was not there working for the bank.
“I kind of owe the plaza to becoming involved in banking. If not for that, I might have ended up staying in radio and television,” said Cox.
Cox was doing dual media coverage at the time of the opening. He was working – and managing – WRGT FM out of the Robinson Grand and at the same time working with Mike Simons at what Cox believes (not 100 percent) was the old Teleprompter Cable Company in the downtown.
If not on the radio, Al Cox and Mike Simons would be doing a live news show with a little bit of everything, including sports and local news. 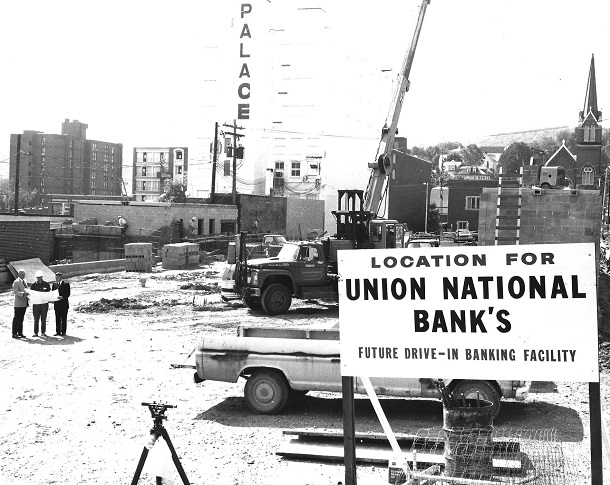 Those gigs put him there for the grand opening and ribbon cutting of the plaza that previously housed the Sears building in Clarksburg that was demolished to make way for it.
This was a state-of-the-art plaza. It had so many features, including the state’s first full-service ATM. It was a big deal, and Cox was there in a media capacity on day one. He would be there later for a long time in another capacity.
“A week after the opening, I was approached about joining the bank,” said Cox, who would go from that moment to becoming the Vice President/Branch Manager of the Clarksburg location that included the new drive through operation. “Because of my media work, the bank president (Al Reppert) wanted a marketing and public relations officer. The bank had a new facility and a big part of my mission was to utilize it for public events and functions.”
Events happened. They happened in droves. Cox recalls the Washington Irving Jazz Band, the West Virginia Wesleyan Jazz Ensemble, arts and craft shows, West Virginia Day Celebrations that even featured the late Senator Robert C. Byrd playing the fiddle, bicycle safety 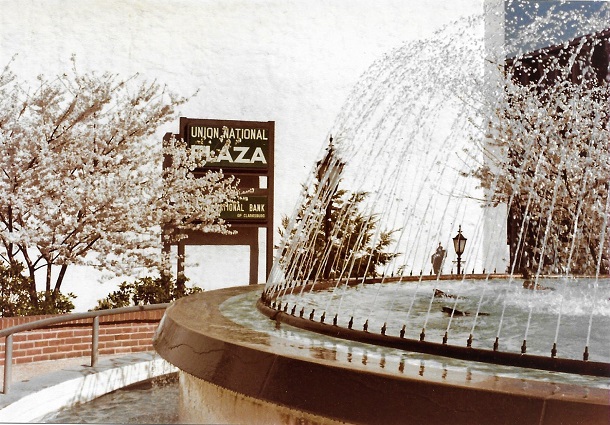 clinics and the airing of live television from the spot – including the once well-known regional band festival – were just some of what took place there.
“Al Reppert, as president, deserves so much credit because he was a visionary for creating such a beautiful thing. It was a bank situation in an area that looked like a park,” said Cox. “I used to joke it was detriment to banking because people would come downtown and think it was a park because that’s how beautiful it was.”
It was indeed a wonderful place. There were benches to sit on, even tables. There were Bradford Pear trees, Yoshino Cherry Trees, and other trees and flowers such as rhododendrons and daffodils.
“There was a constant change of color,” said Cox. “It was part of what made the plaza special.”
For me, and so many others, it was the fountain that was cherry on that special pie of the plaza. And it is the fountain that is the point of 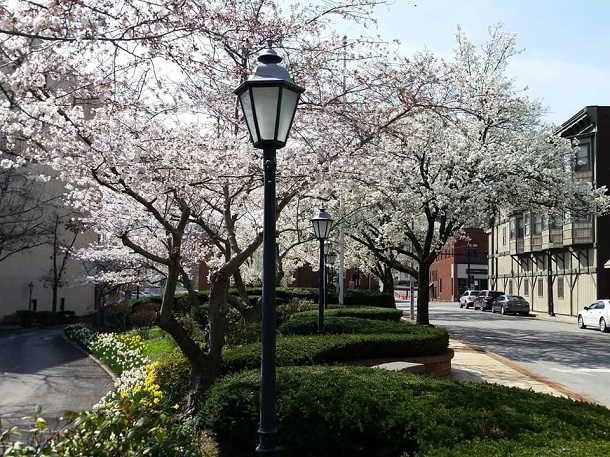 the blog.
Cox said the fountain, like just about everything else, was state of the art. It had two levels of pools of water and what he called “an apparatus” to change the shapes and formations of the water from elevating high to low with different effects.
“It would change shapes and it had different colors. At night it illuminated,” said Cox. “It was beautiful, and people would flock there.”
They did – for decades. People would eat lunch, stop to read a book and things like taking photos – wedding photos, class reunions, graduation photos – were done around the fountain. Some, like yours truly, would walk his dog in recent years uptown and let her run around the rim avoiding the droplets that would pop out at her.
There were also shenanigans that are part of the history. They are shenanigans that led to the fountain’s demise even before the banks closed shop. Cox called it “soaping the fountain.” And while many thought it looked cute and others thought it was funny, it was a problem 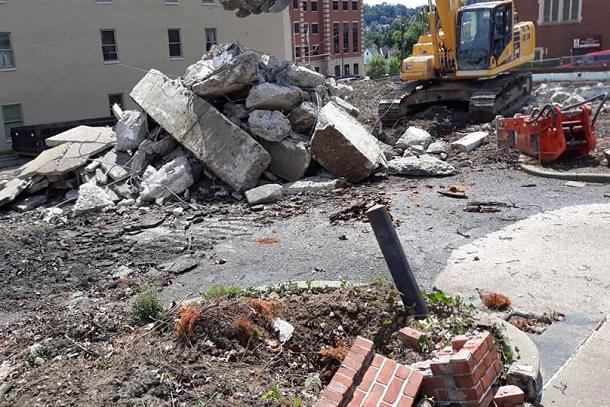 .
“It was actually an expensive problem. You had to take it down, clean up things and put it back up. It was not only expensive, but it was also very annoying,” said Cox.
Cox can also remember calls for other problems in the fountain. More than once, fish were left in the fountain, including big carp. Occasionally, a turtle would be part of the show. It was a frustrating, and Cox even admits sometimes cute, issue to deal with.
However, Cox who was so largely responsible for the plaza and the fountain, he saw in an intimate and personal way what others saw.
“Beyond those issues, it was well worth the effort to keep it in the downtown. We knew it was special,” he said.
Eventually things changed. The banks operations as it went from Union National to Bank One to Chase slowed down as it relied on foot traffic and local workers and with businesses leaving, including Dominion and Steptoe & Johnson that had a monstrous presence, the days were numbered.
Activities began decreasing as downtown Clarksburg suffered what so many other downtowns were suffering nationwide. The trees and 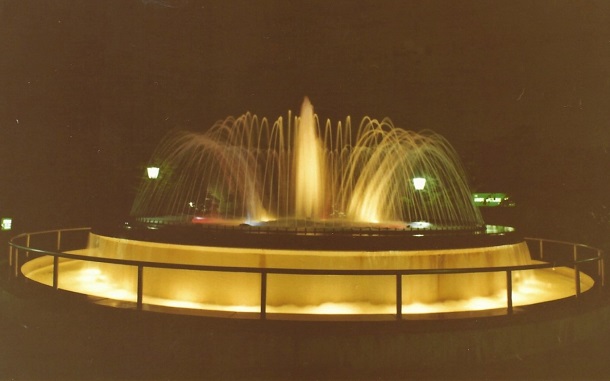 other beauty of the plaza were still there, but the foundation was deteriorating and even the water fountain, used by tens of thousands, was removed due to vandalism.
“The fountain was getting harder to maintain, even in my later years before retiring from the bank,” said Cox. “It was difficult to find parts and I knew a lot of expense would be needed to bring it totally back. It was sad to watch the fountain die and then parts of the plaza become an eyesore. I hoped it would be restored.”
Then, Cox saw what he figured was the end of the fountain. It was something only someone close to the project would know.
“They started phasing things out before closing the entire operation, but I had a feeling the fountain was coming to an end even before that. The fountain took a special paint to keep it looking good. When I saw it starting to peel, I knew they had given up on the fountain,” said Cox. “It was heartbreaking because I knew one of the most beautiful spots in the city wasn’t going to be there much longer. I felt the same heartbreak when they started demolishing the plaza and eventually the fountain.”
Amidst that heartbreak, Cox is pleased to see what is being done now on the property that shut down just a few years ago. The entire lot is cleared, a new building – a small post office – is already under roof, and improvements to the worn-out plaza are taking place with a new plaza. Ironically, the plaza that Cox was there to see open in 1974 had a small unmanned post office on it I’m betting most cannot recall.
“A change was needed and I’m happy to see things moving fast,” said Cox. “At the same time, there’s a touch of sadness about all that’s gone. I was glad to be a part of a place that produced a lot of memories for so many kids and adults.”
There were a lot of memories that even a wrecking ball cannot erase Al. In fact, there were a whole fountain of memories.
Editor's Note: Top photo shows the demolition of the fountain, while the second photo shows demolition of the old Sears Building making way for the Union National Plaza. A construction photo from the early 1970s is shown in the third photo and that is followed by an early photo of the fountain. In the fifth photo, the beautiful trees and immaculately trimmed shrubbery can be seen along Second Street. In the next photo, more demolition of the plaza is shown, while the lit up fountain in the evening is shown below. All photos courtesy of Al Cox.